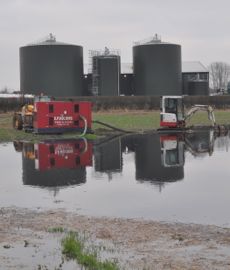 Environment Agency officials are due to work through a second night to plug a leak in the university’s flagship anaerobic digester system.

Thousands of litres of digestate – a byproduct from the renewable energy process – flooded adjacent farmland and entered nearby watercourses.

Emergency services were called to the university farm on Tuesday (19 February) after staff noticed one of the storage tanks was leaking.

An agency spokesman said: “They informed us that one of the tanks used to store anaerobic digestate was leaking as a result of a broken valve.

“A bund that was built to contain any leaks failed and the digestate flowed in to a nearby field.”

The agency used temporary dams across ditches, blocking up culverts and pumping the pollution out of channels, to stop the pollution flowing in to local watercourses.

Speaking at 4.30pm on Wednesday (20 February), the spokesman added: “Currently the tank is still leaking and we are working with our partners to mitigate the environmental impacts of the digestate and fix the leak.”

An investigation has been launched and Severn Trent Water have helped the clean-up by removing the pollution to their nearby sewage treatment works to be processed.

Swift action had stopped the flow of pollution into the Pipe Strine and the River Strine, following an incident at Harper Adams University College yesterday.

“Our priority is to minimise the impact to the environment and by working with our partners we have been able to achieve this in a reasonable timescale.

“We are continuing to work with them on and off site to address the leak, and contain and remove the pollution.”

Agency staff are continuing to deploy hydrogen peroxide in to the water at the confluence of the Rivers Strine and Tern (Crudgington).

High ammonia levels in watercourses nearby have prompted action to ensure that wildlife is not affected. No dead fish have been reported so far.

The hydrogen peroxide oxygenates the water, raising oxygen levels and enabling fish and other wildlife to survive. Pumps will remain on site until the risk to the environment has passed.

The spokesman said: “We have not received any reports of significant environmental impacts, however, we will continue to monitor the environment for the next few days.”

The Harper AD plant is powered by 11,000t of dairy and pig slurry and up to 12,000t of food waste that would otherwise have gone to landfill.

The spill involved by-product from the energy process leaking from a storage tank, rather than a leak from the power plant itself.

Shropshire fire service sent hazard materials officers and four pumping appliances to Harper after the leak was reported. No one was hurt in the incident.

University vice-chancellor David Llewellyn said staff had “worked extremely hard” through the night with local services to contain the incident.

The incident comes a month after researchers at Harper were awarded £150,000 to investigate AD as an on-farm method for the disposal of animal carcasses.