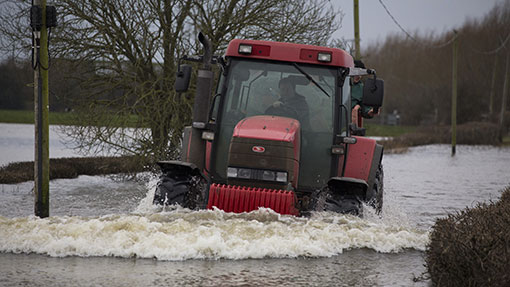 Landowners have called for an urgent flood management review after the Environment Agency (EA) said Britain must choose between protecting town or country from high water.

The Country Land and Business Association (CLA) made the plea following comments made in a newspaper article written by EA chairman Lord Smith of Finsbury.

In the article for the Daily Telegraph, Lord Smith said successive governments had given the “highest priority” to protecting lives and homes.

“I think most people would agree that this is the right approach,” he wrote. “But this involves tricky issues of policy and priority: town or country, front rooms or farmland?”

In response, the CLA said flood management must be looked at urgently.

The government must recognise the economic importance of agricultural land if Britain was to achieve food security – and ensure its budget was spent on flood protection across the board.

CLA president Henry Robinson said: “The government says it values food security but we are never going to maintain it if prime areas of agricultural land are at horrendous risk of flooding.”

“The government says it values food security but we are never going to maintain it if prime areas of agricultural land are at horrendous risk of flooding.”
Henry Robinson, CLA president

Mr Robinson acknowledged that there was a need for the government to reduce public expenditure in the current economic climate.

But he warned: “DEFRA and the EA must review their priorities if we are to maintain and improve our ability to feed ourselves.

“The government must also make it easier for landowners to maintain those defences the EA can no longer look after.”

Individual landowners were in some cases willing to take on the responsibility for defences, said Mr Robinson. But they were frustrated by huge amount of red tape and cost involved.

The government needed to look at internal drainage boards which had a track record of managing flood risks efficiently and effectively, Mr Robinson added.

“They work because they are run by people with a direct interest in preventing flooding. They are a perfect example of local decision-making that works and we need more of them.

“The government must do all it can to encourage their creation in areas where they do not already exist.”