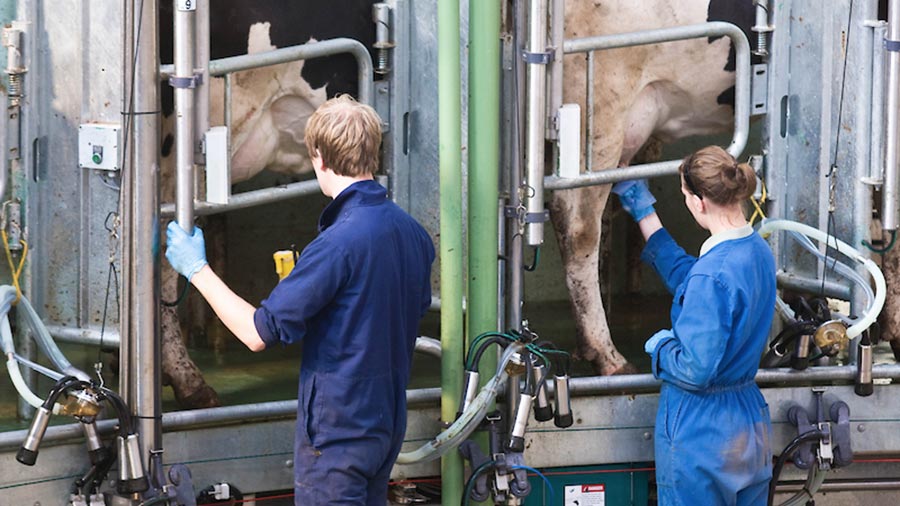 A chronic shortage of dairy farmworkers has hit milk production and pushed more than one in 10 farmers to the brink of quitting, a survey has revealed.

The research was carried out by co-op and processor Arla Foods, which warned the situation is likely to get worse unless the government acts quickly.

It blamed the crisis on Brexit constraints that halted the free movement of EU workers to Britain, and the lingering effect of the Covid-19 pandemic.

This had resulted in four out of five farmers reporting “zero” or “little” response from suitable candidates to adverts for jobs.

More than 60% of respondents said they were finding it more difficult to recruit than it was before the free movement of labour ended because of Brexit.

The labour shortage is already taking a toll on production and herd performance, with milk volumes down by 3% compared with last year. Arla said a small but significant number of farmers were taking steps to reduce production.

One in 20 had already cut the number of milkings, while 6% had reduced their herd size as a direct result of staff shortages.

Another 7% will be forced to follow that policy in the next 12 months unless action is taken, Arla warned. If nothing changes, 12% of dairy farmers said they will quit the sector in the next year.

The concerning results prompted Arla Foods management to call for an urgent response from government, including adding specialist roles like “herd manager” to the Shortage Occupation List. That would allow more workers from overseas to fill vacant positions.

Oxfordshire dairy farmer and Arla Foods board member David Christensen said the labour situation was the worst he had known in 30 years in the sector.

“We have to compete across all sectors for a pool of workers that has shrunk due to Brexit and Covid-19 issues,” Mr Christensen said.

“Unfortunately we must also compete with each other to make our own units stand out as the most attractive career options within the sector,” he added.

“It is a brutal fact, but you have to be better than your colleagues,” said Mr Christensen who runs 950 milkers across two herds. “It is a really difficult position, but it is not an insurmountable challenge.

“We must all up our game and offer a complete career package. It is not just about pay.”

Mr Christensen pointed to better working hours, a focus on staff development and greater involvement for workers in the business strategy and direction.

On his units, Mr Christensen has addressed work regimes and, over a period of two decades, improved equipment to make tasks easier.

He has also implemented a 5:30pm finish time for staff to allow them to have a life outside farming.

However, Mr Christensen said the whole supply chain must recognise any changes could only be made with a sustainable milk price.

“We cannot effect change if the milk price returns to previous levels of 30p/litre. Everyone in the sector must pull together to ensure milk production is on that solid foundation,” he said.

Arla said it had already engaged with the new Institute of Agriculture and Horticulture over the issue.

Mr Amirahmadi also suggested a new cross-departmental strategy to bring talent into food and farming, making it a career of choice for people from all backgrounds.

This would need to include on-farm training, teaching in schools and improved understanding by careers advice providers. It also required support for people wanting to change career and a marketing campaign aimed at promoting careers in our industry.

The unfolding crisis on dairy farms came in a week when Defra and the Home Office opened invitations to poultry businesses that may be interested in using an extended visa scheme for seasonal workers.

The announcement of 2,000 visas for seasonal poultry businesses was made as part of the National Food Strategy, published in June.

The departments formally opened the invitations during a meeting with the NFU on 5 July.

At the meeting government officials confirmed:

The NFU explained that visas would be available for workers arriving from 1 November 2022 and they would have to leave the UK by 31 December 2022.

Defra and the Home Office have committed to do all they can to bring forward the date workers can arrive, but this is subject to the tendering process concluding and scheme operators being appointed and functional, the union said.

On salaries and hours, the government has ruled that the visa scheme must not undermine the skilled worker route.

This means there will be a minimum salary set at £10.10/hour for roles classified as “unskilled” and a pro rata hourly rate for “skilled” roles.

There will also be a minimum number of hours that must be offered to each worker.

Further information from the government should be made available on this shortly.