How Scottish farmers and crofters can drive profit and growth during these uncertain times was a key focus at this week’s NFU Scotland conference in Glasgow.

Farmers Weekly’s deputy news editor Philip Case spoke to Mr Walker at the conference to find out his views on how the union will lobby officials on Brexit farm policy in the coming months. 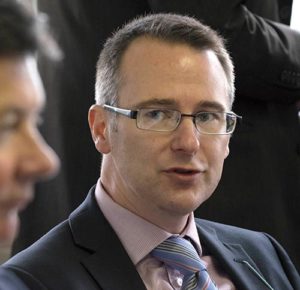 What was the key focus of the conference?

Profitable growth. We have a very successful food and drink industry, but up until now, farming hasn’t benefited from that growth. We need to move to a situation where we can grow the industry so that every farmer benefits.

We need a strong agricultural policy that supports production. While Scotland will have a lot of the tools, it’s only disposable in terms of what sort of policy best fits Scottish agriculture.

There will be some things that quite appropriately should be done at the UK level, because it makes sense to do it at the UK level. But that has to be a choice, a buy-in for Scotland and others to do so.

Wouldn’t it be simpler to have a “common” UK Brexit farming policy agreement?

I don’t believe there is simply a blunt choice – for example, everything must be UK or Scotland. It is more nuanced. Instead, the powers should be set with the person who is most accountable for the delivery of that.

Through the common agricultural policy (CAP), the Scottish government has been responsible for delivering that policy here in Scotland. I see no reason why that should change.

We have to take self-sufficiency more seriously. We have great produce, so let’s drive up production. Consumers want the product. They want the choice.

Likewise, there will be some issues that you have to tackle on a UK basis, collectively. Instead of being driven by ideology, that’s where the debate should be. We have to feel we can act together.

Should the UK government abolish direct farm payments after 2020?

Short term, if you turn the support tap off for Scottish agriculture, the structure would disappear overnight. It’s not just farms, but all the support structures around them. It would decimate the food industry in Scotland, local communities.

Is Britain’s food self-sufficiency at risk from reliance on overseas imports?

Our self-sufficiency in food has declined over the past 20 years. Imagine if the recent headlines about courgette rationing had been about no beef, bread or milk? There would have been riots everywhere.

We have to take self-sufficiency more seriously. We have great produce, so let’s drive up production. Consumers want the product. They want the choice.