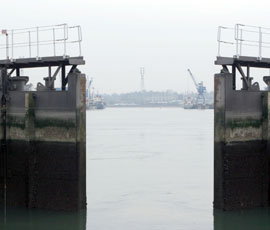 No more livestock exports are planned from Ipswich, owners of the Suffolk port have confirmed.

The RSPCA said it was “delighted by the decision” arguing that Ipswich port did not have suitable facilities for the handling of animals should emergencies arise.

The trade moved to Ipswich a week ago after livestock exports were suspended earlier this month from Ramsgate in Kent.

Some 46 sheep died after a consignment was unloaded from a truck at Ramsgate. Two drowned, two suffered broken legs and a further 42 were shot on veterinary advice due to lameness.

The RSPCA has mounted a vigorous campaign against livestock exports, describing it as a vile trade that causes suffering to animals.

But exporters argue that animal welfare is a top priority, with shipments providing access to an important market for UK livestock producers.

One sailing of sheep to the continent has taken place from Ipswich. The vessel involved is the MV Joline, a former Russian tank transporter converted for animal transport.

“There is no place in a civilised and compassionate society for this vile trade that causes so much suffering to animals.”
Gavin Grant

The RSPCA said the crossing to Calais took over 15 hours, arguing that the length of the journey called into question compliance with EU animal welfare regulation.

RSPCA chief executive Gavin Grant said: “I am delighted that Associated British Ports have suspended this dire trade. They are taking their responsibilities seriously to the animals.”

He added: “There is no place in a civilised and compassionate society for this vile trade that causes so much suffering to animals.”

The RSPCA is calling for the end of long-distance transport, with an eight hour maximum journey time for all animals travelling for fattening and further slaughter.

Mr Grant said he had raised the issue with farm minister David Heath.

“I continue to be in touch with Mr Heath and am meeting the [European] Commission again in the coming weeks to brief them on these important developments.”