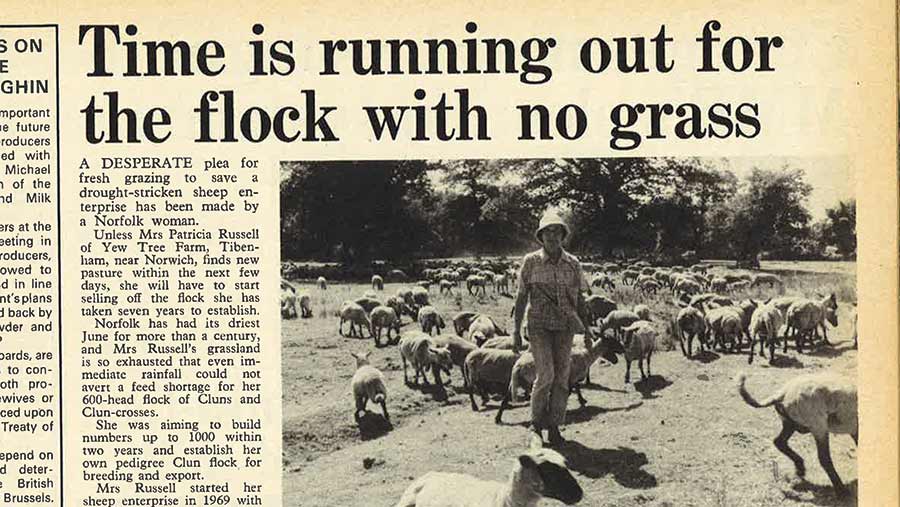 I was only five at the time of last drought. I know – it’s hard to believe. No, not that I am nearing 50… rather that it has taken 42 years of waiting for another drought, especially considering that every other British weather event seems to be surpassed on an annual basis.

Carol Kirkwood, the BBC’s weather guru, is running out of superlatives. Each morning she cheerily tells me what the weather gods are going to deliver that day. Last winter was the wettest since the year before. The “Beast from the East” was the biggest beast from those parts for a year or so.

Global warming it may be. But for a consistent period a drought has been a weather phenomenon we have thankfully avoided. The jet stream favours Marbella over Margate.

Other than farmers who grow Cornettos and Fabs, I can’t think of a crop or animal that thrives in the drought. The implications for a light land arable business is painful. But this pales against the emotional anguish and financial pain being felt by livestock farmers.

However, reflecting on 1976 – albeit through the eyes of a young nipper growing up on a farm with a few crops and pigs – there has definitely been some progress.

I have a clear vision of Pete the combine driver, caked in dust and wearing a strange white helmet. This headgear, sported by the most forward-thinking combine drivers, wouldn’t be tolerated today for as long as it takes to send a Snapchat.

For those under the age of 30 it may be hard to believe, but at the time of the last drought combines didn’t have a fridge, hands-free GPS and a massage chair. You were seated above the cutter bar in the elements. There was just enough room for a Thermos flask between the diesel tank that you sat on and a large lever that you needed biceps like Rafael Nadal to move.

The stormtrooper-like helmet was supposed to cool the head of the driver. It had a small fan at the rear. In actual fact, it blew warm, stinky air and dust in your face until the battery ran out.

There was no listening to Test Match Special in the cool, sipping a cappuccino and nibbling on a Pret-A-Manger sandwich. A hot drink was a lottery. The glass inside of the Thermos would often shatter as you yanked it out of its special home. The reward was a mug full of mirror-like material, stewed tea and a layer of dust.

My other abiding memory of that summer was the silver-arched booth that housed the telephone in the lobby of the hotel we stayed at. That was where I remember my father spending harvest, thrusting 2p pieces into a payphone like a gambling addict playing slotties in a casino.

My father wanted regular harvest updates from the guys left sweltering on the farm. (There can be few things more irritating than being hassled about harvest progress by someone clutching a pina colada while you are enduring the same weather, albeit without the flip-flops and the straw hat.)

We returned from our supposedly “pre-harvest” family holiday the day before the harvest was actually over.

Bales were still to be stacked – all of them by hand. And ploughing was halted until the ground softened. Back then, tractors weren’t powerful enough to override common sense.