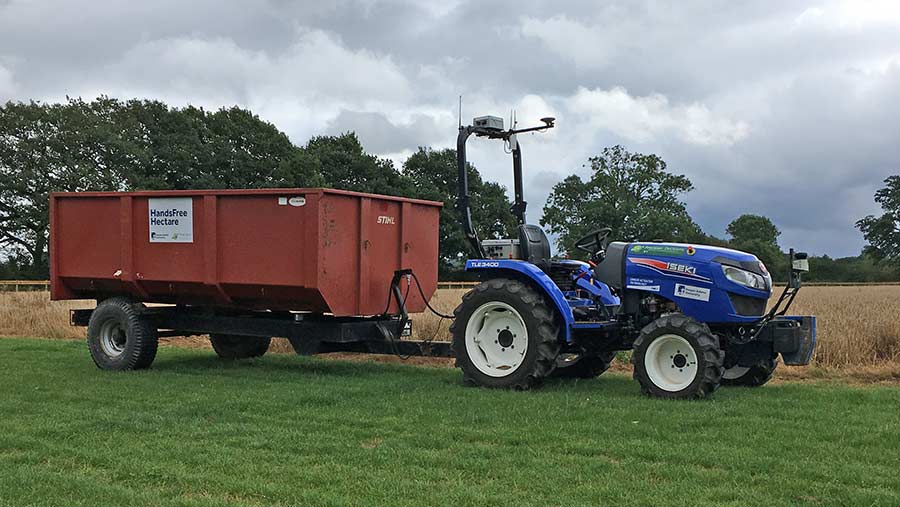 I am one of those people who refuses to use the unmanned aisle at the supermarket.

I’ll wait patiently in line to talk to an actual teller at the local bank, and I genuinely can’t think of many things worse than having an Alexa in my house.

Perhaps I’m permanently scarred from watching The Terminator too many times as a child, or maybe I just enjoy human interaction.

So it was with a degree of trepidation that I headed off to my old stomping ground, Harper Adams University, to witness the famous Hands Free Hectare harvest in operation back in August.

What would greet me on arrival, I wondered? Perhaps a row of intimidating and official looking men in black would be lining the entrance to the engineering block, sternly checking passes and only allowing sanctioned journalists in.

I needn’t have worried, however, as the very first person I saw was, in fact, a man with a grey beard and a beige jacket; Labour leader Jeremy Corbyn, to be precise, there for a sneak preview on a two-day trip to Shropshire.

So instead of a security grilling, it was inside for polite greetings and introductions and that most human of activities, tea and biscuits, followed by a PowerPoint presentation, before we ventured out, en masse, to the field to see the big event.

Now, to be confronted by a 35-year-old trial plot combine and a vineyard tractor is hardly a vision of the sort of future one might expect in an HG Wells novel. But it’s precisely that which makes the whole thing so exciting.

These aren’t machines that look like they could have been made by NASA, but old equipment combined with cheap drone technology and electricals bought off ebay.

And unlike most of the monstrously large and increasingly unaffordable machinery on display at the big agricultural shows these days, it all feels, well, attainable.

It is slightly disconcerting to start with, seeing it in action with no human on the seat.

But I imagine it’s not too dissimilar to how my great grandfather felt the first time he saw a tractor in operation, after a lifetime of working with horses.

A feeling that this was simultaneously the end of something old while also being the beginning of something new.

Indeed, there is a glorious eccentricity to it all that feels like a throwback to a time when Britain ruled the world.

For when they couldn’t quite get combine and tractor to line up properly for unloading the first time, they kept calm and carried on.

And when they did, and the wheat came spilling into the trailer, there were triumphant grins and applause all round. In truth, the whole thing was more Great Escape than Blade Runner.

With an idea that was conceived down the pub, over a pint, these visionary and highly capable young men, with a relatively shoestring budget, have built and achieved something that could help to catapult UK agriculture forward by decades.

We are truly on the cusp of the next agricultural revolution. I have seen the future of farming, and it is hands free.