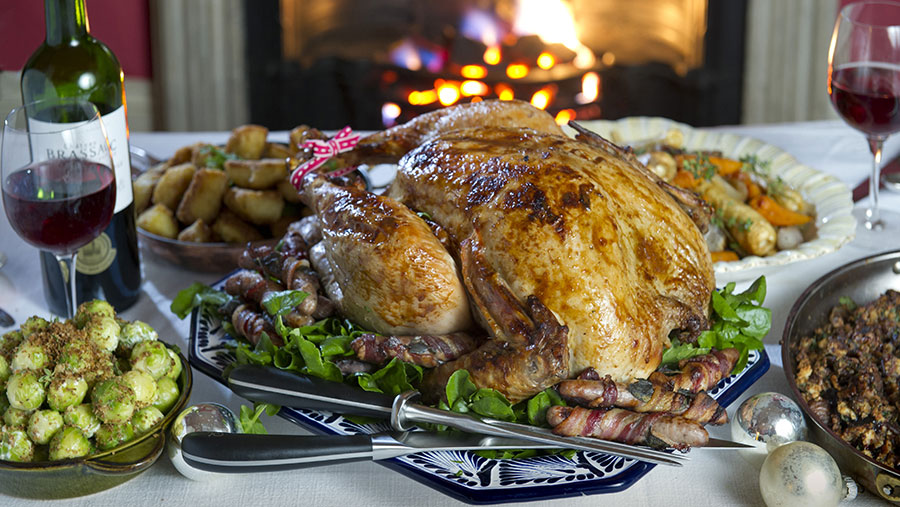 What will you be serving for Christmas lunch this year? For me it must be the same every year: turkey covered in streaky bacon, pigs in blankets, sprouts with chestnuts, and a variety of tasty veg and stuffing.

Every year, we have the same conversation, “maybe we should do something different”, but tradition always wins.

I certainly won’t be opting for any of the meat- and dairy-free options  supermarkets and celebrity chefs are determined to push on us this year.

Jamie Oliver, well-known for his TV Christmas specials, recently posted a blog on “vegan puds and party dishes”, and his website even has a “festive vegan hub” – which sounds like a thrilling place to hang out.

See also: The best way to get Americans eating our lamb

Admittedly, all the recipes look very appetising and feature many ingredients which could be sourced from British farms.

But it still highlights the profound influence  vegan groups are having on the British food industry through their clever marketing and use of social media.

Marks & Spencer’s festive menu contains more vegetarian main courses than meat ones, and Asda has been promoting its “delicious and vegan” mince pies.

Tesco, launching its biggest ever meat-free Christmas menu, has even gone as far to appoint Derek Sarno, self-proclaimed “plant pusher” and former global executive of Whole Foods Market, as director of plant-based food.

His role is to “help more customers enjoy more plant-based foods” – or more cynically, to help Tesco capitalise on a lucrative and growing market where significant value can be added to basic veg.

When I was at primary school, the Christmas meal usually included crumbed chicken in some sort of festive shape, potato croquettes and peas, followed by an ice-cream in the shape of a reindeer.

We also got the cheapest possible cracker which contained something small and useless like a plastic paper clip.

Things have moved on since then, and the traditional Christmas meal is a great way for school children to enjoy a nutritious wholesome meal, hopefully sourced with British ingredients.

I just hope it doesn’t fall on a Meat Free Monday, which seems to be the latest fashion for schools to adopt, supposedly as a way of promoting healthy eating and environmental issues.

More likely it is a thinly veiled attempt to cut costs, probably at the expense of low-income children who are already struggling to get enough nutritious food into their diet.

For readers of Farmers Weekly, I am probably preaching to the converted. I know you are mostly British meat’s biggest fans and supporters. I doubt many of you will be serving turmeric-spiced-cauliflower Wellington as your Christmas centrepiece.

But in 2018 it will be vital we all redouble our efforts to promote our brilliant British food industry.

Dairy UK and the AHDB have recently launched a campaign introducing the hilarious Department of Dairy Related Wholesome Affairs.

It’s aimed at 18-to-36-year-olds, exactly the group who are being so strongly influenced by anti-farming messages.

These are the people buying food for their families, who worry about its provenance, the ingredients and the health benefits or otherwise.

The campaign is largely social-media based and, if we get behind it, it could be a powerful counter argument to the negative messages out there.

It would be great to see something similar for British meat. So let’s get behind it and spread the positive word.