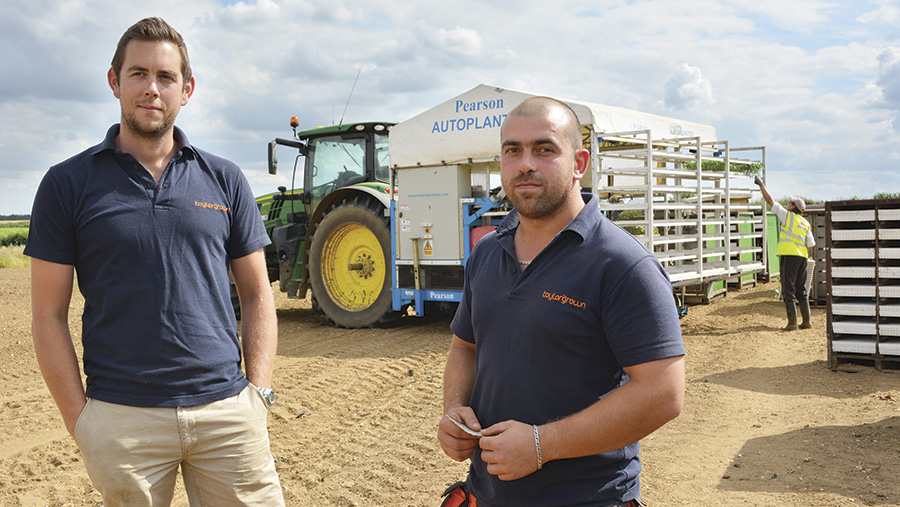 When award-winning vegetable grower Joe Rolfe needs his brassicas weeding, an army of people descend by the busload on the farm.

Horticulture is notoriously labour intensive – and even more so when the enterprise is completely organic.

“As an organic producer we don’t use any agrochemicals.”

Based at Houghton, near King’s Lynn, Taylorgrown is owned by Produce World. As well as using no chemicals, it receives no subsidies and owns no land – renting it instead from the 1,600ha Houghton Hall estate that is its landlord.

Proud of being able to compete on the open market, Taylorgrown has won a number of accolades, including supplier of the year from Sainsbury’s.

But like many growers, Mr Rolfe fears success could be undermined without continued access to workers from overseas.

The UK vote to leave the EU has big implications for UK horticultural businesses – especially if the government chooses to curtail immigration and migrant labour post-Brexit.

Taylorgrown alone employs more than 100 people – almost all from overseas.

Of eight full-time staff on the farm, five are from eastern Europe, including the farm’s tractor drivers.

All the overseas workers started on temporary contracts before impressing so much that they were taken on full-time, says Mr Rolfe.

A further 120 seasonal workers are employed for up to 12 weeks each summer, mainly hand-weeding crops, with 30 or so staying on until autumn.

All our main tractor drivers are from Bulgaria or Lithuania – they are the core of our farm business Joe Rolfe, Taylorgrown

Mr Rolfe has tried to recruit locally, but to no avail – even though all overseas workers receive English wages.

“They are courteous and hardworking.

“The only English people on the farm are myself, our farm secretary Claire and our apprentice, Alex.

“All our main tractor drivers are from Bulgaria or Lithuania – they are the core of our farm business.”

“We have advertised locally for staff several times in the past at every level.

“We have really struggled for applicants, let alone applicants that are good enough.

“It is a scary thought to think that we would have to rely on local or even national staff.”

The decision to leave the EU took everyone on the farm by surprise, says Mr Rolfe.

“I don’t think any of us thought we were going to end up with a Brexit vote until the night before.

“We still don’t know what it means.

“Even now we don’t know what the eventual outcome will be.”

The farmworkers feel confused, he adds.

“If you are talking about our wider business, there are a lot of upset people. They feel rejected and they are worried that they will get kicked out of the country. So are we. It is not a nice situation to be in.”

Growing pest-free brassicas organically is particularly challenging, with write-offs of 80% not uncommon.

They feel rejected and they are worried that they will get kicked out of the country. So are we. It is not a nice situation to be in Joe Rolfe, Taylorgrown

Wastage is reduced by covering crops with netting to minimise pest damage, but it remains a risky business – with a fine line between profit and loss.

Finding seasonal staff has become harder since the government abolished the seasonal workers scheme at the end of 2013.

It had helped bring more than 22,000 people from Bulgaria and Romania to work temporarily on UK farms annually.

After all restrictions were lifted in 2012, many of those workers took jobs in other sectors, causing a shortfall in agriculture.

Some 29% of growers experienced problems recruiting enough labour last year, according to a recent NFU survey.x

With agrochemicals not an option, Taylorgrown is increasingly investing in robot weeders as an alternative to hand-weeding.

But not everything can be mechanised.

Manual labour – and a lot of it – will remain a fundamental part of the business for the foreseeable future. Hand-weeding takes up to eight weeks every year.

It involves as many as 120 people working in teams of 20.

Each person lies face down about a foot above the ground on a rig pulled by a tractor.

Crops are weeded by hand as the rig moves over the field at a rate of 2ha/day.

“I have a lot of respect for our staff,” says Mr Rolfe.

“We put a lot of emphasis on having the right people in the right jobs. We have regular sit-downs with the team – and discuss everything.

“I believe the whole business benefits if staff feel they have ‘ownership’ of the crop.

“In the back of my mind, I’m hoping that the worst case scenario will be the reintroduction of something similar to the old seasonal workers scheme.

“But when you think back to those days, people were often living in camps; our employees are part of the local community.” 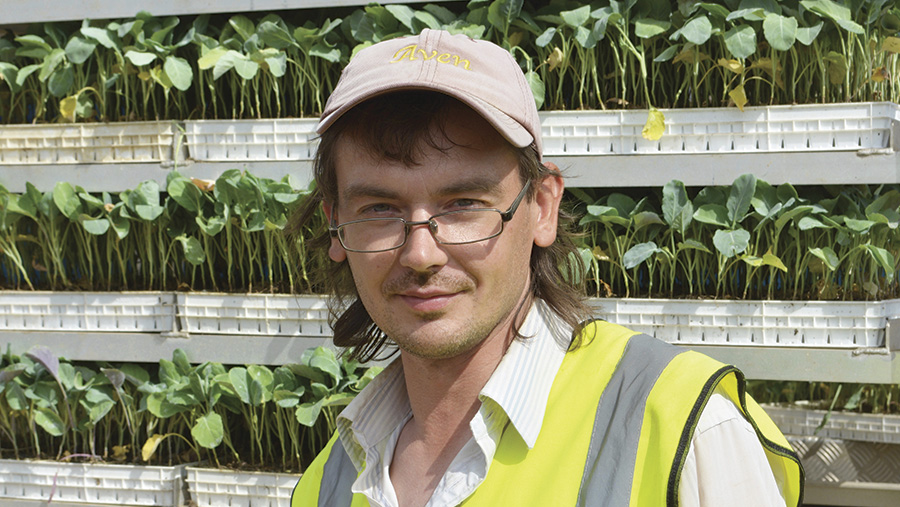 Lithuanian farmworker Valdemar, 40, has been working in the UK for two years as a seasonal agricultural labourer.

“I work in the fields – anywhere I am needed,” he says.

“The main reason I am here is because it is a better job than back home. I hope to stay, but after the referendum I don’t know how long I will be allowed to remain.”

Valdemar declines to give his surname.

But like many seasonal workers in the area, he is employed through Aven, an agency which provides experienced and skilled seasonal staff to all sectors of the agricultural and horticultural industry. 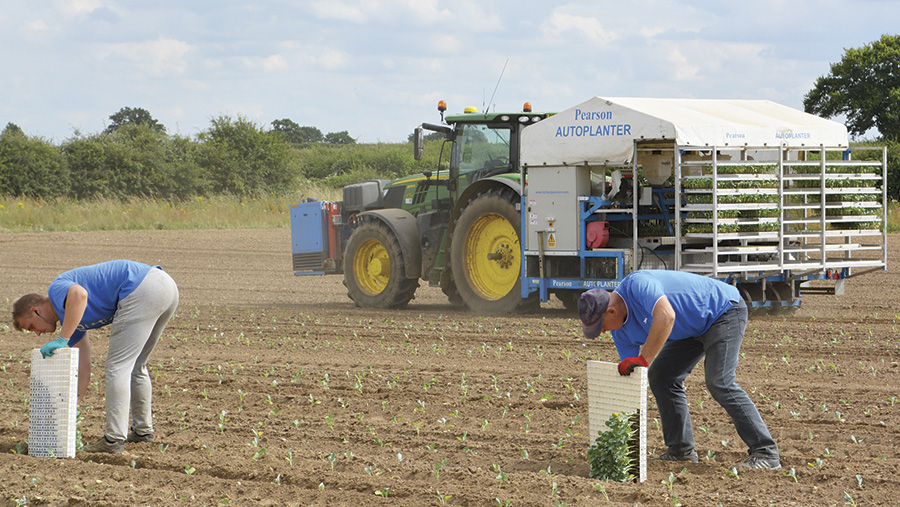 Based at King’s Lynn, Aven was established in 2003.

Today, it supplies workers to more than 50 companies across East Anglia. Jobs vary from tractor and forklift drivers to packhouse operatives, pickers, planters, weeders and graders.

While UK farms struggle to find local labour, Aven has a long list of job applicants from overseas.

“We work hard to ensure our clients benefit from an efficient and flexible workforce,” it says.

Agricultural technician Angel Angelov, 28, has worked in the UK for three years.

A full-time Taylorgrown employee, his main responsibilities include land preparation and carrot harvesting. 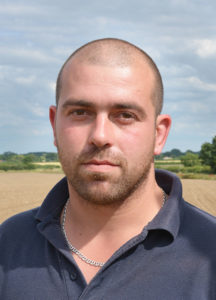 Mr Angelov says he understands why people voted for Brexit.

“I pay my bills and my taxes and I work,” he explains.

“But sometimes you see people from another country who come here with two or three children and they are on benefits.”

Having settled in the UK with his Bulgarian girlfriend, Mr Angelov has learned English and has no intention of returning to eastern Europe unless he has to.

Norfolk is his home now, he says, and he hopes to one day start a family here.

Overseas workers who pay their way should be allowed to stay in the UK, believes Mr Angelov.

But those who don’t shouldn’t be given the same privileges.

“They contribute nothing and the country is paying for them,” he adds.

‘Government must find a solution’ 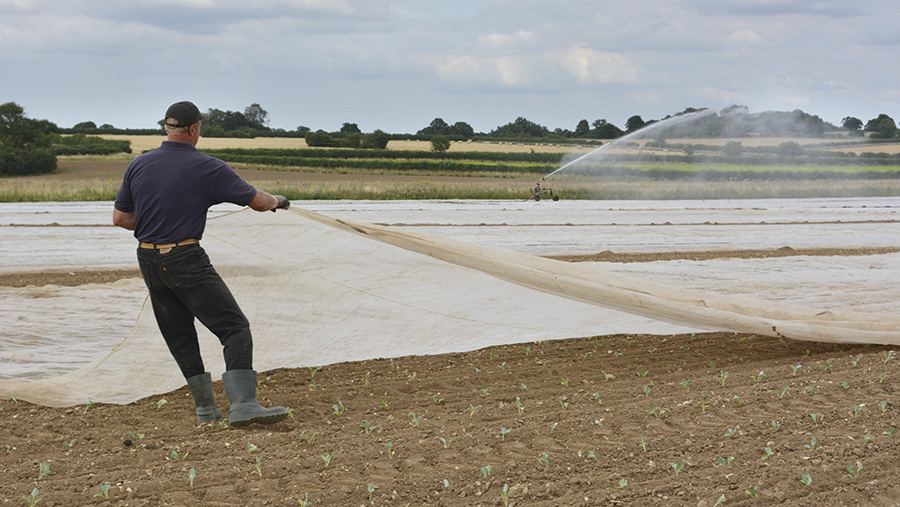 The prospect of more restrictions on immigration following the UK’s decision to leave the EU has created “huge uncertainty” for growers, overseas workers and the wider supply chain, says NFU horticulture board chairman Ali Capper.

“Effectively this could end the free movement of labour from the European Economic Area. We need to be prepared to explore all the possible options in maintaining access to horticulture’s vital labour supply.”

The NFU has urged Brexit minister David Davis to meet farmers and find a way forward.

“This could involve some form of visa-restricted access to labour,” says Ms Capper.

“We need to investigate the specifics to ensure we have the workforce this industry needs.”

Without adequate labour, many crops would go unharvested.

Ms Capper adds: “We are not just talking about access to seasonal labour – some sectors and businesses are currently reliant on non-UK workers in full-time roles, year-round.”