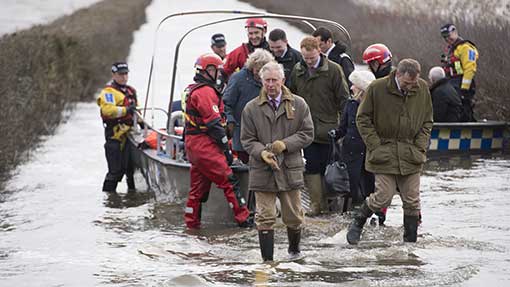 Prince Charles described the Somerset floods as a “tragedy” that has gone on too long as he visited farmers and rural residents battling against high water.

The Prince of Wales visited the villages of Stoke St Gregory, Muchelney and Langport on Tuesday (4 February). At one point during the visit, he travelled by tractor and trailer through floodwater which has engulfed much of the area since Christmas.

Expressing his sympathy for flood-hit farmers, Prince Charles met local residents at Stoke St Gregory village hall. “There’s nothing like a jolly good disaster to get people doing something,” he said. “The tragedy is that nothing happened for so long.”

Farmer Heather Venn, who met the Prince, said she had almost 300 acres of land under water. Left with no grazing, the family had been forced to bring its beef suckler herd indoors and it would be difficult to buy in feed, Mrs Venn told Farmers Weekly.

“The situation is dire and it is getting worse. We are very pleased Prince Charles has taken an interest. He certainly has a clear understanding of agriculture and the effects of the water. He engaged with people in a way that was very positive.”

Emergency funding worth £100,000 will be donated to farming charities and flood-hit communities following the royal visit. The Prince’s Countryside Fund said it would donate £50,000 – an amount that will be matched by the Duke of Westminster.

Earlier, Environment Agency chairman Lord Smith came under fire from farm leaders and conservationists after warning that limited resources mean “difficult decisions” had to be made between protecting homes or farmland from floods.

The peer spoke out following accusations that the agency’s refusal to dredge rivers has exacerbated the situation. An estimated 12,500ha remain under water. Roads remain impassable and much of the land has been flooded since Christmas.

“Successive governments give the highest priority to lives and homes, and I think most people would agree that this is the right approach,” Lord Smith wrote in The Daily Telegraph. “But this involves tricky issues of policy and priority: town or country, front rooms or farmland?”

The NFU and the Country Land and Business Association both said the government should learn lessons from the floods. Adequate resources must be directed at flood prevention, said NFU deputy president Meurig Raymond. “It is not an overly simplistic argument of one versus the other.”