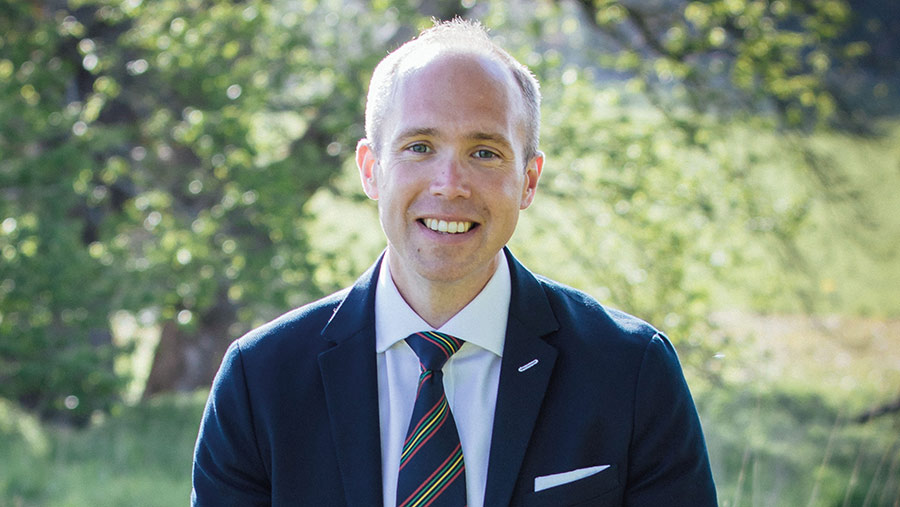 Aled Rhys Jones, 35, has big shoes to fill when he takes up his new job as chief executive of the Royal Welsh Agricultural Society (RWAS) in September.

He will be following in the footsteps of various chief executives who have collectively elevated the four-day Royal Welsh Show to its position as one of Europe’s leading agricultural events.

As a man who was once its assistant chief executive, he is unfazed by that expectation and is brimming with ideas on how to take the show and society forward.

Here he explains how he sees the show and Welsh farming developing – and what his priorities are.

What are the threats for the show?

The most immediate challenge is dealing with the impact of inflation and the rising cost of living.

Since 2019, the costs of staging a show – hiring equipment, tentage, stables – have gone up by almost 30%, but we have gone through tough times before and we will again.

The rising cost of living is also having an impact on people’s disposable incomes and that could filter through to visitor numbers; added to that we have lost some previous exhibitors that are no longer operating post-Covid.

It is a big challenge, but while livestock numbers have been slightly down on 2019 at some shows, I think the fear of missing out will bring exhibitors and visitors back.

And what are the opportunities for the RWAS?

We stage three major events a year, but there are opportunities to host many more.

The showground is one of the finest in the UK for infrastructure and buildings, plus we have excellent 5G and superfast broadband communication.

In the longer term, we need to look at the commercial relevance of our shows in the context of the changes that will happen to farming in the next 10 years.

The Basic Payment Scheme will be withdrawn and the Sustainable Farming Scheme introduced in Wales.

The impact of trade agreements will filter through, there will be a huge pressure on land use, an expectation on farmers to reach net zero and increasing regulation.

As such, we will have to evolve in step with the industry and be here to support our Welsh farmers, through events and our educational remit.

What are your top priorities?

We surveyed visitors in 2015 and 66% didn’t work in agriculture, while more than one-third had no farming background whatsoever.

There will increasingly be this divide as people lose their emotional connection with and understanding of agriculture. Our role in providing that connection will be more important than ever.

In realising this ambition, I have three main priorities – finance, people and new ideas.

We need a strong financial base, to work closely with the talented team of staff, volunteers and members, and a constant flow of new ideas. People like the comfort of tradition with the excitement of the new.

Covid has put the future viability of many UK agricultural shows under threat. How is the RWAS coping financially?

We have weathered the Covid storm remarkably well. Clearly there were huge financial challenges, but through sound management and support from the Welsh government, the society has managed to preserve its solid financial base.

Are you optimistic about the future of Welsh farming?

Very optimistic. I think we have reached a point where businesses won’t need to get bigger to be profitable and sustainable. There will be opportunities that won’t require scale.

Family farms, which form the backbone of Welsh farming, are incredibly resilient, and I am constantly impressed by their efforts to improve production efficiency and seek out new enterprises – whether that’s in agri-tourism, direct selling of food, renewable energy projects or selling public goods.

How can we attract more young people to consider farming careers?

The RWAS is not just the shows, we are a charity that promotes agriculture and we want to encourage young people to buy into that vision through our bursaries, awards, new leadership programme and many other initiatives. It is about giving young people the opportunities.

Getting them involved in the RWAS is one approach, we need to have one eye on a succession plan for our next crop of stewards and volunteers.

Aled Rhys Jones was born and raised on his family’s hill farm in Cwrt-y-Cadno, north Carmarthenshire, and now lives in Llandeilo.

He studied land management at the University of Reading, later qualified as a chartered surveyor and was admitted as a Fellow of the Central Association of Agricultural Valuers (CAAV).

In 2018, he became CAAV’s chief operating officer and used his skills in broadcasting to become the lead presenter of the BBC Radio Cymru farming news programme.

His spare time is spent with his family, running with Amman Valley Harriers, and helping his wife with her coffee and wine shop in Llandeilo.