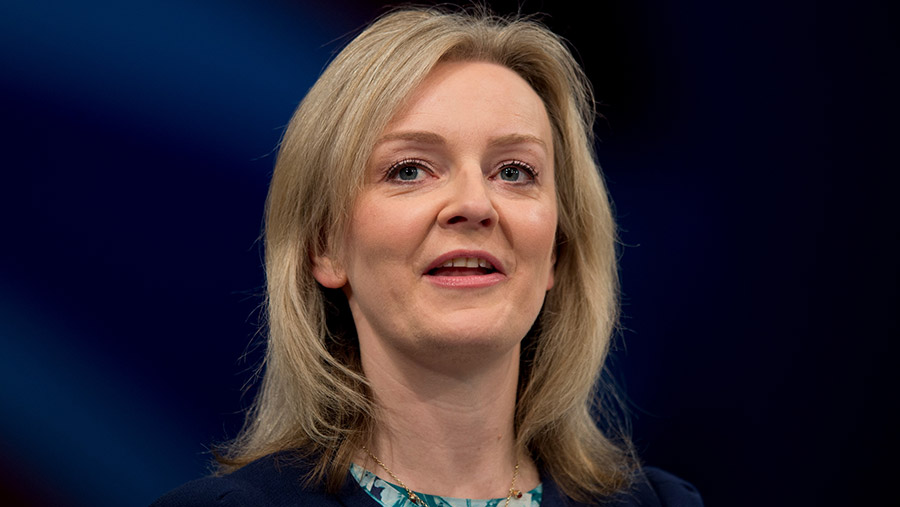 Defra secretary Liz Truss visited a windswept Hampshire farm on a rainy Friday (22 January) to announce the rediscovery of harvest mice in the area.

During her visit, Ms Truss gave Farmers Weekly an exclusive update about Defra work on the status of farm payments, CAP simplification and Countryside Stewardship, the EU referendum and the badger cull.

How can Defra encourage more farmers to enrol on stewardship schemes?

At the moment, we are working on a 25-year environment plan, which is going to mean much more integration across what Natural England, the Environment Agency and organisations such as the Rural Payments Agency do.

That will make it easier for farmer groups to get together, like we have seen today, and do things for example that potentially help alleviate floods, but also encourage wildlife and nature too. What I want to do is make this approach “business as usual”.

Whether we like it or not, farmers are going to have to farm differently in the future, aren’t they?

I think farming is already changing. We have seen huge steps forward in terms of the environmental schemes that have been put in place.

In this part of the world, the fact that we are seeing the harvest mouse and the barn owl, the resurgence of these species shows that farmers are doing it differently.

Also, techniques such as precision farming, reducing inputs and the use of pesticides – all of these things are changing the way farming operates.

I think it’s very important to point out we can improve farm productivity and outputs for farmers at the same time as helping the environment. Those things aren’t contradictory. They are part of the same thing.

If you look at pollinators, one of the new options in the Countryside Stewardship scheme is the wildlife and pollinator package. We need pollinators to service the crops, so it’s very important that we maintain the environment as well as improving our farm productivity.

How can we increase the take-up of Countryside Stewardship?

We are in the first year of the new Countryside Stewardship. We have got the level of applications we were hoping for, given the ability to process them this year.

Obviously, we will be wanting to see more next year. Also, we will be working to make sure that those new schemes are less bureaucratic and more farmer friendly.

There are new requirements from the European Union, which is an issue and I have been pushing commissioner [Phil] Hogan to make those requirements simpler.

We need to see reform in greening. I would also like to see the environmental schemes simpler to administer as well.

What I want farmers doing is working on farms to improve productivity, improving the environment, not filling in forms and taking photographs of things.

How will Defra be responding to the current EU public consultation on the first year of CAP greening?

My ultimate aim is to see the three-crop rule abolished. I don’t think it makes an environmental contribution. It is a big problem for farmers. I have heard this today [22 January] in Selborne, I heard this yesterday in Northamptonshire.

Farm contractors were telling me it has added 10% to their costs. This is something which doesn’t deliver for the environment, but it is increasing farmers cost and it’s a bad thing.

I want to see the ecological focus area [EFA] rules simplified in general. I also want to see changes to the cross-compliance and inspection regime.

In my view, we need to use technology more and look at the outcomes farmers are achieving, rather than having a very bureaucratic process. That’s what I’m pushing for at EU level.

Owen Paterson told the Oxford Farming Conference a British exit from the EU would free up £9bn for UK agriculture. He argued that British farmers would be better off financially than under the CAP. Is he right?

We are currently in the middle of a renegotiation to reform the UK’s relationship with Europe. One of the aspects of that renegotiation is making Europe more competitive and less bureaucratic.

We have talked about what I am doing in terms of pushing that on the CAP because there is a lot of bureaucracy at the moment, which costs farmers extra money. It also diverts people from running a successful business into form filling, which none of us want to see.

There are benefits of being in the European Union in terms of the single market, which is very important for farmers. But ultimately we need to see the outcome of the renegotiation.

We have got every confidence that the prime minister is working as hard as he can to secure a better deal for Britain and we will put that to the people once the time comes.

Would an EU exit be a tragedy for the UK economy and for UK agriculture?

What I think is that there are costs and benefits about being in Europe. I have talked about the costs, which are the bureaucracy, lots of compliance rules, which people rightly complain about.

But there are benefits in terms of the single market. I think it’s about weighing up those costs and benefits after the renegotiation and seeing which is better.

How can Defra help farmers, especially those who won’t receive their single farm payment until the spring?

First of all, we have now paid 66% of the Basic Payment Scheme payments. Clearly that’s no comfort for people who have not yet received the payments, but I am putting all possible resources into the RPA to make sure they have got as much help as possible in terms of delivering those payments as quickly as possible.

Those farmers who unfortunately are going to be paid later in the payment window have been sent a letter which they can use with their banks to bridge over that period.

I think the long-term prospects for farming and food production in this country are very positive. We are going through a very difficult period at the moment.

But global demand for food is rising. There is huge demand for British products in other countries. Recently, we have been to China and opened the market for barley and pig trotters.

What is the ultimate goal of Defra’s new Great British Food Unit?

We are exporting more British products. Yesterday, Defra launched the Great British Food Unit, which is all about getting our exports up to the levels in France and Germany. At the moment, Germany exports twice as much food and drink as we do in the UK. I think we can get up to those levels.

I think British standards are extremely high. We have the highest standards in the world for animal welfare. We have got very high standards of food traceability and food safety. I am determined that we carry on promoting British food and getting that message across.

For example, someone like Weetabix, where I was yesterday, they are investing more in that plant and all of the wheat they source is wheat grown in Britain.

When there is more exports and more Weetabix sold in the UK, that has a knock-on benefit for the farmers locally. Those farmers have contracts with Weetabix and all that supply.

They are producing exactly the type of wheat that is needed for the products. I think that integrated supply chain, working together producing the products that people want is a great strength. I think we can build on that.

Can you tell us which areas Defra is going to roll out the badger cull to later this year?

The badger cull was successful last year insofar as the targets were met in all three of the areas and the chief vet has been clear that that has disease control benefits.

He said to realise these benefits we now need to do it over a wider area. But clearly the areas that are doing it will have to be ready in order to carry that out.

I do believe that we do have to carry it out over a wider area and that’s being worked on at the moment.