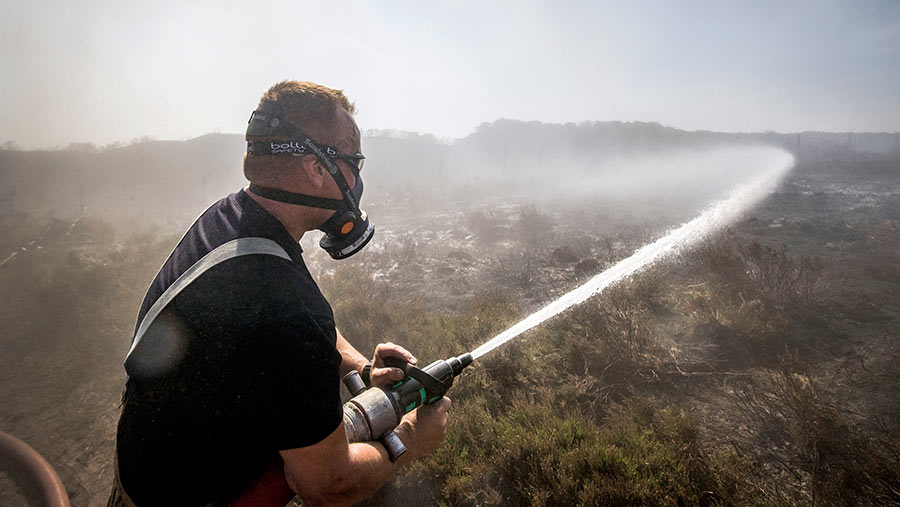 The National Sheep Association (NSA) has warned more wildfires are likely if proposals are pursued to rewild the UK’s upland areas.

The association made the claim as firefighters continued to battle a huge blaze on Saddleworth Moor, overlooking Greater Manchester.

Hot, dry weather and the removal of livestock that grazed upland areas to create natural firebreaks meant similar wildfires in the area could become more widespread, it warned.

NSA chief executive Phil Stocker said: “Wildfires are becoming more common across the UK, in part due to a loss of grazing animals and an increase in high volumes of dry vegetation.”

The result was “immense environmental damage” including the loss of peat and the release of carbon into the atmosphere, the destruction of wildlife – and a risk to human health, he added.

“The grazed nature of most of our uplands has, in the past, protected us from out-of-control fires, meaning that when fires occur, as they inevitably will, they are short-lived and relatively easy to get under control.”

As the devastating wildfire continues to rage over Saddleworth Moor NSA is warning of the increased risk of similar disasters if proposals to rewild many of the UK’s upland areas are pursued. Read the full NSA press release on this at https://t.co/QktZSrem4T pic.twitter.com/9hleKR31qU

Mr Stocker insisted he wasn’t trying to score points from the Saddleworth Moor fire and said he wanted to extend sympathy and concern to all affected by the blaze.

“However we do feel the need to point out that moves to rewild many of our upland areas would put far more and far larger areas at risks.”

It’s not surprising that shooting enthusiasts and those who serve them are seeking to deny this fact. But the #SaddleworthMoorFire started and spread across grouse moors, whose management is likely to make them highly vulnerable to wild fires of this kind. https://t.co/NzaVrNGoF8

That claim was rebuffed by the Game and Wildlife Conservancy Trust, which said Mr Monbiot was “daft” to claim the uplands should be covered in trees which didn’t burn.

NFU vice-president Stuart Roberts called on everyone to take care when visiting the countryside.

With such devastating scenes as those from #SaddleworthMoor please please remember to be responsible when visiting the beautiful British Countryside. Discarded cigerettes or glass bottles for example can have huge consequences.