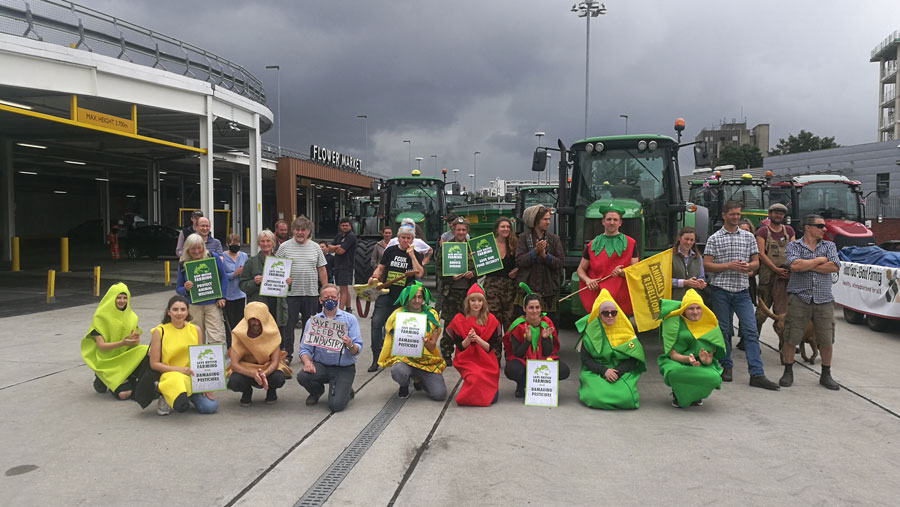 Campaign group Save British Farming (SBF) has written to the NFU urging it to do more to prepare farmers for the dual threats of a no-deal Brexit and cheap food trade deals.

In a letter sent to NFU president Minette Batters, farmer’s wife Liz Webster said she and her husband were “extremely disappointed” that the union had decided not to support the group’s rally against the Agriculture Bill in London last week.

Frustrated farmers broke off from their harvest and haymaking schedule to drive tractors to the capital for a socially distanced drive-slow demonstration around Parliament Square.

But the NFU said it decided against supporting the protest primarily because of ongoing concerns over the transmission of coronavirus.

The SBF demo attracted around 50 protesters, including representatives of the Landworkers’ Alliance, environmentalists, animal rights activists, seed merchants and farmers.

They wanted to send a direct message to prime minister Boris Johnson about fears his government will pass an Agriculture Bill that will give no protection for the UK’s high animal welfare and environmental standards – and will result in family farms being forced out of business amid a flood of cheap food imports.

If the government had been serious about protecting our industry, it would have whipped MPs to adopt the Neil Parish amendment to the bill, that any food imports allowed into the UK must be to at least the same high standards of British farming, SBF said. 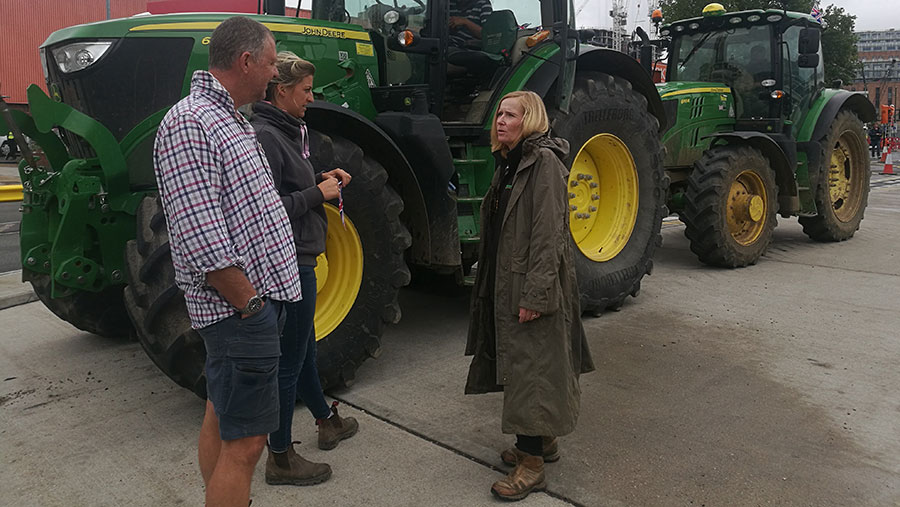 Liz Webster talks to farmers at the SBF protest.

In her letter, Mrs Webster tells Mrs Batters that many farmers are “extremely sceptical” about the government’s plans to set up a trade and agriculture commission whose recommendations will be “advisory only”.

“The chairman [Tim Smith] has already made it clear he is on the side of chlorinated chicken,” writes Mrs Webster.

It was also naïve to sit back and allow the government to use this commission “as a pacifier to anxious farmers”, she added.

“Had this government been serious about protecting our industry, they would ensure our domestic market and high standards are protected in law,” writes Mrs Webster.

The other “elephant in the room” is the looming prospect of the UK crashing out of the EU with a no-deal, which she said was now “the most likely outcome at the end of the year”.

“The trade and agriculture commission does not in any way have control over the tsunami of harm that would open up should we be forced to trade on WTO [rules],” writes Mrs Webster. “Livestock farmers have absolutely no idea if there is going to be any market for their stock next year.”

With only five months left until the end of the transition period and Mr Johnson having passed up the opportunity to extend Brexit negotiations with the EU, Mrs Webster asks Mrs Batters: “What is the NFU going to do to help farmers prepare for this Armageddon?”

SBF has committed to rolling out a national poster campaign to raise public awareness of these concerns with plans for further co-ordinated regional events.

The group urged the NFU to “combine our efforts and work collaboratively”, saying “we are meant to be on the same side”.

Speaking to Farmers Weekly, Mrs Webster said the UK government was deluded with its plans to transform the countryside with its post-Brexit Environmental Land Management (ELM) scheme.

“We will have a lovely Jurassic Park in Britain, offshoring our food production to support countries with cruel animal welfare and regressive food standards,” she said.

“It will have a detrimental impact on public health, farmers’ livelihoods and the environment through the clearance of rainforests. God knows what will happen to the fields where our livestock currently roam.”

An NFU spokesman said: “The letter was sent in private correspondence to our president, Minette Batters. We do not comment on such private letters.”

A UK government spokesman said: “This government has been clear it will not sign a trade deal that will compromise our high environmental protection, animal welfare and food safety standards. We are a world leader in these areas and that will not change.

“Chlorinated chicken and hormone-treated beef are not permitted for import into the UK. This will be retained through the EU Withdrawal Act and enshrined in UK law at the end of the transition agreement.”