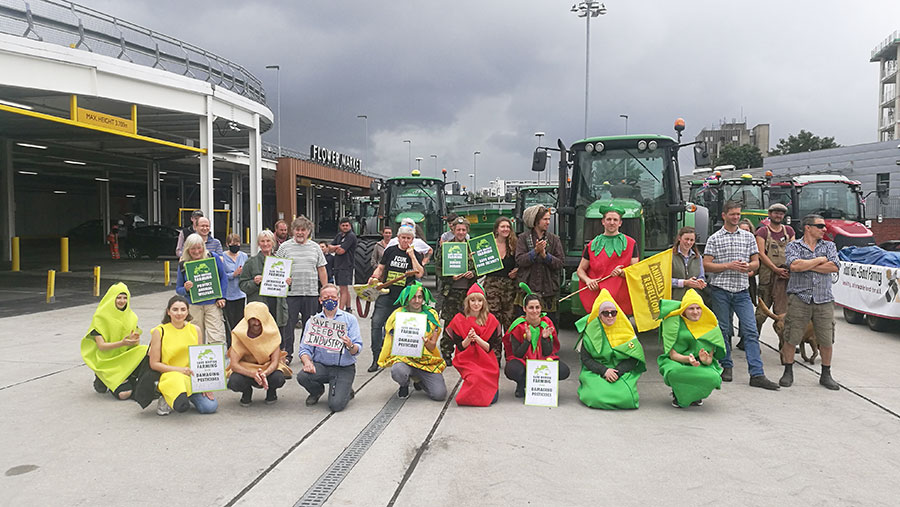 Frustrated farmers travelled from as far as Yorkshire and Somerset to take part in a demonstration in London over threats to food standards.

A convoy of about 20 tractors, Land Rovers and 4x4s snaked its way through the capital’s streets for a noisy and colourful demonstration, which was well received by the public.

The go-slow protest on Wednesday (8 July) started at Covent Garden Market and ended some 90 minutes later with two laps of Parliament Square, in the shadows of Westminster.

The intention was to send a strong message to prime minister Boris Johnson and his government that British farmers fear their businesses will be destroyed if the government signs a free-trade agreement with the US, flooding the UK market with cheap, low-quality food.

The Agriculture Bill is currently going through parliament, but it does not contain any legal protections that food imports must meet our own high environmental, animal welfare, and food safety standards.

“If the government has firm intentions to stop lower-standard imports and not undercut British farmers, then it needs to be enshrined in law,” said Jyoti Fernandes, chairwoman of the Landworkers’ Alliance, an organisation representing smaller farming businesses.

Ms Fernandes, who travelled from her 20ha farm in Dorset to take part in the protest, added: “The focus has been around the US and chlorinated chicken. But we are not just concerned about the US trade deal – we are worried about the government agreeing a deal with any country that has lower food standards than ours.”

To highlight this point, protesters dressed as fruit and vegetables, to raise the possibility of food imports being allowed into the UK produced with pesticides banned for use here.

Members of vegan animal welfare and environmental campaign groups Animal Rebellion and the Animal Save Movement joined farmers for the protest, in a rare show of solidarity between the two groups.

Rutland farmer Andrew Brown, who is supporting the campaign, told Farmers Weekly: “If the UK government does not legislate to stop cheap food imports flooding the UK, the Europeans will just tell us: ‘We don’t want your stuff as it’s lower than our standards’.

“The government will be desperate to do a deal with anybody – they’re already desperate.

“They will chuck farming under the bus just to do a deal. It’s the emperor’s new clothes. I just don’t understand why farmers can’t see through it.”

Liz Webster, campaign organiser and a farmer’s wife, from the Cotswolds, said: “It’s vital we all act to keep our food safe and our countryside beautiful.

“Government has to protect our food and animal welfare standards in law to save our world-beating industry.”

Organisers plan to step up their activity this summer, including offering farmers banners to place in their fields, regional protests in cities and a letter writing campaign where supporters can write to their MPs, local Conservative associations and supermarkets, requesting that the British EU food standards are maintained.

The government says it remains “firmly committed to upholding our high environmental, food safety and animal welfare standards outside the EU”.