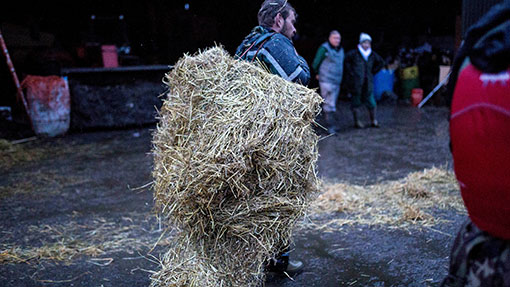 The farmer who became the face of the Somerset flood crisis is still waiting for government money to help his business recover.

Beef producer James Winslade applied for the maximum £5,000 grant in April in phase one of Defra’s Farming Recovery Fund.

But more than eight months after the devastating floods ravaged West Yeo Farm, he hasn’t received a penny.

Mr Winslade, whose 340ha farm at Moorland, near Bridgwater, was almost completely flooded, said Defra reviewed his application and asked him to provide receipts for the grass seed, which he submitted on 4 August.

“I applied for £5,000 worth of government grants to cover £11,000 worth of grass seed I bought to reseed fields,” said Mr Winslade.

“I have been told I’m going to get the money. I submitted the receipts in early August. I had hoped to receive the grant by now, but I haven’t had a thing.”

Last week, Farmers Weekly revealed that Defra had paid less than £200,000 of a possible £10m funding pot for flood-hit farmers .

“I’m still living in a mobile home. Everything is still upside down. It’s another hassle I don’t need.”
James Winslade

This is despite prime minister David Cameron’s pledge in the immediate aftermath of the floods that money would be no object to help farmers recover from the devastation .

Mr Winslade said he was grateful to the government. But he described the application process as a “pain in the backside”.

“I photocopied all the statements for the grass seed and bank statements, but the Defra inspector said she wanted to see the originals,” he said.

“She spent the whole day walking my fields. Then she spent the next day ringing Mole Valley Farmers to check I had paid the full amount.

“Defra kept asking for more and more information. In the end, I employed a land agent to do it. By the time you have added his fees and how much it costs to pay a civil servant to check everything, I’d imagine it’s more than what we will actually get in grant money.”

Mr Winslade said Defra should have used its common sense and paid the worst-affected farmers such as him up front.

“I’ve got enough to deal with without having to deal with Defra,” he said. “I’m still living in a mobile home. Everything is still upside down. It’s another hassle I don’t need.”

Mr Winslade said he submitted the maximum claim of £30,000 for phase two of the recovery fund in June.

He said Defra has approved his application, but told him he must complete all the work first and submit the receipts before January – or he won’t be paid.

“I would have preferred to do half of the work this year and the rest of it next year, because I have to finance everything in advance – and there is still so much to do.”

Meanwhile, Mr Winslade is continuing to pay the bank interest on a £100,000 overdraft he took out in the aftermath of the floods.

NFU director of policy Andrew Clark said: “Cashflow is a major issue for farms affected, and farmers such as James need to know Defra is supporting them.

“I really hope Defra learns the lessons from the 2014 floods. With more extreme weather expected in future, the NFU is really keen to sit down with Defra to put in place a much more robust approach that gets the help to farmers that need it much faster.”

Christopher Price, CLA director of policy and advice, added: “The government has made the money available, so it must streamline the process, not hamper those flood victims from getting their lives and businesses back on track.”

A Defra spokeswoman said: “We are spending more than ever before on flood prevention and doing all we can to help people overcome the devastating effects of last year’s floods.

“We made £10m available to help farmers get their land back into production after flooding. Under EU rules, payments from the Rural Development Programme budget must be paid to farmers once the work has been carried out and all necessary evidence submitted.”