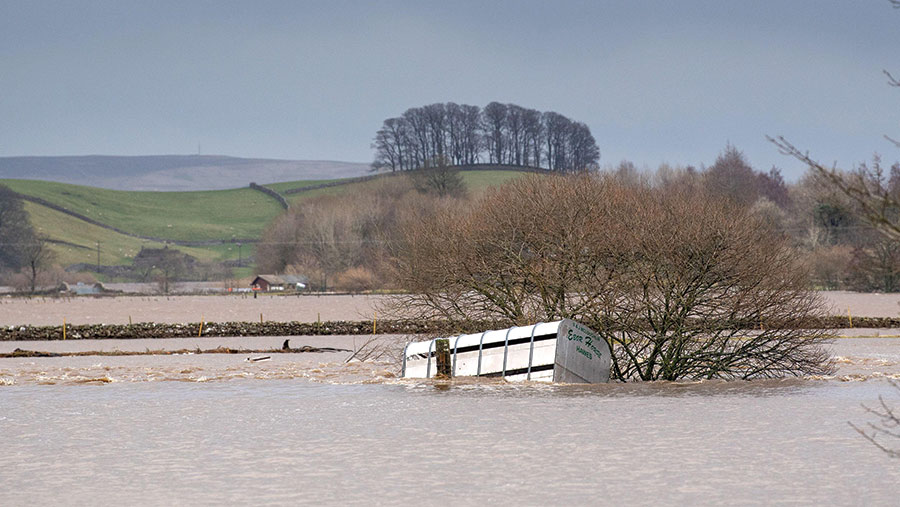 Farmers are bracing themselves for more extreme weather only days after Storm Ciara hammered the country.

Storm Dennis is expected to bring strong winds and heavy rain to parts of the UK on Saturday 15 February, with gusts over 50mph and risk of further flooding.

The storm is not expected to be as extreme as Storm Ciara, which wreaked havoc on farms with damage to buildings and flooding of fields.

Farmers reported livestock trailers being swept away by floodwaters. Yorkshire Dales farmer Amanda Owen, known as the Yorkshire Shepherdess, uploaded a video on her Twitter page of a trailer floating down a flooded field in Swaledale, North Yorkshire.

Rural insurer NFU Mutual said judging by reports of damage, it is the worst UK-wide storm for several years. Fallen trees blocked roads and there was serious flooding in the North West.

Paul Branch, head of claims at NFU Mutual, said: “We are aware of approximately 1,800 claims so far, and this number is still rising. We expect the numbers to continue to increase as Storm Ciara rumbles on and more customers submit their claims for damage.

“As we’re only three days into the storm, it’s very difficult to provide an estimated cost at this early stage and we would expect the full picture to become apparent after around 10 days. However, from the very early projections we expect costs to exceed £5m, potentially by a significant amount.”

There are further warnings from the Met Office of wet and windy weather this weekend, when Storm Dennis is expected to sweep across the UK.

As Farmers Weekly went to press on Wednesday 12 February, the Environment Agency (EA) said there were 30 flood warnings and 106 flood alerts in place across the country.

The EA urged farmers to sign up to free flood warnings and keep up to date with the latest safety advice by calling Floodline on 0345 988 1188.

Caroline Douglass, flood duty manager at the EA, said: “We continue to check defences after the severe weather and operate them as needed, to help keep people and properties safe.

“River and surface water flooding is possible on Saturday into Sunday due to Storm Dennis, and we are advising people to check their flood risk and to stay safe on the coast or when walking or driving near swollen rivers.”

Met Office chief meteorologist Steve Ramsdale said: “Another spell of very wet and windy weather is expected for Saturday. Our confidence in the forecast means we have been able to issue severe weather warnings well in advance, giving people time to prepare for potential impacts of the storm.”

NFU Mutual added: “Just as with Storm Ciara, our regional claims teams, agency network and suppliers are prepared and ready, to ensure we’re able to meet the needs of our members should they be affected by Storm Dennis this weekend.”