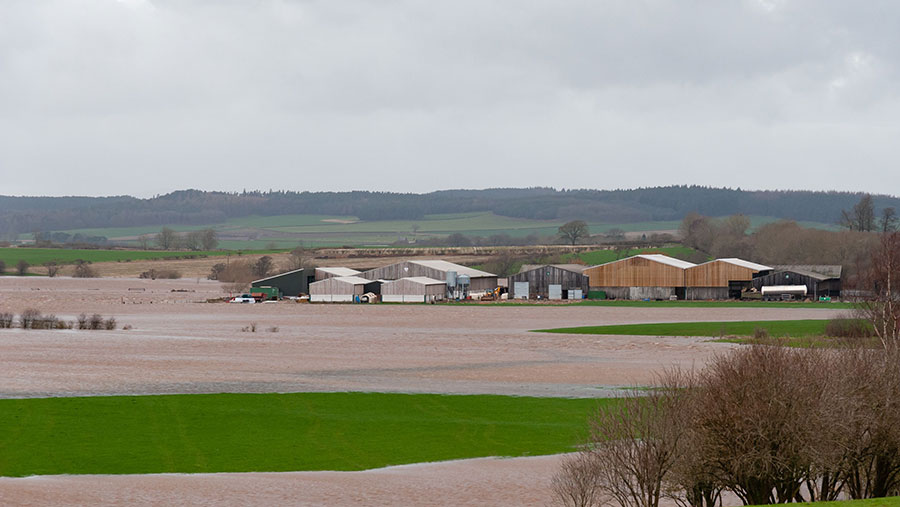 Farmers have been left counting the costs after hurricane-force winds and flooding hammered the country.

Storm Ciara lashed the country on Sunday (9 February), with winds of up to 93mph recorded in the UK.

Rural insurer NFU Mutual said judging by reports of damage, it is the worst UK-wide storm for the past three years.

Farmers have been reporting widespread damage to buildings and flooding of fields, and fallen trees have made many rural roads impassable.

It comes after the washout autumn wreaked havoc on farms and left huge swathes of farmland too wet to drill crops.

The Met Office warned that gusts of up to 70mph would hit the country on Monday (10 February), and northern England and Scotland were braced for snow and icy conditions.

Over the weekend, farmers took to social media to highlight how the storms had badly disrupted their businesses.

Yorkshire Dales farmer Amanda Owen, known as the Yorkshire Shepherdess, uploaded a video on her Twitter page (@AmandaOwen8) of a cattle trailer being swept away in Swaledale, North Yorkshire.

The energy & power of this storm are unreal. The gusts of wind are exceptional and water is pouring.
Can’t believe that this just happened. #Storm #StormCiara pic.twitter.com/4rWPv9JfMC

She described the flooding as of “Biblical proportions”.

“The energy and power of this storm are unreal,” she tweeted. “The gusts of wind are exceptional and water is pouring. Can’t believe that this just happened.”

Luckily, Mrs Owen had moved all her animals down from the moortops to safety before the storm arrived.

In Cumbria, five firefighters used lifejackets and a wading pole to rescue a farmer and his dog who had been cut off from dry land and were left stranded as a result of rising water near Lazonby.

NFU vice-president Stuart Roberts urged people to “spare a thought” for farmers who are out looking after their animals in all conditions – regardless of the weather.

As people wake up to #StormCaira please spare a thought for those who need to be out in the storm for whatever reason. Our animals need looking after regardless of the weather conditions.

Rebecca Davidson, NFU Mutual rural affairs specialist, said: “Dozens of roads have been blocked by fallen trees in all parts of the UK – but so far, the most worrying reports are about serious flooding in the North West, where heavy rain has fallen and rivers have already burst their banks.

“Farmers on high ground in the Lake District, Lancashire and North Yorkshire have had their farms flooded, putting livestock and property at risk. One farmer has even reported seeing their livestock trailer swept away from their farmyard by the floodwaters.”

On Sunday evening, the Environment Agency (EA) said more than 190 flood warnings and about 170 flood alerts were in place across the country.

Chris Wilding, EA flood duty manager, said: “Some significant river flooding is possible across parts of the north of England today due to heavy, persistent rain and severe gale-force winds associated with Storm Ciara. We urge people in at-risk areas to remain vigilant.”

Looking ahead, Met Office chief meteorologist Frank Saunders said: “It will remain unsettled and very windy across the UK and it’ll turn colder, with wintry showers and ice an additional hazard, as we head into the new week.

“A wind and snow warning is in force for parts of Northern Ireland and Scotland on Monday, as well as a further yellow wind warning in the south-west of England.”

Has your farm suffered damage in Storm Ciara? Email your stories and photos of storm damage and flooding to philip.case@proagrica.com