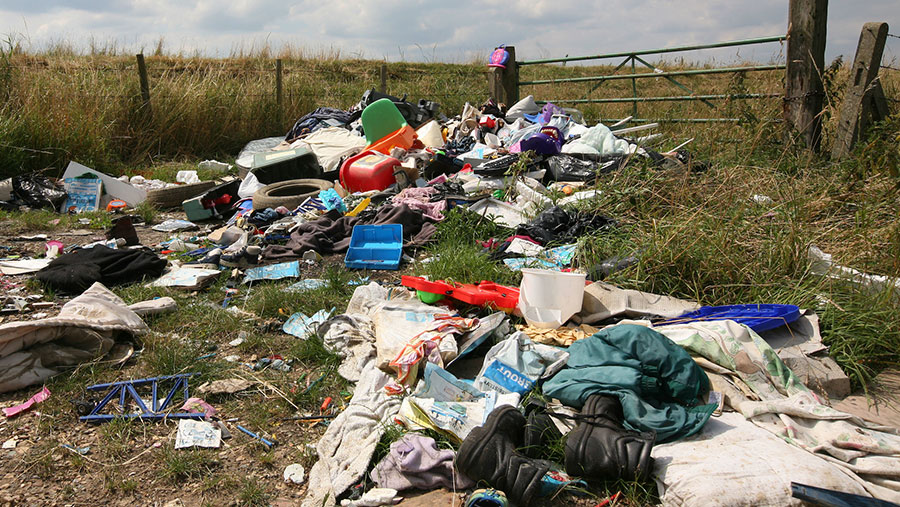 Farmers and landowners are being urged to tell Neil Parish MP their experiences of fly-tipping in the countryside ahead of a parliamentary forum on the issue.

Mr Parish, chairman of the influential Environment Food and Rural Affairs Committee, is leading a debate about the impact of fly-tipping in rural areas – and he wants to hear your experiences.

The two-hour Westminster Hall debate will take place on Tuesday (17 April). It will be broadcast live on Parliament TV.

Writing on his Facebook page, Mr Parish, Conservative MP for Tiverton and Honiton, said: “Fly-tipping is not a victimless crime.

“There has been a surge in fly-tipping recently. If you have been affected by fly-tipping please do let me know. We need a solution which will penalise those who commit the crime, not those who clean it up.”

The CLA, NFU and Countryside Alliance have long campaigned on the problem of fly-tipping in the countryside.

But faming organisations believe these figures reveal only half the story because, as the law stands, landowners are liable for the costs of clearing fly-tipped waste from private land – and therefore many choose not to report incidents. If they don’t act, they risk prosecution for illegal storage of waste.

Last April, Farmers Weekly launched Stop the Blot, a campaign to raise awareness of the dreadful impact of fly-tipping on farms and in the countryside.

Our campaign, supported by CLA Insurance, is calling for tougher punishments to be meted out to fly-tippers and changes in legislation to ensure that innocent landowners are not unfairly penalised.

The organisation has published a five-point plan which urges the government to take steps to tackle fly-tipping in the countryside (see ‘Tackling the blight of fly-tipping – the CLA’s five point plan’, below).

The CLA says its members reported a 200% increase in fly-tipping on private land in just three years. The organisation is supporting the government proposal to introduce fixed penalty notices for householders who do not dispose of their waste through proper legal channels.

CLA legal adviser Andrew Gillett said: “It is a complete injustice that private landowners who experience fly-tipping are then subject to becoming a criminal themselves if they do not clear up and pay for the mess to be disposed of. If they must clear it up themselves they should not be charged for disposing of it legally.”

The Countryside Alliance believes more needs to be done to bring the perpetrators to justice, including the seizure of vehicles used for fly-tipping. The alliance also wants more support for landowners, including anti-fly-tip measures and the use of compensation orders.