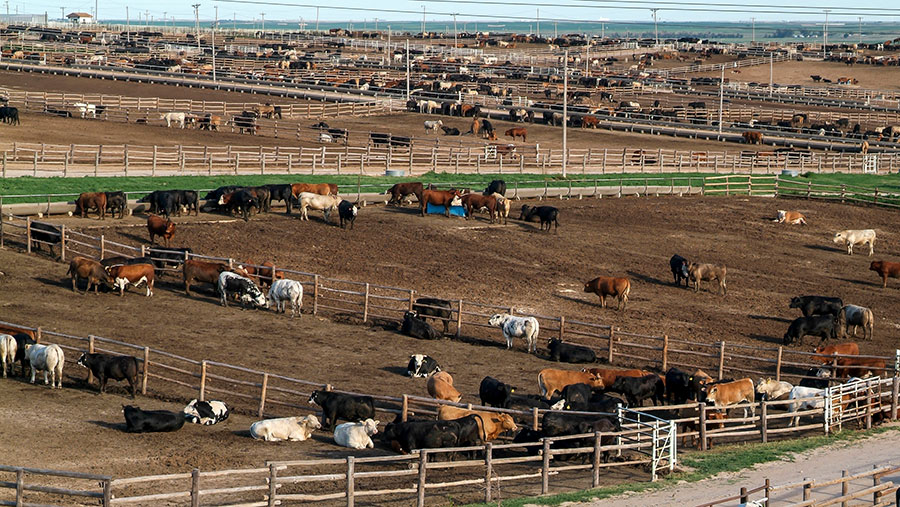 Disturbing footage has emerged on social media of thousands of cattle lying dead in feedlots in Kansas, US.

The Kansas Department of Health and Environment said at least 2,000 cattle died after the area experienced temperatures above 37C (100F) and high humidity.

But Iowa Corn reported that an estimated 10,000 head of cattle had died of heat stress.

See also: Visit the Know How centre for advice on farming in weather extremes

Farmers have expressed their shock and upset that so many cattle had died due to the extreme heat – and some have questioned whether other causes are to blame.

10,000 dead cattle in Kansas and they’re blaming it on the weather

Scarlett Hagins, a spokeswoman for the Kansas Livestock Association, said the animals died due to heat stress.

In a video posted on the group’s Facebook page, she said: “We cannot confirm the number [of cattle] lost and at this point any number reported would be speculative.

“This was a very unfortunate event that was the result of the regions seeing a significant change in weather in a short amount of time.

“Temperatures rose significantly. Humidity was high. There was really little to no wind and, if cattle cannot cool down over the night time hours because temperatures remain high, they really can’t compensate for the this kind of weather, which led to heat stress in cattle in that region.”

Ms Hagins added that the extreme temperatures were “not normal” and the region is “ideal for raising fed cattle”.

She continued: “This was really an unusual and unfortunate event. Cattle feeders continually work to mitigate any and all weather events, whether it is excessive heat, cold, snow or wind.

“It is always their goal to make sure their cattle are healthy and well taken care of so that they can provide a safe, wholesome product – to not only their families to enjoy, but also for consumers.”

High temperatures in the mid-30Cs are expected to continue in the Kansas region for at least the next week, peaking at 37C on Tuesday 21 June, according to the Weather Channel. Average winds will be between 8-10mph.

The US Department of Agriculture said it was in contact with cattle ranchers in the area, and was on standby to provide help and information.