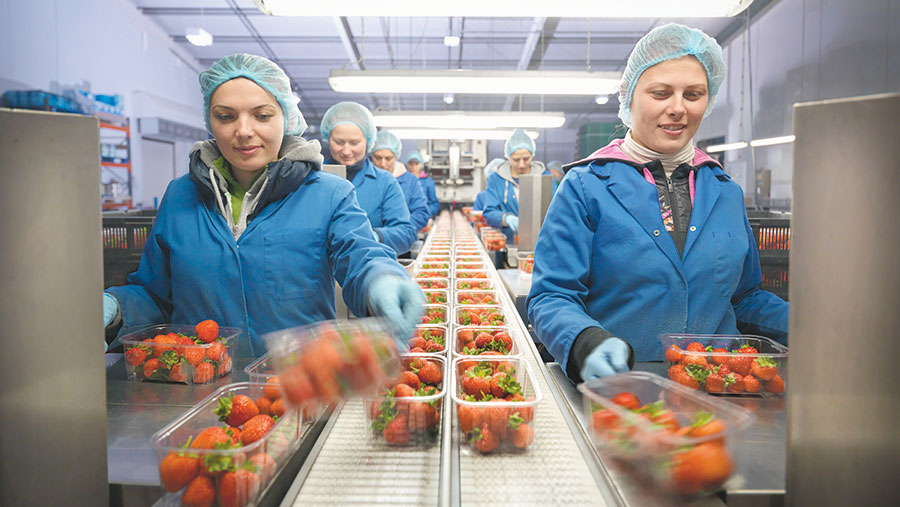 Farmers face being driven out of business without access to workers from overseas after the UK leaves the EU, a survey suggests.

More than one in three businesses in the “farm to fork” supply chain fear they will become unviable unless they can employ European workers post Brexit.

Co-ordinated by the Food & Drink Federation (FDF), the survey of 1,500 businesses included farmers, growers and food and drink processors.

An estimated two million EU nationals are working in the UK. Some 20% of these workers are employed across the UK’s £110bn food and drink sector – including in agriculture and horticulture.

NFU members were among those quizzed by researchers.

She said: “An abrupt reduction in EU workers would cause massive disruption to the entire food supply chain – a solution for the whole industry is needed to ensure the sector has access to the skills and labour it needs.”

Almost half (47%) of businesses surveyed said EU nationals were considering leaving the UK due to uncertainty about their future.

Some 31% of respondents said they had already seen EU nationals leave since last year’s UK referendum on EU membership.

And 17% of businesses said they would consider relocating overseas if they had no access to EU workers.

The report calls for legislation to secure the rights of European nationals in the UK. It also wants an “attractive and effective” migration system that recognises the strategic importance of the food supply chain.

With record high levels of employment in key geographical areas, there is often not enough local UK labour to fill roles, says the report.

FDF director general Ian Wright said: “It is only a matter of time before the uncertainty reported by businesses results in an irreversible exit of EU workers from these shores.”

Mr Wright added: “Without our dedicated and valued workforce we would be unable to feed the nation.

“This is why it is imperative that we receive assurances from government about their future, and that of our wider workforce,” he said.