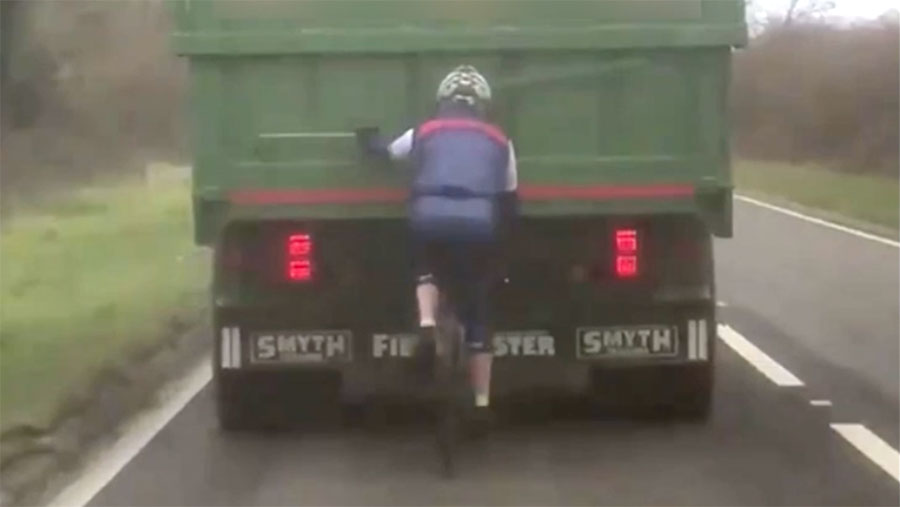 A cyclist has been blasted for hitching a ride on the back of a silage trailer travelling on a rural road in Wales.

Dairy farmer Steve Evans said he “couldn’t believe his eyes” when he realised the cyclist was holding on to the back of the Field Master trailer on the A40 near Haverfordwest, Pembrokeshire.

Mr Evans and a friend were on the way back from market and the farmer filmed the clip from the passenger seat on Tuesday afternoon (16 March).

“It was unreal,” Mr Evans told Farmers Weekly. “On downhill parts of the road he was freewheeling literally inches from the back of the trailer. The lad in the tractor was completely oblivious to him, he had absolutely no clue.”

Mr Evans shared the footage on his Twitter account and tagged Dyfed-Powys Police. Within minutes they contacted the farmer and arranged for squad cars to meet him in a lay-by near Haverfordwest Golf Glub.

“The copper got out the van, saw the video and was like: ‘That’s unreal’. The police then went to look for the cyclist. They wanted to see the video,” Mr Evans said.

He added: “There are roadworks and traffic lights on the stretch of road the tractor was travelling on.

“The tractor might have had to jam on [the brakes] and that bike would’ve been underneath, or he’d certainly have smashed his head on the tailgate of the trailer.”

Mr Evans has since spoken to the tractor driver, who was shocked to see the footage.

“Things are drying up and there are going to be more of us on the land, we’re going to be on the roads more, and you see things like that, it is unbelievable.”

A Dyfed-Powys Police spokesman said: “We received a report of a cyclist holding on to a trailer on the A40 in the Canaston Bridge area, heading towards Haverfordwest.

“Officers attended, however, they were unable to trace the cyclist. If anyone has information regarding this incident, or knows who the cyclist is, please contact Dyfed-Powys Police on 101, quoting reference 170 of 16 March.”

The force reminded all road users to use highways responsibly and not to act in a manner that could result in harm to themselves or others.