Farmers and landowners in Gloucestershire’s Upper Thames area are working together to manage the land to provide catchment-scale solutions to prevent future floods while making businesses resilient.

When storms Eva and Desmond hit rural northern England in the winter of 2015, the government’s record on flood prevention came under fire.

The storms caused severe flooding on hundreds of farms and wreaked havoc among farming businesses and rural communities. Indeed, many are still recovering from their losses today.

As part of its flood prevention strategy, the government has invested £7.2m in Natural England’s Countryside Stewardship facilitation fund.

It aims to encourage farmers and land managers to use natural flood management techniques to better protect communities from flooding, practices that also protect soil and water to support businesses.

Now with three years of funding, groups of farmers and landowners, led by facilitators, are working collectively on farming practices over adjacent holdings within their catchments to slow the flow of water and improve flood resilience.

One group, the Farmers Guardians of the Upper Thames, has attracted 43 members covering 16,000ha to deliver Countryside Stewardship priorities. 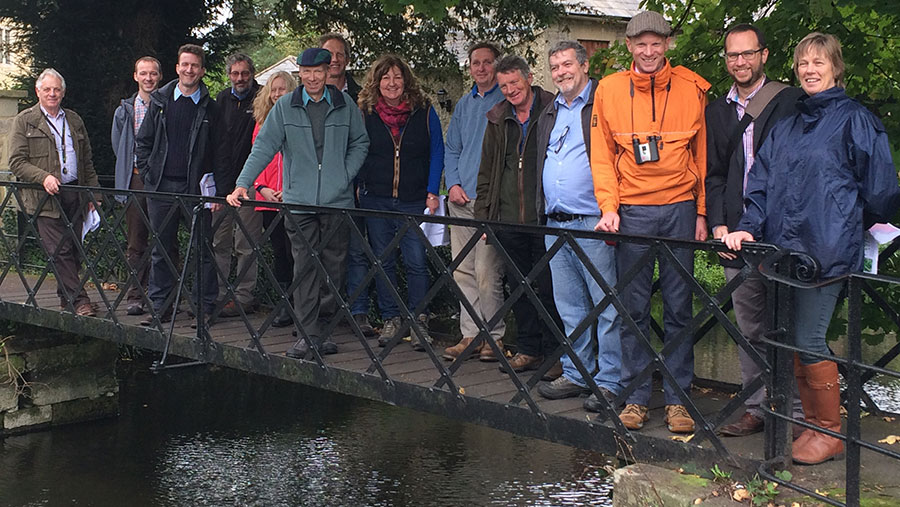 Guy Thompson, chief operating officer at Natural England, hopes that highlighting the success of this group will encourage more farmer groups who may be eligible to apply for funding during this application window, which closes on 14 November.

“We have to put farmers at the forefront of these partnerships. By working together, farmers can share the learning and also grow in confidence in trying to test new approaches on their own holdings,” he says.

The group’s principal goal is to form a collaborative group of farmers and land managers to deliver Countryside Stewardship priorities for the Upper Thames and Clay Vales.

Fields and hedgerows in the Upper Thames catchment area near Cirencester

This opportunity is open to all farmers and land managers in the Upper Thames catchment, and group members say it is helping them to maximise opportunities under Countryside Stewardship.

The group is chaired by local farmer Richard Rummings, the NFU representative for the Upper Thames Catchment Partnership, to link the successes of the farmers to both complementary organisations for information and support.

This is achieved with the support of Jenny Phelps, a Farming and Wildlife Advisory Group (FWAG) South West senior conservation adviser, who acts as facilitator to bring farmers, land managers, agencies and communities together to share learning.

The facilitation fund group is working with agencies, including Thames Water, the Environment Agency, flooding authorities, Rural Community Council, the wildlife trusts, volunteers and others to improve natural flood management around Cirencester.

Studying historic maps, they have found that two of the three tributaries that used to flow through Cirencester have become blocked up.

This means water that flows downstream from the River Churn, 12 miles into Cirencester, could back up and flood the town.

Flooding can cause problems with ingress of surface and groundwater into the foul sewerage system, potentially impacting on future urban development.

The group is working with the authorities and farmers to look at the landscape and ways to stop the water flowing down into Cirencester at such a rate that it causes flooding.

“It makes perfect sense to restore the habitats, attenuate the water flow and improve soil health, complementing funding for hard infrastructure that doesn’t have all those benefits.” 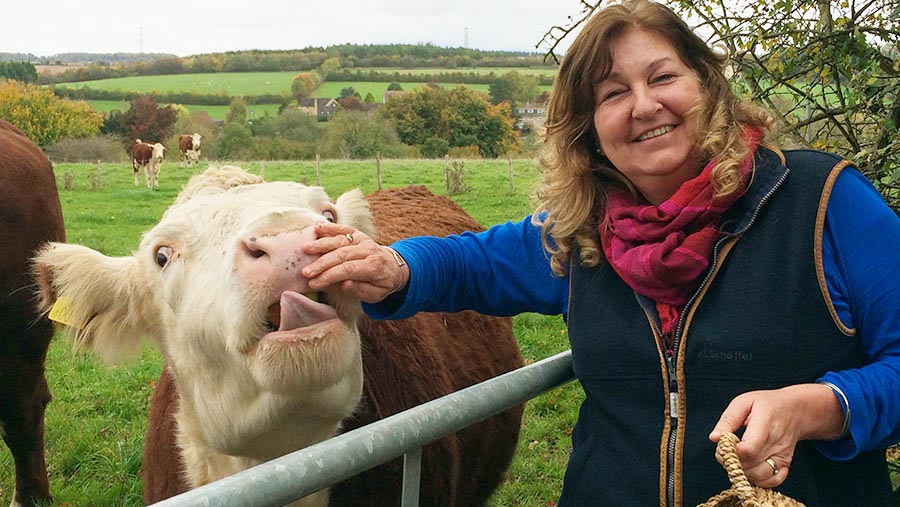 The group places strong emphasis on tackling soil erosion with buffer zones to prevent run-off of pesticides and sediments.

In general, 4-6m buffers are placed next to ordinary watercourses (those not next to a main river) and wide field margins in the most sensitive spots – 12-24m buffers next to main rivers.

Ms Phelps says: “We think about how we can help solve their problems for them, such as blackgrass and slugs. It changes their thinking about the scheme being a wildlife scheme to something that is actually there to underpin their businesses.”

Farmers and landowners are working to adopt practices to help the recovery of wildlife and pollinators.

They are encouraged to put together a package of options that will produce food to help farmland birds and pollinators survive throughout the year.

A big range of options under Countryside Stewardship are being put in across many farms, including flower-rich margins and plots (AB8) around fields, pollen and nectar mixes (AB1), winter bird mixes (AB9) and supplementary winter feeding for farmland birds (AB12).

Gloucestershire grower Toby Baxter says ensuring a constant cover on the soil is a key focus at his mixed arable, sheep and beef Cotswold-based farming business.

He plants four-year herbal leys in the arable rotation as part of his HLS and Mid Tier Countryside Stewardship agreements.

Introducing herbal leys into his zero-till arable rotation has been an invaluable tool for fertility building and also blackgrass control and it has significantly improved farm biodiversity.

Next year, he intends to plant 120ha of herbal leys under a new Mid Tier agreement at a new farm holding, following other success on existing farms. 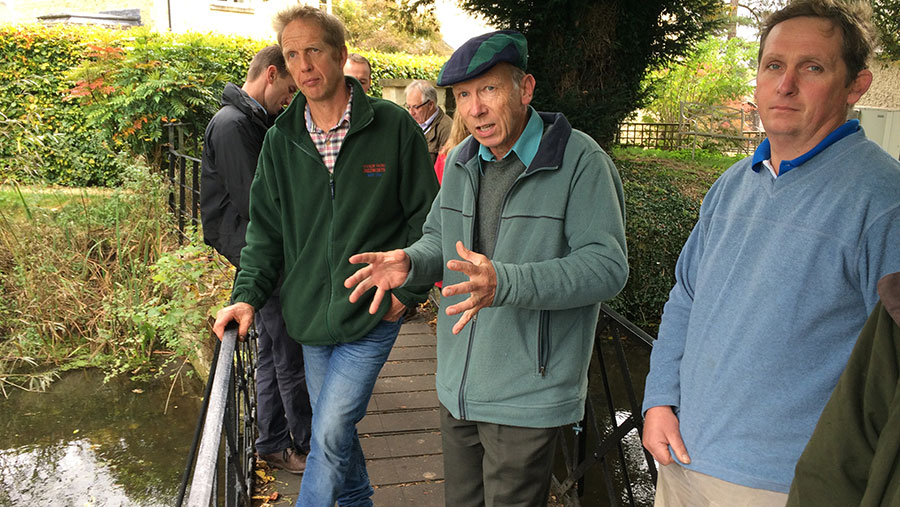 Rob Richmond (left) and Toby Baxter (right) with other farmers

He says the crops planted after herbal leys perform a lot better than those that follow arable crops. This year on adjoining fields, for example, his wheat yielded 11t/ha following herbal grass leys, compared with 9t/ha following linseed.

Mr Baxter says the herb-rich leys have helped develop soil structure that has reduced his blackgrass burden and lowered his N fertiliser costs.

Natural England’s Countryside Stewardship Facilitation Fund was launched in 2015 with the aim to help farmers, foresters and other land managers protect and enhance our natural environment.

This collaboration is helping farmers to deliver bigger and better environmental benefits through restoring precious wildlife habitats, planting trees and protecting and improving the natural landscape.

Farmers signed up to this scheme can achieve far more working in partnership than they could in isolation.

By working together on a landscape scale, farmers in a group can deliver bigger and better environmental improvements.

Farm manager and Nuffield scholar Rob Richmond has been growing herbal leys and has established rotational grazing practices at Manor Farm for the past decade.

This also contributes towards drought resistance on Cotswold brash, which is renowned for being dry, and better animal performance. 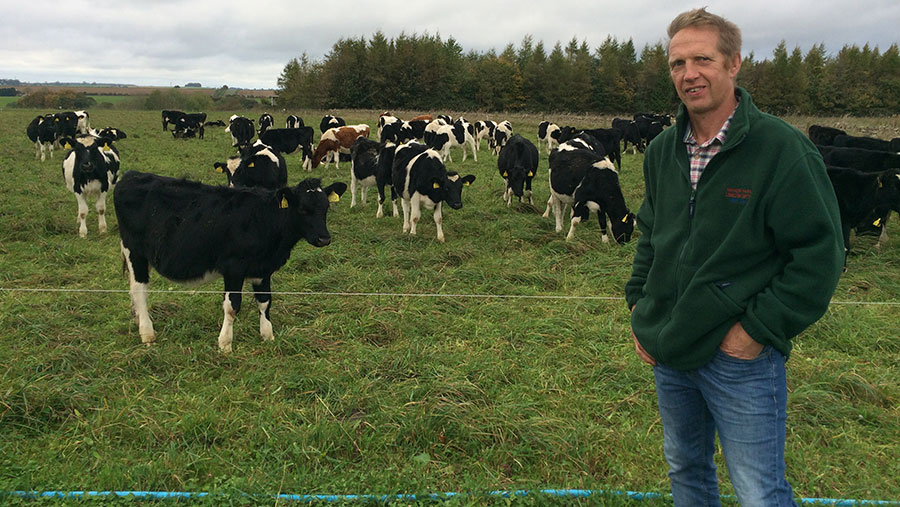 Mr Richmond completed a Nuffield scholarship in 2011 looking at the benefits to agriculture and the environment of rebuilding soil carbon and organic matter. He says when he was previously farming conventionally, nitrogen fertiliser inputs deflated his soils and they lost structure.

The water would “hit” the top of his fields, causing runoff of soil and nutrients, silting rivers, damaging water quality and causing flood issues downstream. Rebuilding the soil carbon has returned the crumb structure to his soils, so that rainfall is absorbed.

The growing of herbal leys, which are a mix of highly bred grasses, including clover, trefoil, sainfoin and herbs, has enabled him to drive this soil biology, building organic matter and creating multiple benefits for the whole food web, including bird life, small mammals, bees  and other pollinators.

“This long grass has huge potential, a lot more benefits than is being talked about in livestock reports. We don’t have wildlife bits bolted on to the edge of fields,” Mr Richmond notes.

Furthermore, he says the system is very productive. Stocking rates have been increased year on year as the soils have improved.

There are currently 61 facilitation fund groups in operation and Natural England is providing funding for another 20-30 groups to form as a result of the 2017 application round.

The 2017 scheme, which is a competitive scheme, has a funding pot of £1.7m. It is open until 14 November 2017 for applications from farming groups and organisations that work to bring together land managers to improve their local natural environments.