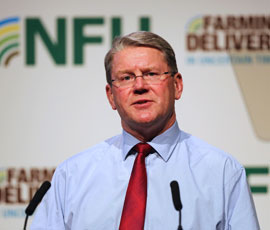 Farm leaders and DEFRA officials are to develop a new agri-environmental scheme that will meet the requirements of CAP reform.

The move comes after DEFRA secretary Owen Paterson secured the right for countries to introduce their own “greening” scheme rather than environmental measures devised by Brussels.

The concession has fuelled fears that DEFRA could go further than any basic EU requirements and ratchet up environmental measures in return for CAP payments.

But Mr Paterson said he had “no intention of gold-plating anything” and pledged that English farmers would not be left at a disadvantage to their European neighbours.

In England, entry-level stewardship will be the building block for the new scheme.

It is understood that farmers will be able to opt out from additional measures under the scheme if they already meet the requirements of three greening options outlined by Brussels.

A DEFRA spokesman said: “What we need to do now is agree with the farming unions what the right scheme would be for the UK.”

NFU president Peter Kendall said he had received reassurances that farmers who met the EU’s three greening options would not have to undertake additional scheme measures.

“Owen Paterson has made a strong commitment to give those opt-outs to English farmers that will be applied to other European member states,” said Mr Kendall.

Earlier, Mr Paterson said he wanted the freedom for member states to devise their own scheme because it would be simpler – not because he wanted to ratchet up environmental rules.

Mr Paterson said he wanted to make sure the new scheme was easy to administer, easy to understand and delivered the outcomes requested by the commission.

Better value for money would be delivered by a greening scheme built on existing agri-environment arrangements rather than an entirely new initiative from Brussels, he said.