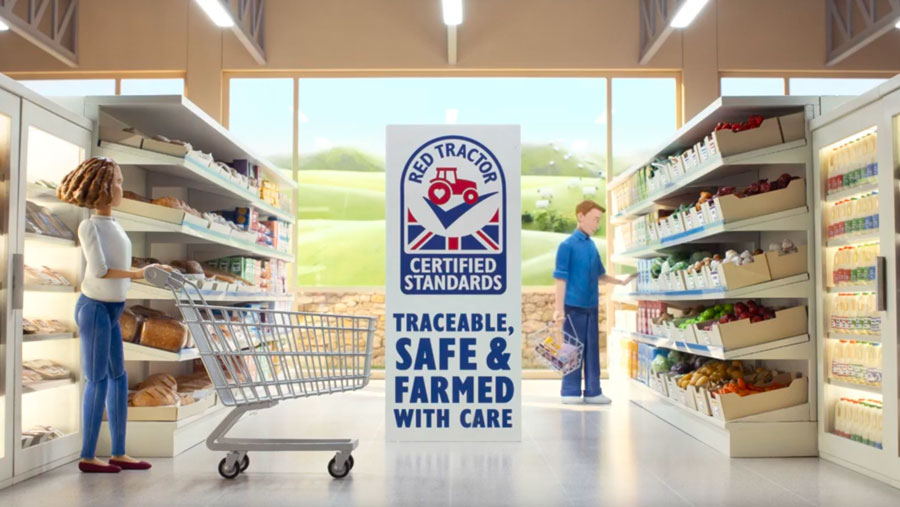 The Red Tractor farm assurance scheme has embarked on its biggest TV marketing campaign yet – aiming to reach 45m viewers.

A 30-second advert will be broadcast on Monday (22 March) during ITV’s The Chase, which is regularly watched by up to 5m people.

It will be followed by adverts during some of the UK’s most-watched shows – including Coronation Street, Emmerdale, Saturday Night Takeaway and Gogglebox.

Red Tractor expects 45m consumers to see the advert during the eight-week campaign which runs until May bank holiday weekend.

This would represent a 20% increase in viewers compared to last year’s campaign.

Some 76% of shoppers – equivalent to 15.5m consumers – are aware of the logo, seeing it as a label they can trust, says Red Tractor.

The new advert follows a mainstream mum shopping for her family and discovering the values that underpin the Red Tractor logo.

She visits farms and supermarkets – seeing how Red Tractor standards are met across a range of sectors including sheep, dairy, and fresh produce.

“We want to keep growing recognition and understanding of the scheme and the logo, and so the campaign will cover as many of Red Tractor’s sectors as possible.”

The animated advert echoes the likes of Fantastic Mr Fox, including handmade scenes, loaves of bread, fruit and vegetables on supermarket shelves.

Some 37m people saw Red Tractor’s TV advert last year, watching it an average of six times. This year, that number is expected to rise to nine times.

Independent research shows that 71% of shoppers say that their purchasing behaviour is positively influenced by seeing the Red Tractor logo.

Some 43% of consumers say they would trade up from a less expensive product to a Red Tractor product if they saw it.