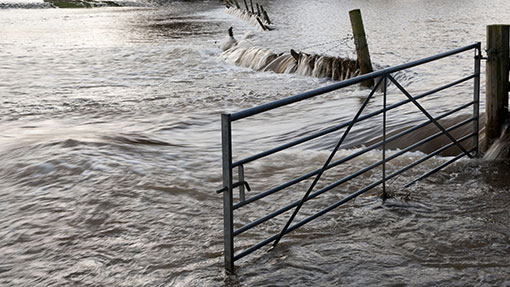 Different amounts of rain had fallen every year for the past three decades and only one year had been “average”, said Dr Knox.

Increasingly uncertain rainfall was a bigger threat to agriculture than the risk posed by a gradual change in climate, he told listeners.

See also: Environment Agency can ‘only save homes or farms from floods’

“What is much more important is the uncertainty, which is much greater than any magnitude of change,” Dr Knox said.

The NFU meeting was held to discuss government plans to reform the water abstraction regime – described by the union as the biggest overhaul of irrigation rules for 50 years.

The elephant in room was the impact on land suitability, said Dr Knox. Rain-fed crops would become much more marginal on land that is drought prone.

Hertfordshire fruit grower Jonathan Lukies told the farmers’ meeting that his business was heavily reliant on access to water.

“If we ran out of water for a day, our crop would be severely damaged,” he said. “Two days, it would be dead – a six figure mistake.”

Whatever way the charging system changed, it was clear that “access to water will not get cheaper,” said NFU water adviser Paul Hammett.

A show of hands suggested most farmers agreed that the abstraction regime should change – but only if it could be achieved “in the right way”.

Farmers use only 0.6% of abstracted water yet held some two-thirds of all abstraction licences issued in England and Wales, said Mr Hammett.