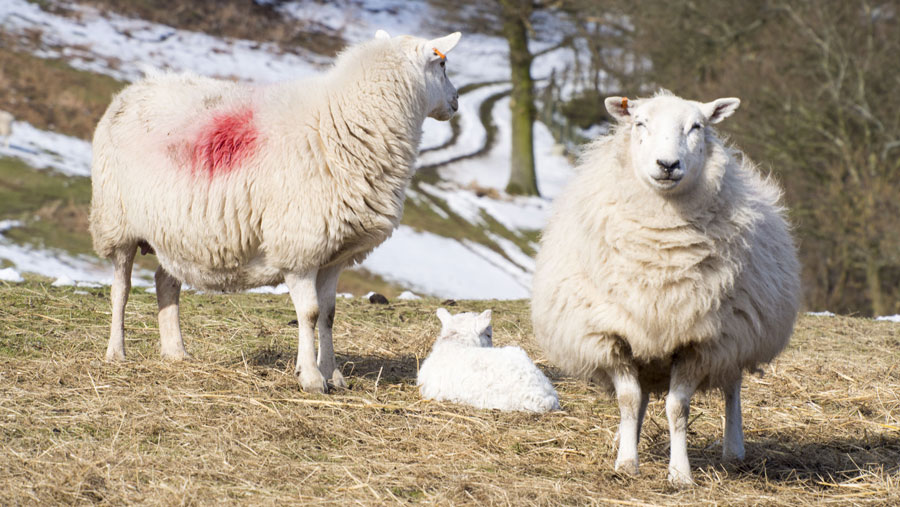 Young lambs in Scotland, North Wales and northern England are at risk of hypothermia next week when biting winds sweeping in from the Russian Arctic will plunge temperatures as low as -2°C.

Temperatures have peaked at 24°C in some regions of the UK this week, but the Met Office is warning that change is on its way on Easter Sunday when Arctic maritime air pushes rain and strong winds across the UK.

This air will reach all areas by the end of the day, but the coldest conditions are expected over higher ground in Scotland, North Wales and northern England, where there will be widespread frosts and wind chill.

Parts of Cumbria will only reach around 5°C on Easter Monday, but will feel more like -2°C, says the Met Office.

There is a chance of snow over higher ground for Sunday and Monday, and there is also a risk wintry showers will reach lower levels in northern areas.

The cold blast is expected to continue through next week, raising concerns around lambing and the risk to lambs from hypothermia.

Newborn lambs have limited energy reserves and have a large surface area-to-bodyweight ratio, which makes them susceptible to heat loss.

It also means they lose heat at a much higher rate when they are wet.

Signs of hypothermia include a hunched posture, hollowed out sides, excessive bleating, lethargy and dehydration.

Glucose remains one of the best available treatments for this, said vet Miranda Timmerman, of Prostock Vets.

Hypothermic lambs need to be dried, warmed until their temperature recovers, and fed by stomach tube.

But if the lamb is more than six hours old it is critical not to warm it without providing glucose or milk first, to prevent brain damage, said Ms Timmerman.

Energy levels will be very low and an injection of glucose is needed as a first course of action.

“When injecting glucose, go an inch to the side of the navel and an inch down,” Ms Timmerman advised. “Use a one-inch needle and go in at a 45-degree angle.”

Once this has been administered, revive with heat and tube with colostrum.

It is not the first time that flocks have faced weather challenges at this time of the year.

A Met Office spokesperson said it was not unusual to see marked changes in weather during the spring months.

In 2013, some parts of the UK experienced temperatures of -10°C and snowdrifts of 15ft at the end of March, resulting in the death of an estimated 25,000 cattle and sheep in a two-week period.

In 2018, there were further casualties when the “Beast from the East” caused blizzards and drifting snow.

Go to our weather page for the forecast, live rain radar map and the weekly video Farming Forecast from Weatherquest, updated every Tuesday.