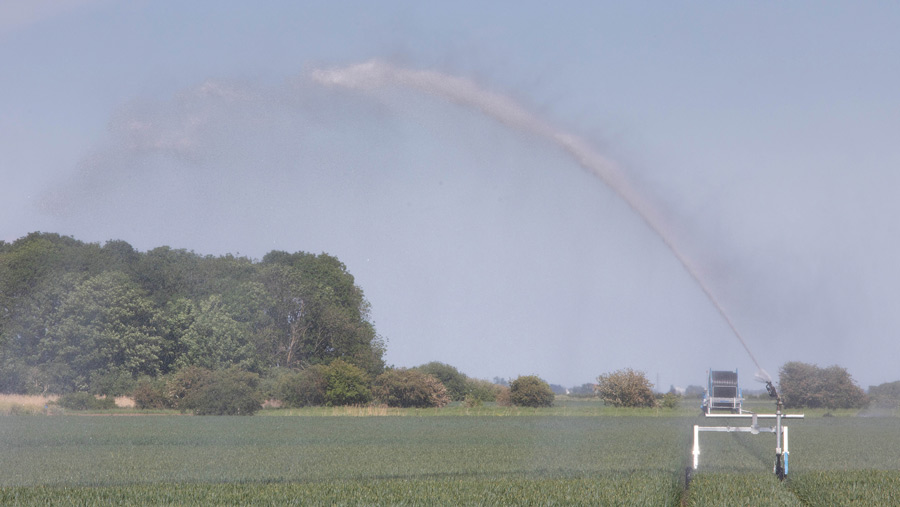 Government representatives and farm leaders are to discuss drought measures as a lack of rain further damages harvest prospects across the country.

Low rainfall over recent weeks is expected to see this May confirmed as the driest on record. Although some showers are forecast over the coming days, the Met Office says warm and dry weather will continue throughout the weekend.

The National Drought Group – which brings together government departments, water companies, environmental groups and farming representatives – is due to assess the situation and discuss any necessary action during the first week of June.

NFU national water resources specialist Paul Hammett said water supplies were sufficient for the general public – but the situation was bleak for farmers across a broad swathe of the country, stretching from north-west England through to East Anglia and the South East.

Some 26% of winter wheat is in poor or very poor condition, according to the latest Adas Crop Condition report. The figure compares with 5% at this time last year – and is a big deterioration since March when the figure was 18%.

North Norfolk farmer Kit Papworth has had just 6mm of rain in the past six weeks. He said crops which had justified expenditure on fungicides and fertiliser only a few months ago were now dying in front of his eyes.

“We’re going to have a shocker – it really is going to be terrible,” said Mr Papworth. “I can’t remember north Norfolk looking so bad in May – it was always meant to be the month when you were proud of what you had done.”

Coming on the back of the wet autumn, Mr Papworth said it had been one of the worst years, weather-wise, in his farming career. Although cereals were irrigated where possible, it was sometimes hard to justify when sugar beet and potatoes were also in the rotation.

The Environment Agency said river flow rates had decreased at most sites it monitors across England. Rates are classed as noticeably low at one third of sites. For the past 11 weeks, rainfall levels had been low or exceptionally low across England, it added.

Warwickshire beef and sheep farmer Adam Quinney said he had very little grass left, with his livestock about to start their second round of grazing. Rather than finishing cattle on grass, he was resorting to bought-in silage.

“It is a bit of a conundrum,” said Mr Quinney. “For anyone finishing cattle at the moment, anything involving expense is a heartbreaker.”

Producers suffering from low beef prices for the past 12-18 months were still recovering from the effects of the 2018 drought, he said. This had left them short of fodder and forced up feed bills – so there was less room to manoeuvre financially.

Livestock farmers are being advised to step up plans for a summer drought, with some farms reporting that grass growth is 40% behind the long-term average.

Forage Aid charity founder and Lincolnshire farmer Andrew Ward said some producers were already running tight for feedstocks. “While we can hope that rain arrives in time, hope is not a strategy for good business planning,” he said.

Forage Aid trustee Neil Wilson, who is also executive director of the Institute of Auctioneers and Appraisers in Scotland, said farmers should make use of several resources available to help them plan for dry conditions.