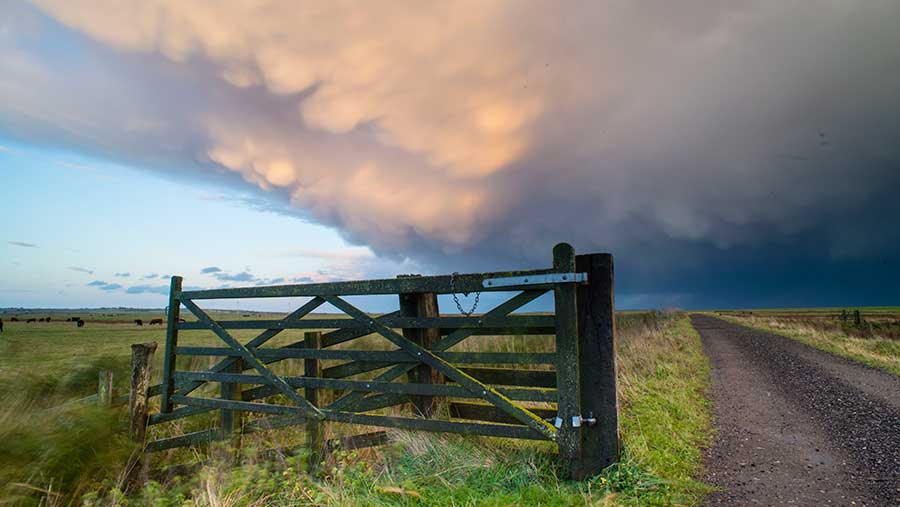 Farmers in Northern Ireland and north Wales are bracing themselves for gusts up to 80mph brought by ex-hurricane Ophelia.

Weather warnings are in place for very strong winds in Northern Ireland, western and northern Britain on Monday and Tuesday (16-17 October).

However, the forecast for other areas – such as south-east England – is good, with warm and mainly dry conditions likely to dominate.

See also: How Farmers Weekly covered the ‘Great Storm’ of 1987

#Ophelia is now classified as an Ex-Hurricane. Both us an @MetEireann have issued warnings for strong winds. Stay #weatheraware pic.twitter.com/cn6TdOLSwk

Met Office chief forecaster Steve Ramsdale said: “We have issued an amber wind warning for Northern Ireland for the most intense period of winds between 3pm and 10pm on Monday.

“During this period, we can expect wind gusts in excess of 60mph, with a chance of 80mph gusts for the southeast of Northern Ireland.”

Mr Creed said: “Priority is obviously the safety of people and I would reiterate the advice that only essential travel should be taken. For farmers they should ensure that their yards are secured by securing loose objects.”

Is your farm ready for #StormOphelia ? Loose material on farms should be tied down to avoid being blown around and causing damage.

The minister also reminded landowners of the dangers of fallen trees, in particular the impact this can have on electric wires. Shed doors should be securely fastened and older slat roofs sheds avoided.

“If you have to check on livestock, bring a family member or neighbour and in more exposed and remote areas, wait until the storm abates,” he added.

Ophelia is passing south of the Azores in the Atlantic Ocean. When it hits the UK, it will be downgraded from a hurricane to a storm – almost exactly 30 years after the Great Storm of 1987 struck, killing 18 people.