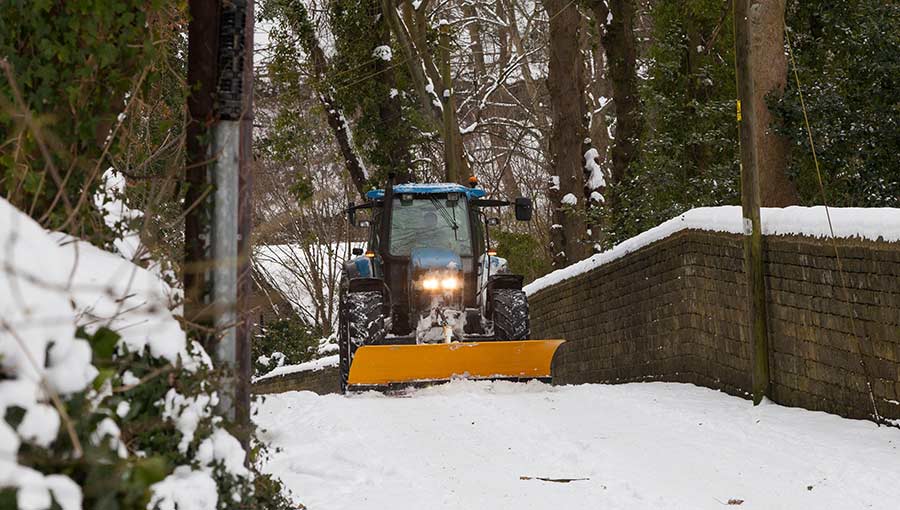 Farmers have been out in force across the country helping to grit and clear snow and ice from public roads, as temperatures plunged below freezing.

Farm contractors were out clearing snowfall in upper parts of Swaledale and Wensleydale and the North York Moors over Blakey Ridge earlier in the week.

But the council’s gritting operation was out in force across many of the county’s remote road networks on Wednesday night (30 January), “the coldest night of the year”.

Mr Beary tweeted that his farming diversification was “in full swing” on Wednesday (30 January), as the cold weather set in.

In neighbouring Derbyshire, gritting teams, including some 50 farm contractors, have been out clearing snow and ice from roads across the county this week.

In Scotland and Wales, councils reported drafting in hundreds of farm contractors to help grit roads in sub-zero conditions.

32 gritters & 2 fast-trac tractors out working hard across trunk roads in the north west of Scotland just now – YELLOW warnings for #snow & #ice in place until 11am! Please drive to conditions & #TakeCare if out: https://t.co/nhj5DHhasB pic.twitter.com/pxpN70xcvZ

Elsewhere, farmers have been posting dozens of photos and videos on social media of the effect of snow on their daily farming operations.

No such thing as a snow day round here, not when we’ve got stock to feed!! The Red Polls absolutely loved their meals on wheels this morning, thank goodness for 4 wheel drive!!??#snowing #whiteover @tatton_park @JohnDeere @redpoll_cattle pic.twitter.com/eWV9hVY8HF

The Met Office has issued warnings for snow and ice for many parts of the UK on Thursday (31 January) and Friday (1 February).

Chief meteorologist Steve Ramsdale said: “Areas could see rain and snow for periods of six to nine hours, with 1-3cm of snow gathering in places within the warning area and the potential for 5-10cm, perhaps most likely in the South West and over Wales. Snow amounts will vary, with many places seeing very little.”

The weather is forecast to stay cold into the weekend with wintry showers, particularly in the north and east of the UK.

Landowners’ organisation, the CLA, urged farmers to “winter-proof their businesses”.

Tips include making sure vehicle and machinery tyres have sufficient tread, working with neighbours, and ensuring there are adequate livestock feed supplies if deliveries are affected.

* Don’t forget to upload your snow photos on our Weather Watchers gallery.