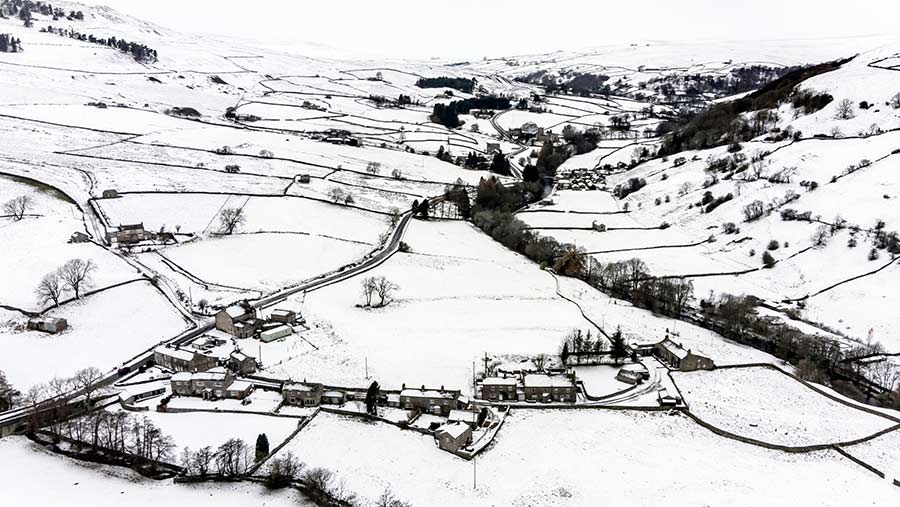 Farmers across the UK have been left counting the cost after Storm Arwen ripped through holdings and caused havoc at the weekend.

The Met Office said the storm delivered some “dangerously strong winds” in excess of 60mph in many places, and a top lowland gust recorded at Brizlee Wood in Northumberland of 98mph.

The Pennines and parts of Scotland were among the worst-hit areas where farmers battled through strong winds, rain and heavy snow to feed their livestock.

Three people were killed by falling trees and the Met Office warned that after a milder interlude at the start of the week, cold conditions would move in again from the North.

Almost 250,000 homes were left without power, and some farms turned to using generators to heat their homes and gas stoves to cook their foods.

NFU Scotland (NFUS) said it was receiving reports of substantial storm damage to farm businesses from its members.

One has estimated that the structural damage to his business is approximately £70,000. Another has recorded that an acre of Sitka Spruce trees on his farm has been blown down.

NFUS president Martin Kennedy said hundreds of trees have been blown down on his own estate near Aberfeldy, in Highland Perthshire.

Mr Kennedy spent Sunday 28 November helping clear roads and driveways to allow people access to and from their homes and to get services into the area to reconnect electricity and telephone services.

One casualty of the weather is the north-east rural crime event, which had been scheduled to take place at Gray Farms, Portsoy, on Wednesday 1 December. The event will be rescheduled for early in 2022.

Young farmer Ben James, a new farming entrant and a partner at Brynmair Farming, based in Lampeter, Wales, posted a video of his lamb shed, after it was flattened by the storm.

Hill farmer Amanda Owen, based at Ravenseat Farm situated at Upper Swaledale, North Yorkshire, said she was having a “stressful time” battling the elements.

The Yorkshire Shepherdess shared photos and videos of the effect the storm had on her farm, warning her followers to “never forget the power of nature”.

Never forget the power of nature.
A beautiful and yet brutal scene.🏔 #StormArwen pic.twitter.com/3fdiGqjD0M

The ferocity of #StormArwen was unreal. With no power & a number of near brushes will falling trees and drifting snow it has been a stressful time.
Not complaining though as we’re alright and there’s plenty of folk that are really struggling during this.❄️❄️🌬🌬 pic.twitter.com/n73JCKzvNB

“There was lots of destruction. Trees and pylons are down all over. Many roads are closed, and farms and stock are shut off due to roads becoming blocked.

“Some farming friends in Swaledale have told me they will be without electricity for 10 days. Some houses have only just got power back.”

Mr Priestley added that diesel generators in the North East had all been sold out.

Herdwicks of Highfield Farm, based in Staffordshire in the Peak District, posted a wintry scene of the farm on Twitter on Sunday 28 November.

Morning everyone, yesterday was brutal. Still no power but luckily we have a generator. Many hours spent searching & digging sheep out all flock accounted for. Hope everyone else has stayed safe #snow #winter #StormARWEN pic.twitter.com/xUehcLr04M

First priority yesterday was checking the flock, 3 young rams were missing & could only find 6 ewes. My heart sank as fields, walls had been joined by drifts & gateways blocked. Ideal place for the sheep to take shelter. Droopsy emerging from there shelter spirits lifted #storm pic.twitter.com/1KlO4S6JsC

Tweeting farmer @fleurrbie posted a photo of dozens of trees uprooted on the farm, describing the destruction as heartbreaking.

Insane storm damage at home .. only one route in/out from the farm.. so much destruction.. absolutely heartbreaking to have lost so many beautiful trees … 🌲🌲🌲😔💙 pic.twitter.com/jrnVV4vD7f

Rural insurer NFU Mutual said it responded to hundreds of calls over the weekend from farmers reporting significant damage to their buildings, with roofs being blown away completely.

“From the reports we have received from farmers and homeowners, this is the worst windstorm to hit the countryside this year,” said Jon Bird, property claims manager at NFU Mutual.

Tenant farmers Charley and Andrea Walker, who run Barnside Farm, a 253ha upland beef and sheep farm in the Scottish Borders, said the storm has caused serious damage to the forestry.

At least 50% – but more likely 75% – of the conifer woodland in and around fields had been destroyed, Mr Walker said.

Hard to take in the scale of the devastation here. Whole woods flattened, thousands of trees down. People & animals all safe. It’s going to take a long time to straighten out and shelter will be a challenge for years to come. pic.twitter.com/D23NkzNEYm

“These small woods are done,” he told Farmers Weekly. “There are places where trees have nearly all been uprooted and other areas where they have snapped off.

“A lot of the timber which was planted here after a big blow in 1967 appears to have come down. The landlords started planting some hard woods and hawthorns about 15-20 years ago, and to some extent these are still standing.”

The trees provided vital shelter to livestock, especially during outdoor lambing and calving, and this would affect his farming operation most. “It has probably taken one-quarter of the farm that had really good shelter for stock to almost zero.”

The farmers, who won the 2019 Farmers Weekly Grassland Manager of the Year award, were aware of the rare Met Office red warning of danger to life, so they stayed inside their stone farmhouse when the storm broke on Friday afternoon (26 November).

“We could hear ‘bang’ every time a tree had gone. I thought, there’s no way I’m going out there,” said Mr Walker. “It was pretty savage and ferocious.

“Thankfully, our people and animals are all good. I don’t know how we did not lose any cattle. Maybe the cracking of the trees spooked them into the middle of the fields.”

Mr Walker said it would take the farm some time to rebuild, but he felt fortunate that no lives had been lost.

“The shelter for livestock is a big loss, but I cannot change it. For the infrastructure stuff, we have just got to set to it. Fences can be rebuilt and fixed; lost lives can’t.”

Has your farm been hit hard by Storm Arwen? Send us your photos and videos to philip.case@markallengroup.com