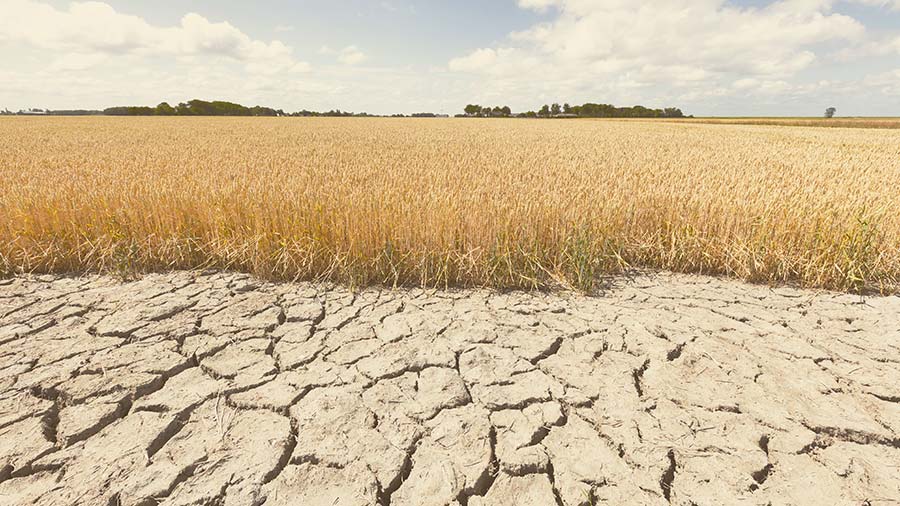 The National Farmers Union (NFU) has filmed a future weather forecast to highlight the need for farmers to have their fair share of water for efficient crop and livestock production.

North Yorkshire farmer James Johnson, 28, presents the plausible forecast for 11 July 2050, which illustrates some of the impacts of climate change that farming businesses can expect to experience by then.

In the video, published on YouTube, the forecast predicts far drier, hotter summers with a temperature high of 45C, the UK’s first ever olive harvest, as well as a high risk of wildfires in moorland and key arable areas after serious crop fires.

Livestock farmers are warned to maintain air conditioning units in their sheds amid serious concerns about animal heat stress. However, the planting of Mediterranean drought-resistant tree species is helping to provide shade for animals.

The “scorching” weather has also triggered changes in the working day for farmers.

Heat health warnings mean ongoing restrictions on outdoor farm work between 12pm and 3pm. As a result, farmers are forced to use on-farm solar rays and battery sources to enable night-time working.

After 14 consecutive days of temperatures above 30C, Mr Johnson forecasts an end to the heatwave in the coming week. But this will come too late to mitigate a severe drought on mainland Europe, which has affected fruit and vegetable supplies, risking national food security.

However, Mr Johnson says the water situation “makes grim reading”, despite the installation of super reservoirs.

Rainfall is 20% down on the monthly average, river flows are “below critical levels” and irrigation is restricted to evenings only under “extreme heat quotas”.

The NFU released the forecast during Great Yorkshire Show week to highlight how different farming could look in 2050 as the industry tackles increasingly extreme weather patterns predicted by meteorologists.

The forecast aims to prompt discussion about the climate challenges facing Yorkshire farmers now and in the future.

In particular, the need for a more joined-up integrated water management strategy to help British farmers achieve their goal of leading the world in climate-friendly food production.

Speaking on the first day of the show (13 July) NFU president Minette Batters will urge government, water companies and farmers to properly invest in water management as a critical response to climate change and will call for a long-term, collaborative approach.

“We cannot underestimate the importance of food production as we chart a course through our climate challenges. We can deliver on our net-zero pledge while retaining, if not growing, our agricultural capacity, but adopting a new approach to water will be essential.”

Since 2002, the UK has recorded its top 10 warmest years on record and Yorkshire farmers are already at the sharp end of increasingly extreme weather events.

They suffered significant damage when the county experienced three once-in-100-year floods in 2019/20, but consistently hotter, drier summers also have the potential to severely impact food production.

Alongside growing 14% of the nation’s arable crops, Yorkshire also produces 19,000ha of potatoes, 16,000ha of field vegetables and 200ha of glasshouse crops – all relying increasingly on irrigated water in the summer.

With extensive upland areas and permanent pasture taking up more than one-third of the county’s geographic area, the impact of increasing drought will also be severe on the livestock farms dependent on grass growth.

This is why the NFU says a more strategic approach to water is needed.

“We must make far better use of abundant winter rainfall, rather than simply pumping it out into the North Sea as we currently do,” said Mrs Batters.

“This will require a collaborative approach involving both public and private sector partners, ­and farmers must play their part in the process.”

By 2050, the Met Office predicts UK summer heatwaves are likely to happen every other year.

The UK will host the UN climate change conference (COP26) in Glasgow in November when the nation will be at the centre of global discussions on how to respond to climate shifts.

Watch the farming weather with Weather Quest, updated every Tuesday on our weather page.