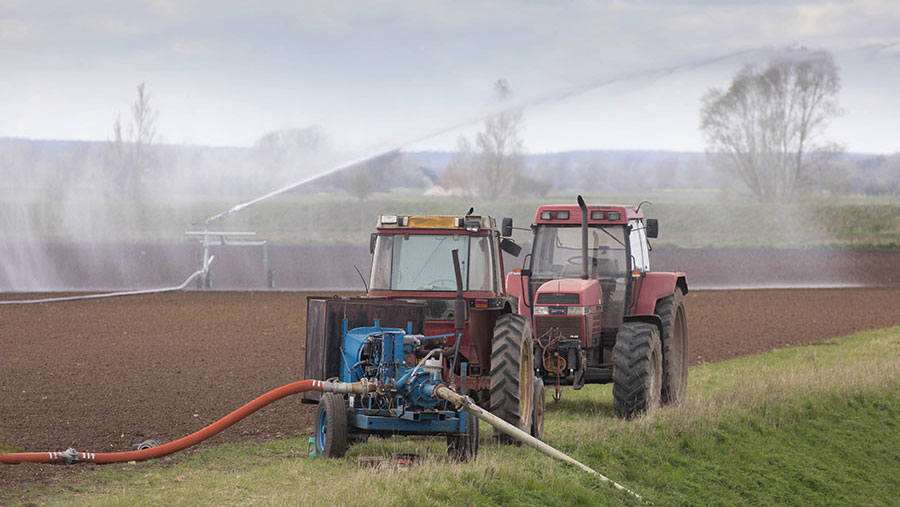 With dry weather conditions forecast to persist across the UK, farmers are being urged to take steps now to mitigate the impact of challenging growing conditions on their businesses.

According to the Met Office, on 20 April, the UK had seen just 16% of the average rainfall for the whole of the month of April, a figure that should be at about 63%.

“It has been particularly dry in England, where just 8% of April’s overall average amount has fallen so far,” said a spokesperson.

With no sign of much-needed rain in the forecast, the situation is concerning for agriculture.

Grass growth has been checked by the dry and cold conditions – the Met Office said average temperatures in the first three weeks of April were 2-4C cooler than normal.

Although cutting grass when yield is poor is counterintuitive to the mindset of growers, they must, Dr Davies advised.

“Don’t delay cutting when the base of the grass sward starts to die.

“Evidence from the field shows that if you cut it when it is at the leafy stage, the residual will be more drought tolerant and the regrowth quicker because the plant hasn’t gone into the dormant stage,” he said.

“It will be ready for that rain when it does come, to burst into life and get going again.’’

But aim for a stubble of not lower than 7.5cm as regrowth will be poor if it is cut any lower, he added.

In the arable sector, earlier autumn-sown crops are well established to cope, but shallow rooting is a problem in late-sown crops as they are unable to reach subsoil water reserves.

Guy Smith, who farms in St Osyth, Essex, said unlike this time last year, he has winter crops in the ground, but the lack of moisture is a big problem for his spring wheat.

“That is sitting in dust, it needs to chit before we hear the first cuckoo, but it is not going to do that unless we get an inch of rain,” he said.

“We have barely had a millimetre of rain since February – the rain tap is either on full bore or shut off, which is pretty maddening.”

“I’m not panicking yet, but if we don’t get rain pretty soon then we will have to look at adapting our crop management plans.’’

Some growers are delaying forward selling, gambling on further gains in grain futures if supply slows.

But Tom Rees, who grows 243ha of combinable crops in Pembrokeshire, said this was risky.

“I know my costs, and if I can get a good margin, I’d rather take that than gamble on the markets because they are influenced by so many things.

“The UK is such a small player in the global markets.”

Tips on making businesses resilient in the dry spring

Both arable and livestock farmers can take steps to counter the impact of the dry, cold spring on farms.

In grazing systems, AHDB advises reducing daily grass demand to below daily growth rate by supplementary feeding, to protect current growth and to speed up recovery when rain arrives.

In arable systems, good soil consolidation at planting is critical to lock in moisture, according to Cheshire-based agronomist John Hood.

Consider foliar-applied nitrogen to introduce moisture and to get nutrients to the plant root rapidly.

“We are getting heavy dews in some parts of the country and they are just about dissolving granular fertiliser, but liquid feeds get straight into the ground and get the crop off to a good start,’’ said Mr Hood.