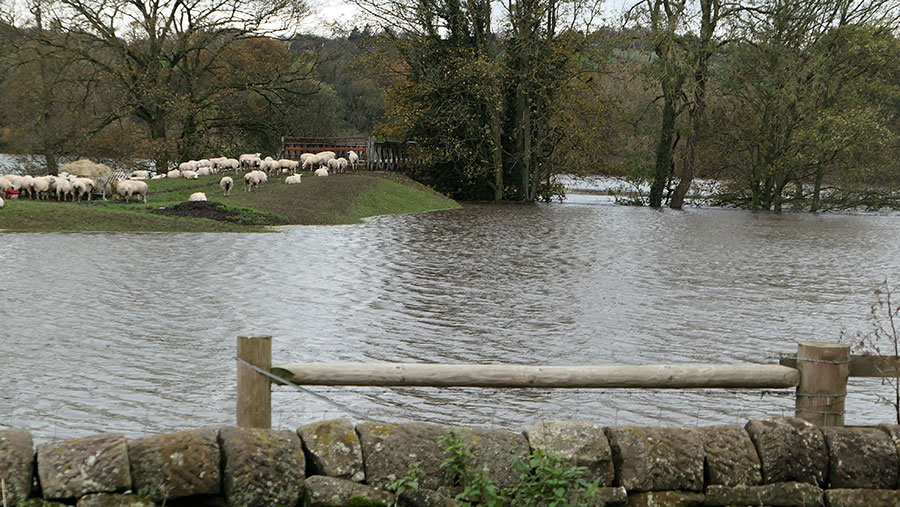 Farmers are being warned to expect more torrential rain and another week of unsettled weather, as the autumn washout continues.

The Environment Agency has five “danger for life” flood warnings in place in England, as farmers have been told to expect more downpours this week.

A further 39 active flood warnings, meaning flooding is expected, and 98 alerts, where flooding is possible, were also issued on Monday (11 November).

The five severe flood warnings in force affect five areas in and around the River Don in south Yorkshire, but flood warnings are also in place for the North East, central and south-west England.

In Scotland, farmers and crofters have been warned to expect snow falling on higher ground, with 5-10cm expected in some areas.

Are you a farmer who has been affected by the flooding? Email your pictures and stories to philip.case@proagrica.com

The Met Office has issued a yellow weather warning for rain for an area east of Manchester and into Sheffield for Monday up to 12pm Tuesday (12 November).

There is a risk of further heavy rain across Sheffield, Lincolnshire and Nottinghamshire on Thursday (14 November) in areas where farms are experiencing ongoing flooding.

Snow and wintry showers could feature in parts of the West Midlands, Shropshire and the Cotswolds from Wednesday (13 November), as temperatures are set to plummet.

Met Office spokesman Grahame Madge told Farmers Weekly: “From an agricultural perspective, it is going to be quite a challenging week.

“We are in for a very unsettled week. There is pretty much every type of weather forecast, but some places will see some quite nice weather, albeit it a bit windy.”

Over the weekend, snow fell in parts of Britain as temperatures plunged to -7C in the Scottish Highlands. Snow also caused disruption on farms in north and mid-Wales, Devon, Cornwall and northern England.

Farmers have been posting dozens of pictures on social media, telling stories about how they have been coping with the floods. Some have described this autumn as the wettest they have known.

Extensive flooding along the flood plains and grazing areas is affecting farms near the River Trent in Nottinghamshire.

No grouse moor in sight here in #Springthorpe. The reason my farm flooded is the same reason as why Sheffield flooded – because it rained (a lot) ? pic.twitter.com/0VitBN1AfD

“People who farm near the River Trent are used to the river bursting its banks, but you don’t want the water sitting there too long,” he said.

Robert Robinson, who farms near Fishlake, by the River Don, said his whole farm is covered in water.

He told the BBC: “We’ve animals that are suffering because of the water and we can’t get in and out without tractors.

“We desperately need the River Don to be dredged and cleaned out – it’s there to transport water and it’s not doing its job properly.”

Farmland to the east of Lincoln has also been severely flooded. One farming family in the area has been evacuated.

This video is from the fen again. The water is now 1 meter deep were is was taken from yesterday. We now have 500 + acres under water now and gates are still open. pic.twitter.com/8wjxrFjSti

Lincolnshire grower Andrew Ward tweeted that the conditions on farms near Lincoln are “horrendous” and he warned the wildlife destruction “will be unthinkable”.

He urged the government to launch an investigation into the floods, including the role of the Environment Agency.

Went to see the extent of the flooding east of Lincoln today, this due to a collapsed river bank. Horrendous. The wildlife destruction will be unthinkable. The government needs to have a full investigation with @EnvAgency Farmers livelihoods and well being are starting to suffer. pic.twitter.com/4LjVM621Od