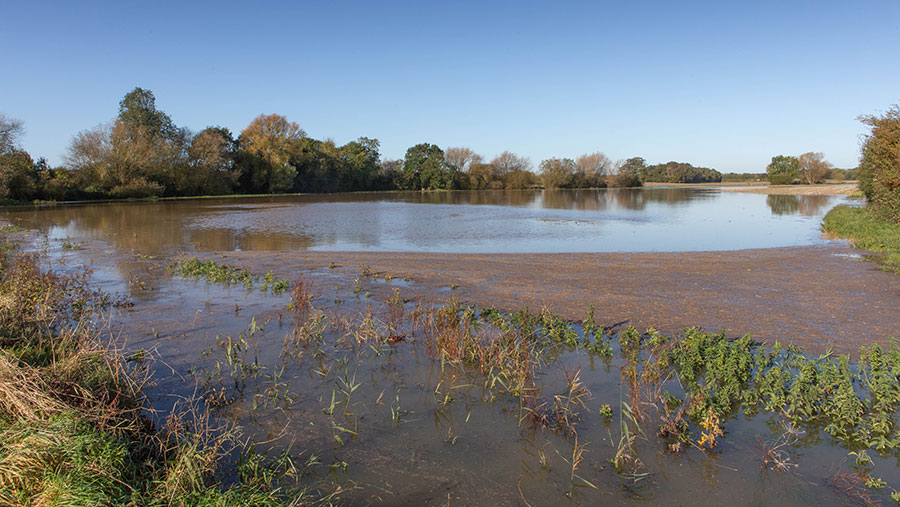 Prolonged rain continues to play havoc with fieldwork – prompting calls for the government to declare a “force majeure” weather event for farmers unable to meet scheme requirements or obligations due to circumstances outside their control.

Further rain is expected across a swathe of the country over the next 24 hours – with up to 100mm forecast to fall across the Yorkshire Pennines.

The Met Office has issued an amber weather warning, saying heavy rain is likely to cause flooding and disruption, including danger to life.

It follows weeks of wet weather, which has made drilling winter cereals impossible on many farms – and stymied the lifting of root crops.

Livestock farmers are being forced to bring in livestock weeks earlier than usual.

Rainfall for September 2019 was almost double the amount seen during the same month last year, with many fields still sodden or sitting under water.

In Lothian, Scottish farmer Willie Thomson said his farm was averaging 10mm of rain each day so far during November.

He has abandoned autumn sowing and will plant spring wheat instead.

We are averaging 10mm rain/day so far in November. Pulling the plug on autumn sowing and placed seed order for spring wheat this morning. @NFUStweets #wetwetwet pic.twitter.com/AjGrTtKhOZ

In Cornwall, Mike Hambly said he had yet to plant any winter barley or wheat.

Still yet to sow a grain of Winter Barley or Winter Wheat. It’s been dire here. Just the Winter Oats planted. Yesterday was just horrendous with all but another inch of rain ?

In south Lincolnshire, David Hoyles said he was trying to stay positive after a challenging potato harvest forced him to leave crops in the ground.

Another field finished……well, chopped up. Wet/flooded area from June/July that increased from 0.2ha to 3ha of greens, growth cracks and hollow heart. Glad I don’t have to look at it anymore down our farm lane. Massive effort from the harvesting and grading team thank you. pic.twitter.com/EI2oIDmmkD

The NFU said it was urging Defra and its agencies to take a “common-sense approach” to managing the effects of consistent wet weather and flooding for farmers.

It said it was in an “ongoing dialogue” with Defra, the Rural Payments Agency and the Environment Agency to encourage flexibility and ease cashflow problems.

The RPA has been asked to ensure affected farmers receive their annual basic payment as early as possible when the payment window opens next month.

The agency has also been asked to consider declaring a weather event as “force majeure” for farmers in agri-environment schemes.

Agreement holders are being urged to contact the RPA if they are prevented from complying with their scheme obligations as a result of continued weather pressures.

“I’ve heard from members across the country who are increasingly worried about the impacts this will have on their businesses next year, particularly increased financial pressure.

“That’s why it is absolutely critical that Defra takes a common-sense approach to how it manages this situation, particularly ensuring affected farmers are paid promptly at the start of the payment window next month.

“It’s at times like these that Defra needs to remember it is a supportive department for the nation’s food producers, not just a regulatory one.

“Our future domestic agricultural policy must recognise this and ensure there are measures for farm businesses to manage volatility, particularly in the face of increasingly unpredictable weather.”