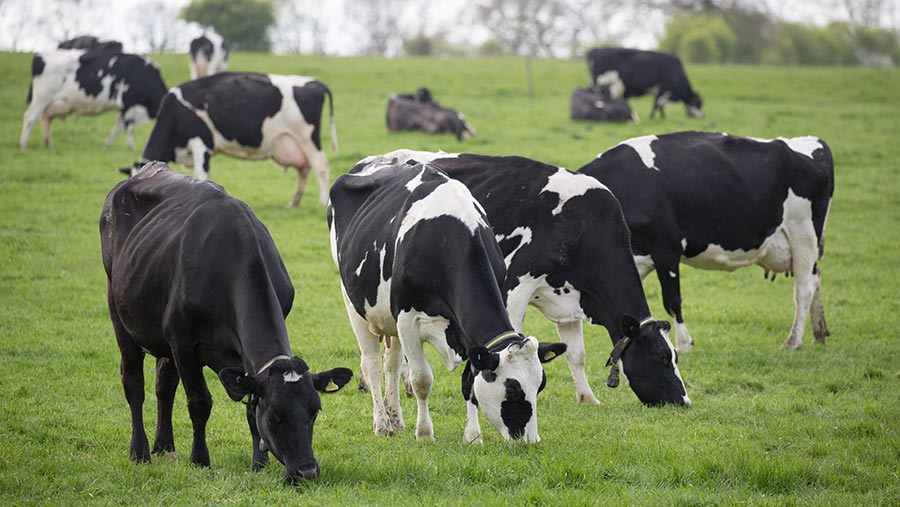 Livestock and arable farmers alike have been taking advantage of the record-breaking winter temperatures across the UK by drilling crops, applying fertiliser and turning out animals.

This time last year the Beast from the East was wreaking havoc on farms across the UK, with temperatures plunging as low as -10C in parts of Scotland.

Sheep farmers had to dig their flocks out of snowdrifts, dairy farmers were forced to throw away milk as tankers struggled in the treacherous conditions, and others spent hours defrosting pipes and rescuing stranded motorists.

In sharp contrast, this year people are dusting off their sunglasses, bringing out the shorts and T-shirts, and watching with astonishment as the temperature gauges keep on shooting up.

This week the UK experienced its warmest February day on record, with the Met Office reporting a temperature of 20.6C at Trawsgoed, Ceredigion, on Monday (25 February) – the first time a temperature of more than 20C has been recorded in winter.

February’s previous hottest day was 19.7C, recorded in Greenwich in 1998.

A new English record has also been set, with temperatures rising to 20.1C in Hampton Water Works, in south-west London, about 10 degrees above the average for this time of year.

The dry, mild winter has presented ideal conditions for drilling and arable farmers are taking the opportunity to get their beans and barley in the ground.

Seemed rude not to do some spring drilling on a day as nice as this one was so we did;
Planet Barley is go for launch.
☀️?? pic.twitter.com/WtNQc1GPtf

Cambridgeshire farmer David Walston has been applying liquid fertiliser to spring barley and has already started drilling peas. Usually he waits until mid-March to try to avoid the cold weather.

Spring barley drilling has also begun in Suffolk, where Michael Balls is hoping for a benign March, and on marsh land in Lincolnshire, where Phil Burrell calls the conditions “unreal”.

It is February right? pic.twitter.com/7EsyyS5RBm

Mixed farmer Richard Heady has started planting his spring crops in Buckinghamshire, a whole two months earlier than in 2018.

“It’s so hot that the ground’s pretty hard and I’m struggling to get the seed in in places, but while the weather’s with us we need to crack on,” he said.

“We need a lot of rain soon to balance things out.”

Difficult to complain about

Kent smallholder Katie Anderson suffered from a “hellish” winter in 2018 that has made her more cautious going forward. She said: “If I’d had this weather for February last year, I think I may still have all my livestock.”

What a contrast to this time last year! pic.twitter.com/Hn23zwZpAo

In south Wales, beef and sheep farmer Jacob Anthony said the comparison highlighted just how bad the previous winter was, when he had to take the unprecedented step of bringing in his entire flock to keep them safe from the snowfall.

“This year has been a difficult one to complain about, the grass hasn’t stopped growing and we were able to keep cattle out over the winter, which has helped keep costs down,” he said.

“My grandfather records the rainfall and he said January was the driest he’s ever seen on the farm.

“I know people who are lambing now are very pleased – I’m just hoping it holds and we don’t get another cold snap when we’re due to lamb at the end of March.”

Why has it been so hot?

Temperatures have been so high because of an extensive area of high pressure acting as a dome over continental Europe, according to the Met Office.

The “dome” has suppressed clouds and allowed sunshine to radiate to the ground. This combined with high pressure to the south east of Britain, bringing warm air from as far as Africa and the Canary Islands, has resulted in the higher than normal conditions.

This has been heightened in some areas by the foehn effect, when air warms as it flows down the lee side of mountains.

“Soils have been relatively dry, which allows the ground to warm up more quickly, so more heat is coming from these soils,” said Grahame Madge, spokesman for the Met Office.

“The temperature is set to fall to an average of 12-14C soon, which is still warmer than average for the time of year.”

Wind, rain and snow on the horizon

Friday (1 March) will be mostly dry and bright, but wet and windy weather is likely at the weekend, says the Met Office, and Northern Ireland and western Scotland could see gales.

Spells of wet and windy weather are likely to continue through next week, interspersed with some drier, brighter periods.

On high ground in the North, it may be cold enough for some snow to fall.

How to optimise spring crops through targeted marketing

Making a success of spring crops is all about knowing your markets and having attention to detail, according to the Duxford Monitor Farm.

Mr Mead farms 383ha in partnership with his father and David Hurst is the arable farm manager at Law Farming, which has more than 1,800ha.

Teresa Meadows, AHDB knowledge exchange manager, said: “It was clear to see from the gross margin figures we looked at, the real value of having definite markets for your spring crops.

“There was almost £300/ha increase in gross margins for growing spring barley and spring oats on a specific contract for a specific buyer.”

Spring feed beans offer the best return on variable costs for the non-premium crops, but they also have the lowest gross margin of the crops looked at.

Though spring malting barley came out on top for potential gross margins, it had the highest risk.

The other important thing is attention to detail, especially growing quality crops such as oats.

The final opportunity to consider is new crops serving the protein alternatives and free-from markets.