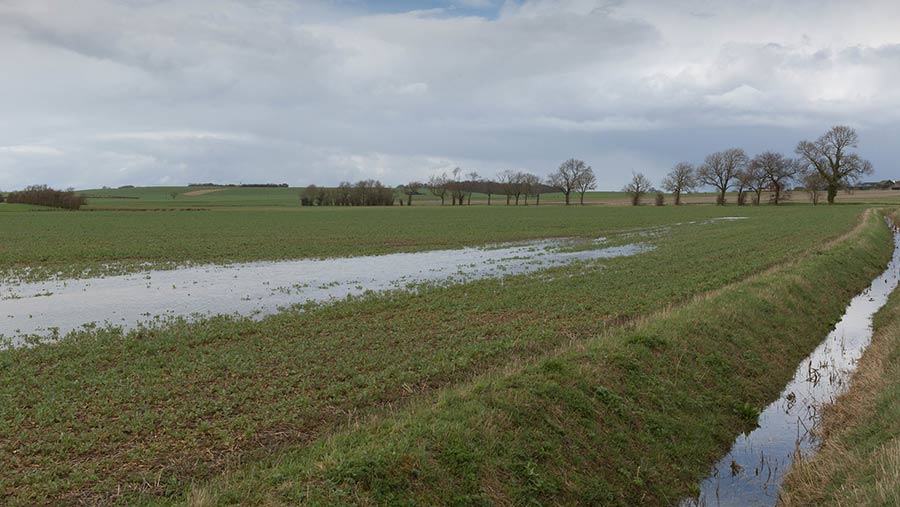 An urgent relaxation of the three-crop rule is needed to prevent flood-hit farmers being unfairly penalised, say industry leaders.

Thousands of farmers battling widespread flooding remain unable to get on to their land to plant crops.

The situation has prompted farm organisations to ask for an urgent relaxation of rules requiring farmers to have three crops in the ground between 1 May and 30 June.

The UK Farming Roundtable, which met on Tuesday (18 February), has called on the government to grant a derogation from the rule – and to broaden the extent of the Farming Recovery Fund to help flood-hit farmers with any uninsurable losses as a result of flooding.

“We are facing an unprecedented situation,” said a joint statement from the UK Farming Roundtable. “Relentless rain has meant some farmers won’t have been able to get on their land since the autumn.

“A significant area of farmland is currently under water following two storms in two weeks, compounding the already wet ground conditions from this winter,” it said.

“There will be many farmers out there really struggling; not just with the immediate impacts of the current flood water but the knock-on effects of damage to farmland and buildings, as well as significant impacts to this season’s cropping.”

Growers in Ireland, which has also experienced widespread heavy rainfall, succeeded in obtaining a derogation earlier this month.

It affects some 14,000 farmers growing crops to supply a range of sectors – including the animal feed malting and distilling industries.

The Irish Department of Agriculture agreed to the derogation due to exceptional circumstances caused by wet weather last autumn.

It said it would make an exception to the crop diversification requirements for 2020 on a case-by-case basis for farmers who met certain criteria.

The derogation covers farmers who declared winter crops, maize or potatoes on their 2019 BPS application; and who are able to demonstrate that they were adversely affected by the weather conditions in late 2019.

Defra has not yet responded to the UK request.