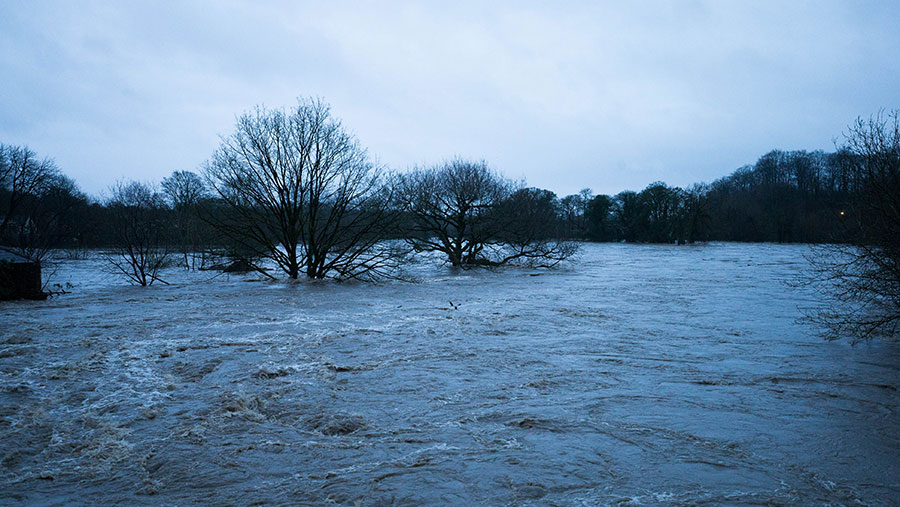 Farmers counting the cost of torrential rain from Storm Dennis are bracing themselves for more flooding with warnings the worst could be yet to come.

There are more than 200 flood warnings in place across the UK, including six severe, which means there is a threat to life.

A deluge of rain falling on already saturated ground is likely to make the flooding even worse.

Farmers have shared pictures and videos of submerged fields, unpassable roads and flooded barns, which show the extent of the damage and cost to their livelihoods caused by yet more extreme weather.

Arable farmer John Charles-Jones said on Twitter his fields near Nottingham are “saturated beyond belief” and called for “pragmatic practical help” from the government.

I doubt we will drill before April this year, if at all. Ground saturated beyond belief. Not only is there going to be a great and genuine need for stability payments as outlined by the ⁦@NFUtweets⁩, but farmers are also going to need pragmatic practical help from Govt. pic.twitter.com/o6CBqjU6Hv

David Miller uploaded a video to his Twitter page to show how the heavy rain was pumping nutrients and soil away from his neighbour’s fields in Hampshire and into his own.

Neighbouring farmers field gradually making its way across the road to join ours. Soil and nutrients on a one way trip. pic.twitter.com/wAQ5Zdv1qq

He added that the government had committed an extra £4bn to flood defences and there were currently 1,000 Environment Agency (EA) staff on the ground.

The EA urged farmers to sign up to free flood warnings and keep up to date with the latest safety advice by calling Floodline on 0345 988 1188.

Heavy flooding in south Wales made milk collection impossible on Sunday (16 February) from this farm (see below) near Carmarthen.

Storm Dennis makes milk collection impossible from this farm, hopefully the river Towy in Carmarthen will drop enough so we can collect the milk tomorrow. #keeptrying #milkcollection #teamdairy pic.twitter.com/9HqWQPLIQX

The rain has blocked roads and damaged rail lines.

The Met Office had issued a red warning for rain – the highest level – for parts of south Wales on Sunday morning.

It was the first red warning for rain issued since December 2015.

Highfields Farm, on the southern edge of the Peak District in Staffordshire, was left with a big clean up after heavy rain flooded a barn housing some of their Herdwick sheep.

Silt and stones were washed into the barn, which has now been cleared up, with all the sheep safe.

Woke up to the barn in flood.?Luckily the sheep only a few are OK their pen's & whole barn, thin layer of silt & stones. Wood, coal, feed wet. Big clean up today. Must be horrendous if its your house. #StormDennis #flood @FarmingUK @NFUCountryside #bigcleanup pic.twitter.com/CVu6J9Phag

Rural insurer NFU Mutual said: “Just as with Storm Ciara, our regional claims teams, agency network and suppliers are prepared and ready, to ensure we’re able to meet the needs of our members should they be affected by Storm Dennis.”

Has your farm suffered damage? Email your stories and photos of storm damage and flooding to ed.henderson@proagrica.com

The government has announced £1.2bn of funding for a supercomputer that will be used to help more accurately predict storms, select the most suitable locations for flood defences and predict changes to the global climate.

It will be managed by the Met Office and will also be used to help ensure communities can be better prepared for weather disruption.

The supercomputer is expected to be the world’s most advanced dedicated to weather and climate.

“It will ultimately provide earlier, more accurate warning of severe weather, the information needed to build a more resilient world in a changing climate and help support the transition to a low-carbon economy across the UK.”