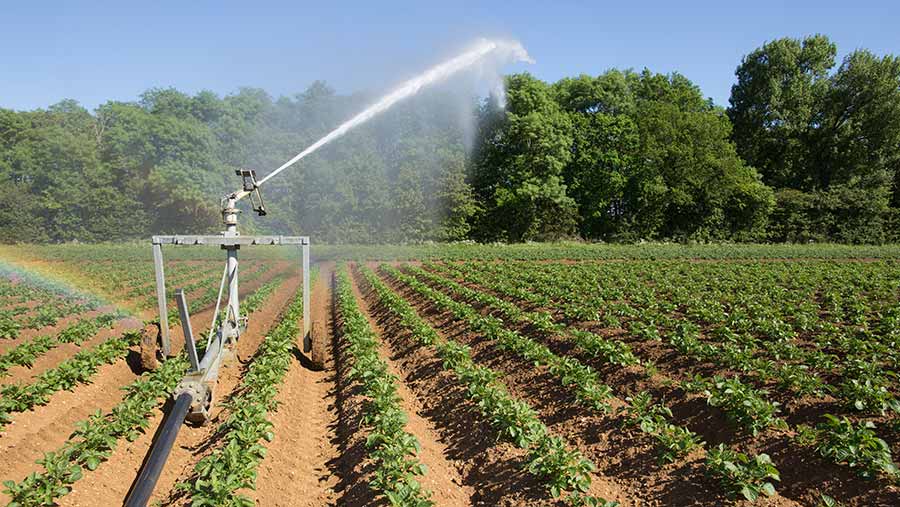 The Environment Agency says it will fast-track applications from drought-hit growers who want to trade water with other farmers in a bid to save crops.

“If the farmer can provide us with the right information, we can try to turn these around in a matter of days,” he said.

“We are trying to make our normal licensing process much quicker.”

This would allow farmers with spare water to trade it with farmers who needed it – as long as it was within the permitted maximum amount.

Mr Thompson was speaking during a farm visit organised by the NFU in East Anglia following a drought summit between farm leaders and government representatives.

Defra said the drought arrangements would be allowed only if the agency was “reasonably satisfied” there would be no adverse impact on the environment or other water users.

Suffolk vegetable grower James Foskett, who farms at Bromeswell, near Woodbridge, praised the agency’s farmer-friendly approach. Watch the video and read the rest of the report below.

His farm has seen no significant rain this summer.

“If I go back 20 or 30 years, when we had this issue before, they were like policemen – and actually they are not now,” Mr Foskett said.

“We talk to them, sit around the table in a sensible manner and we try to work things out together, so they are being great.”

Mr Foskett said 35mm of rain that fell last week had eased some of the pressure, but his daily water usage had been “huge” – something he hadn’t experienced before.

Vegetable crops grown by the farm include potatoes, onions and carrots.

Mr Foskett said some of the crops would be 20-25% down on yield, and quality was variable because it was so dependent on water.

The union had been lobbying to help farmers get the emergency support needed while calling for policies that would make it easier for growers to capture and store water in future.

“Farmers are really vulnerable when it comes to access to water,” Mr Hammett said.

“We need a system in place whereby local decisions can be taken by Environment Agency officers to give rapid help to farmers where they are able to do so.”