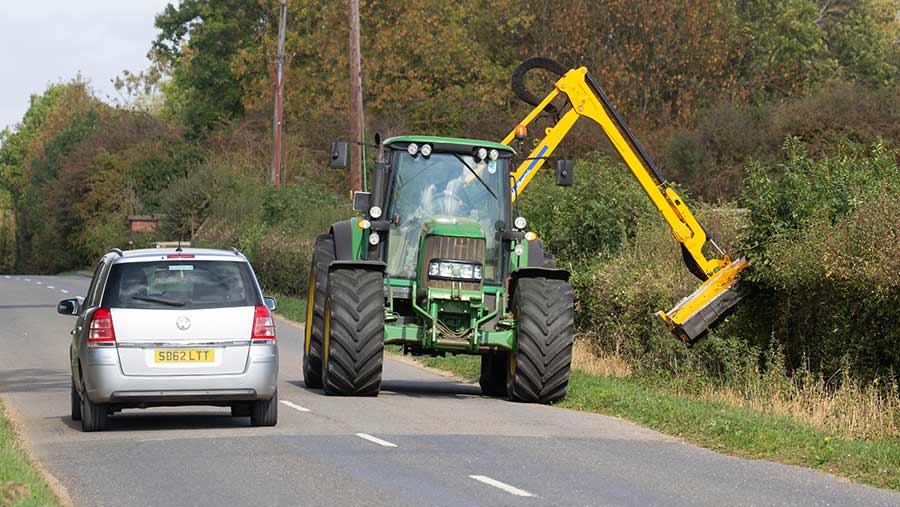 Farm contractors who specialise in hedgecutting are calling for more flexibility over cutting dates, after the washout autumn ruined their work plans.

Heavy rain and flooding have thrown autumn drilling plans into chaos and, on many livestock farms, animals have been housed early, increasing feed bills.

But specialist hedgecutting contractors have also been struggling, with many reporting low amounts of work completed.

After a dry August, persistent wet weather since September has left the ground too wet to travel on across much of the country – and farmers and landowners have been reluctant to let hedgecutting machinery on their land, risking soil disturbance and compaction.

Hedging contractor Robert Rutt, who trims about 2,630ha of hedges in the Northamptonshire/Leicestershire/Rutland area, said this autumn has been the wettest he had ever known.

“It’s been absolutely horrendous,” he told Farmers Weekly. “In a normal year, we would have done the insides of the hedges after harvest and the hedges on the roadsides in the winter.

“This autumn, we have not been able to get on the arable or grassland as it’s been so wet. We have had to cut the hedges on the roadsides this autumn to pick up the slack.”

James Green, farm manager at the Conant Farming Company, said only about 5% of winter wheat has been drilled at the Lyndon Estate in Rutland, where they are now planning large areas of spring cropping.

He has not allowed Mr Rutt to cut rotational infield hedges on the estate this autumn because it has been too wet.

“We have had 324mm of rainfall since the start of September. The ground is absolutely saturated and some fields are flooded,” explained Mr Green.

“Bob has cut some of our roadside hedges, but he has not done any hedges in fields. We don’t want to ruin our established grass margins.”

Mr Rutt said contractors feel their hands are tied, as since 2015 the hedgecutting ban has been extended to cover the whole of August – a time when they previously would have followed the combines round and trimmed hedges when the ground was still dry.

“If we had started one month earlier in August, it would have made a massive difference,” said Mr Rutt. “We would like Defra to put the start date back to 1 August.”

Mr Rutt considers himself lucky, as hedgecutting work on local authority land provides an alternative income stream. Even that has been limited to track sides and roadsides because of the waterlogged grass verges and parks.

But he added: “There are lots of one-man-bands out there – specialist contractors who only do hedge and grass cutting. It’s a lean time for them.”

Farmer Robert Hawtin, who farms 202ha near Towcester, south Northamptonshire, also carries out contracting work with his son James, who does the hedgecutting.

By Friday (22 November), about 80% of the wheat had been drilled at Bay Farm. However, about half the 36ha of oilseed rape drilled is expected to be lost.

The winter beans have been broadcast and ploughed in and Mr Hawtin is keeping his fingers crossed that they establish properly.

Only about half the hedgecutting has been completed on the farm and the 600ha of local farmers’ land.

He said: “We were held back in August for one month because of the regulation when it was like a dustbowl. Then September came, the heavens opened and it has been wet ever since. It has just stopped us in our tracks.”

The Hawtins are praying for a dry December. “We really need to make progress,” said Mr Hawtin.

Warwickshire farmer and agricultural contractor Chris Gardner said the wet autumn has brought his hedgecutting business to a stop.

“We haven’t turned a productive wheel in nearly 10 days,” he said. “We have three machines and trim up to 1,500ha of hedges on farmland across the county, but I am struggling to find any hedgecutting work for our guys.”

Mr Gardner urged Defra to review the current regulation around hedgecutting dates, saying it was “not a black and white issue”.

He said: “On every farm, there are hedges that are best cut long terms [every four to six years], but other hedges are best cut every year from an environment point of view.

“Now, more than ever, with the way the seasons are changing – and dare I say, climate change – we need to look hard at the start and finishing dates of the hedgecutting season.”

EU cross-compliance rules mean that Defra has to implement a ban on cutting hedges and trees on farms during the bird-rearing season, which in most of the UK is primarily between March and August.

The ban was extended to cover the month of August in 2015 and it has proven deeply unpopular with contractors as it forces them to sit out a whole month when they would previously follow the combines around and trim hedges after harvest.

But evidence from Natural England and the RSPB shows that some farmland birds, such as the blackbird, whitethroat, goldfinch, bullfinch and yellowhammer, rear and have late broods during August.

The hedgecutting ban runs from 1 March to 31 August (inclusive) in the UK.