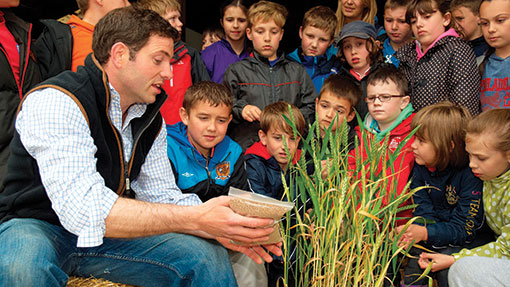 As farms across the UK are gearing up for Open Farm Sunday on 8 June, Farmers Weekly asks award-winning dairy farmer Neil Baker how his event makes a difference.

Banishing the public-perception myths about large-scale dairy farming was the motivation for 2010 Farmers Weekly Dairy Farmer of the Year Neil Baker to open his gates to the public for Open Farm Sunday. And on 8 June this year, he’ll be doing the same again.

See also: Open Farm Sunday sign-ups off to a flyer

The only difference this year is that Mr Baker will focus more on the day-to-day workings of his farm rather than spending lots of time providing visitors with other activities. According to Mr Baker, visitors are just pleased to have an opportunity to look around a real dairy farm.

“The first year we opened, we went to town, laying on a lot of activities to make sure visitors had a good day out. But all most people wanted to do was see the cows and calves and find out about some of the routine activities we do every day,” recalls Mr Baker.

“They go away having seen how happy and healthy our animals are and with a positive view of dairy farming – they tell five other people and it just mushrooms out.”

It was the high standard maintained throughout the 1,000-cow unit at Crewkerne, in Somerset, that won Mr Baker the top dairy accolade in 2010. All the milk produced by the herd, which is kept indoors all year round, is sold to Tesco.

“After winning the award, I felt a responsibility to speak up for my industry – not enough of us do. We get such a lot of flak from people who don’t understand large indoor dairy units because they’ve never seen one. Those who come to our farm are pleasantly surprised by what they see and are genuinely interested in how their milk is made.”

Last year, about 400-500 visitors turned up on Open Farm Sunday, to see cows being milked, calves fed and other routine activities. “We employ about 20 staff, who all helped on the day. Some were guiding visitors, while others were just carrying out their daily routines and answering any queries people asked. We also put up information boards to explain some of the simple facts about dairy farming.”

Visitors were kept away from the unit’s slurry lagoon and dirty-water treatment area, and simple hand-washing facilities were put together in the farm workshop. “The farm’s clean anyway, but we were careful to ensure visitors didn’t walk through any mucky areas. Hand-washing signs were the first and last things they saw, with the facilities positioned next to where we served up tea, coffee and biscuits,” says Mr Baker.

“Other than that, health and safety wasn’t much of a concern – we’d done a risk assessment, and in the first year we opened, some of the staff attended an Open Farm Sunday workshop. This proved really useful, both to address our concerns and to meet other farmers who had opened and to share ideas.”

For those thinking of hosting an event, LEAF is running a programme of free information events across Britain with top tips on promoting an event, health and safety, activities, getting your message across and much more. Call 02476 413 911 for details.

His top tips for farmers thinking of opening are to keep it simple and to be honest with visitors. “Make sure you have enough helpers and that your team is well briefed,” he adds.

“But even if only 10 visitors come, that’s 10 more people who’ll have an informed view of the dairy industry. I get a real buzz out of it – we work hard to maintain our high standards, and you can see not only the kids absorbing it and taking it all in, but their parents, too.”

And he believes that’s the key to turning around public perception of the dairy sector. “Sometimes indoor dairy units are perceived as the industry’s dirty little secret. Well, it shouldn’t be, and it certainly isn’t on our farm.”

Case study: Bring the classroom to the farm 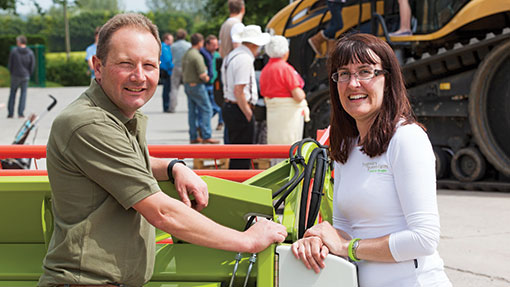 Farmers are encouraged to take part in Open Farm School Days and open their gates to local schools during the week before or after Open Farm Sunday (2-13 June). Introduced as a pilot scheme in 2013, the aim is to help farmers engage with their local schools and educate and inspire schoolchildren about farming.

For Nick and Claire Bragg, who took part in the pilot last year, it was a natural progression and a step they’re very glad they made.

“We’ve hosted a number of school visits in the past, then put on our first Open Farm Sunday event in 2012, which went better than we could have expected. So we thought we’d combine the two in 2013.”

Communication with the schools was the main challenge, he recalls. “You’ve got to keep in touch with them regularly and badger the teachers to come on a pre-visit – those schools that didn’t weren’t as prepared.”

On the day, they set up a number of stations around the farm and the children worked their way around in groups. At each one, there was someone there to explain what was going on and answer any questions – a team of helpers ensured the day went smoothly.

“You can’t involve enough people,” says Mr Bragg. “But it was an incredible day for the whole team. Just seeing schoolchildren smiling and having fun, but learning with it, is so rewarding. And at the same time you could see the teachers were enthused. Many of the children brought their parents along to our Open Farm Sunday event.

“The feedback we had was incredible too – the schools are now badgering us to make sure we invite them again this year. It was a lot of hard work, but well worth it.”

Whether you want to invite one class, a whole school or organise a multiple-school visit, get in touch with LEAF to register your event by calling 02476 413 911.