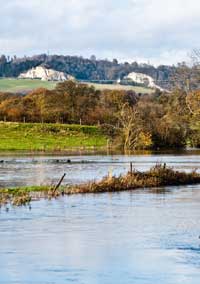 Forecasters have warned that more storms are set to hit Britain this week after a weekend of wet weather and high winds.


Parts of Wales and western Scotland saw some of the worst weather, with south Wales getting 17mm of rain overnight to Monday (16 November).

The south saw winds of 70mph over the weekend, reaching top speeds of up to 100mph, as well as heavy rain and storms.

More than 30 flood watches are still in place, with three flood warnings in the north-west and Wales.

A number of rivers around the country burst their banks over the weekend after the sudden downpours.

Farmland on the River Mole at Flanchford Bridge near Reigate in Surrey was overcome by flood waters after the river breached its banks.

While heavy rain had died down on Monday (16 November), the Met Office said more downpours are expected throughout the week, with the north-west of the country expected to see some of the heaviest rainfall.

Were you hit by the storms? How much rain did you see over the weekend? Let us know on our forums.