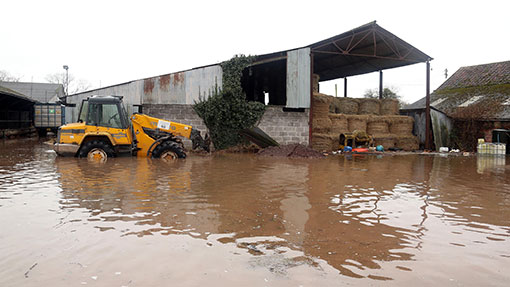 A young farmer from Writtle agricultural college has described co-ordinating the aid response for flood-hit farmers as a life-changing experience.

Earlier this year, farmers on the Somerset Levels were devastated by floods, which caused huge financial losses and left many businesses in ruins.

Young farmers played a critical role in helping stricken farms, providing vital supplies and support in some of the worst-hit areas.

Chelmsford YFC club secretary Elizabeth Ecclestone was one of those involved and was pivotal in co-ordinating the Essex Young Farmers’ forage aid initiative.

The 20-year-old, from Chelmsford, said as an agricultural student destined for the farming world, she couldn’t bear to see fellow farmers in trouble.

“It was clear the situation was an emergency with no feed or bedding for evacuated livestock and a whole year’s food supplies submerged by water.”

Working alongside vice county chairman Ed Ford, she helped organise and load lorries as well taking donations to support the farmers that faced losing their livelihoods.

During the peak of the floods, they visited some of the affected areas with farmer James Winslade, whose land was in one of the evacuated areas in the village of Moorland.

“The sights we saw were devastating and absolutely unimaginable. It was like I was looking out to sea, the water was so vast.”

They returned to Somerset for the second time to help with the work at a cattle market and to see the impact of the floodwater as it began to recede.

The damage to the area was still very apparent, according to Miss Ecclestone, with oil, rubbish and debris blighting the landscape. However, it was the severity of theft that really became evident on the second trip.

“Police check points had been constructed in and out of the village of Moorland as thieves had entered the deserted village on boats during the night and taken everything of value.”

With lorry loads of supplies, road sweepers and labour already being donated, Miss Ecclestone plans to keep working, as she hopes to take more donations and decide the best use for the money already given.