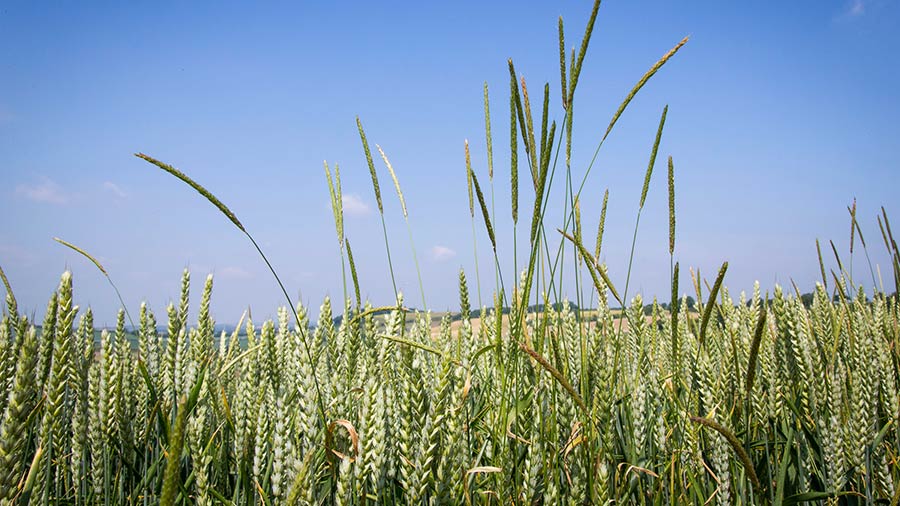 If grassweed control strategies are largely dominated by a herbicide-first thought process, at least until recently, then chemical-first thinking is even more ingrained with cereal disease control.

But as with weed control, reducing reliance on fungicides will make disease control in the long term more sustainable.

While some new products are making it through the regulatory process, both they and existing chemistry are at medium to high risk of resistance development when used alone, while older chemistry, such as the previously widely used multi-site chlorothalonil have been removed from the market, further reducing resilience.

In future, much more emphasis will be needed on how to minimise disease pressure through increasing the crop’s ability to resist or avoid infection, before turning to fungicides.

Those are the principles at the heart of a well-designed integrated disease management plan.

What tools are available to use in an integrated disease management plan?

This can be used when designing a rotation to minimise risk. For example, a non-host cereal, such as oats is an effective break crop for net blotch. For fusarium a non-cereal break is needed. Typically a two-year break is more effective than a one-year break.

For diseases which can also be spread via seed, rotation is only effective if the seed is treated or disease-free. The risk of infection from airborne diseases can increase if infected crops are grown in nearby fields.

Varietal resistance is perhaps the other tactic commonly considered by farmers for disease control, although other characteristics, such as yield, standing power and end market, can be conflicting criteria.

Yield responses to fungicides between the most and least resistant varieties can be as much 3t/ha. More disease-resistant varieties should allow both a lower spend on fungicide, but also greater flexibility in timing, application numbers and product choice.

For example, a septoria-resistant variety should not require a T0 application to insure against a weather-delayed T1 as disease progression in a resistant variety is much slower, unless other factors such as drilling date, weather or visible disease indicated otherwise. It might also not need more potent chemistry at T1.

Both would mean reduce costs and lowers the resistance selection pressure on fungicides.

A consideration to bear in mind is that while a variety might have good resistance to one disease, it may not have equally strong resistance to another, which can complicate decision-making.

Generally, septoria and yellow rust drive fungicide programmes so good resistance to these diseases is the best place to start.

There are two types of varietal resistance. Race-non-specific or multi-gene resistance does not give complete control, but varieties with this type of genetic resistance are not subject to sudden failure when the pathogen population changes. Septoria resistance is typically this type.

Race-specific or single gene resistance can provide complete protection against a disease. But if a new race forms that can overcome this single gene protection a sudden loss of control can result.

When such a change occurs, for example in yellow rust, the level of varietal susceptibility depends on its underlying race-non-specific resistance.

Cultivation is usually positive for disease control. It helps break up and bury infected crop residues for most diseases.

However, varietal resistance and rotation can reduce disease risk at least as much and often more than ploughing so if you’re not using much or any cultivation, it’s not necessarily a bad thing if you are using other approaches to lessen risk.

Drilling earlier in the autumn generally increases disease risk because the crops are exposed to infection for longer.

Generally sow resistant varieties before the most susceptible ones, but be aware very late sown-crops many be less able to tolerate seed- and soilborne diseases.

Biotrophic pathogens that rely on living plant cells to survive are favoured by high nitrogen levels in crops. Such diseases include the rusts and mildews.

Septoria is biotrophic initially before symptoms are expressed, before switching to using dead tissue (necrotrophy) during later stages of infection.

Crops fertilised with synthetic nitrogen often have lush growth and an altered canopy structure, which can also contribute to higher disease levels even for moderately resistant varieties.

Nutrition, in general, is becoming a focus for some farmers with a theory that providing plants with balanced nutrition will help keep it healthy by building both active and passive defences against diseases.

Tissue analysis, and increasingly sap analysis which measures and compares nutrients in old and new leaves, are tools being used to help manage both macro and micronutrients during the growing season.

While some growers are having success in growing crops with reduced fungicide requirements using these tools, sometimes in combination with biological inputs, this is very much an emerging science with lots to still learn about how to interpret these analyses.

Similarly to the use of nutrition, the use of biological products to help control pathogens is very much a niche area for cereal growing in the UK, although some growers are using them to reduce the amount of fungicide they are applying.

Examples of biological products include endophytes and elicitors. Endophytes are microorganisms, usually bacteria or fungi, that live in symbiosis with a plant and help the crop’s growth, ability to acquire nutrients and to tolerate stresses including pathogens.

Elicitors are naturally occurring compounds that trigger a plant to produce a defence response when it perceives it is under attack from a pathogen.

They usually work best when applied preventatively around GS30-GS33 by priming the crop ahead of the main disease epidemic.

Elicitor defence responses include increasing cell wall lignification, production of anti-microbials and systemic acquired resistance where the plant is primed to respond to attack before it is exposed to attack.

They can reduce the initial disease burden, but typically do not completely negate the need for fungicides.

Growing two or more crop together – intercropping – is another possible way of reducing disease pressure.

The most common intercrops are cereal – legume mixes, with peas, beans or clovers as the legume. Using clover a living mulch, for example, provides a barrier to splash dispersal of septoria.

The downside of intercropping two different crops is that it can be more challenging to grow with weed control, maturity date, separation of grains / pulses and rotation all factors to consider. It can also create conditions that favour some pathogens.

A slightly simpler form of intercropping, which is gaining popularity, is growing variety blends of the same crop.

This increases genetic diversity in the field, and can help slow or reduce spread in the field of some diseases, especially when varieties with different disease resistance profiles are grown.

Danish research by Rose Kristoffersen suggested that blends reduced septoria severity by around 10%, while yields increased by 1.4%.

Including more varieties in a blend produced a greater reduction in septoria, especially if there were both susceptible and more resistant varieties.

Blends made from just resistant varieties tended to show lower reductions in septoria, but the level of disease in those plots was also lower.

It’s not a tool as such as it cannot be controlled, but the weather is a crucial part of determining disease pressure, particularly for a rain-splashed diseases like eptoria and rhynchosporium.

Wet weather from April through to June increases eptoria risk, while windy weather can also physically spread spores. A mild winter has also been shown to be a high-risk factor.

For yellow rust cool and damp conditions create a higher risk, alongside a mild winter, whereas for brown rust hot and humid weather from April to July is important.

Monitoring weather through the winter and during the crucial spring period and understanding its impact on different diseases can help growers comprehend the likely disease threat and requirement for fungicides.

Crop walking to visually assess disease levels is a crucial another part of understanding disease pressure within a season and to judge fungicide requirements.

But it has one weakness – it’s difficult to tell whether a crop has any latent infection – infection that is not yet visible. All diseases have a period where symptoms are not visible, and with most fungicides better at controlling disease before symptoms are showing, this is a crucial piece of information.

Typically, farmers and agronomists judge that risk by using all the other factors available to them, such as weather, variety and drilling date, to make an informed decision.

But another tool is now available – the use of qPCR testing which measures the amount of a pathogen’s DNA in emerging leaves and the upper canopy at key times.

This service is offered by companies, such as Bayer through its Rapid Disease Detection service, and can help provide another piece of information on which to base decisions about fungicide requirements.

The last piece of a good integrated disease management plan.

In wheat the aim is to minimise infections on the flag leaf and leaf two, as well as in the ear, as these contribute most to total yield. In barley, earlier infections around GS31 are more important as these can reduce photosynthetic area, reduce tillering and result in lower yields.

Timing of sprays is crucial to maximise efficacy. The optimum timing is when a leaf has just fully emerged, and a well-timed spray can avoid the need for higher doses and extra sprays.

As with herbicides, using a diversity of modes of action to control diseases, especially ones like septoria which have a propensity for mutating and becoming resistant to fungicides is crucial.

Multi-site actives, such as chlorothalonil, have nearly all disappeared because of loss of approval, which has taken away an effective level of protection for other types of actives.

Even so, it is important to never use these newer higher risk actives as single active substances and always mix them with alternative modes of action to help protect them.

Monitoring control levels post-application is important to help spot the first signs of unexpectedly poor performance, but remember fungicide resistance is not the only thing that causes poor field performance.

Poor control can be caused by too low a dose or poor / mistimed applications.

Reducing the risk of resistance

As with herbicides, fungicides are also at risk from their targets developing resistance to them, either through mutation or natural variation and selection.

Resistance can develop rapidly – usually through a single mutation in the target site where the fungicide binds to the pathogen – as was the case with strobilurins and the infamous G143A mutation.

Diseases, such as septoria, mildew and ramularia all carry this mutation meaning that group of chemistry is no longer effective.

But it can also be much more of a slow burn, with a series of mutations meaning the pathogen population becomes progressively less sensitive. That’s the case of azole fungicides and septoria.

Intensity of fungicide use drives the selection of resistance – higher numbers of treatments, particularly repeated use of the same mode of action, and higher doses result in faster selection of insensitive strains.

The following points highlight what should be included in a good anti-resistance management strategy: