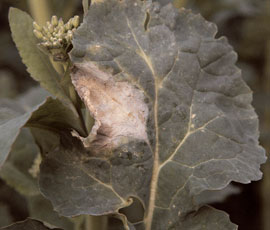 The highest ever recorded levels of light leaf spot were found in oilseed rape crops earlier this season, according to new survey results.

Levels of the disease have been rising steadily year-on-year and this year’s results were the highest since Fera monitoring started in 1987. In recent years, phoma canker has been the most prevalent disease, but levels have started to decline and light leaf spot has this year gained predominance as the most common disease of oilseed rape.

At pod ripening, light leaf spot was present in 97% of the crops surveyed with 82% of crops showing symptoms on the pods. Regional analysis shows that the few crops which remained unaffected by the disease were in the Eastern region and confirms the historic trend of the disease being more prevalent in the North and West of the country.

At the start of the 2011-12 growing season, light leaf spot levels were slightly lower than those seen in previous years. However, it was during stem extension in the spring when these levels started to increase, with incidence at this point being the second highest recorded since the survey began. As the disease favours cooler, wetter conditions disease levels continued to rise throughout the remainder of the season.

Levels of sclerotinia, botrytis and alternaria were also much higher than those seen in previous years. Sclerotinia stem rot affected 10% of crops in the survey – the highest incidence since 2008, says the report.

Annual monitoring of winter oilseed rape diseases is carried out by Fera in collaboration with ADAS and NIAB TAG as part of the national crop pest and disease surveys funded by DEFRA.

What were the lessons from last season for oilseed rape growers?