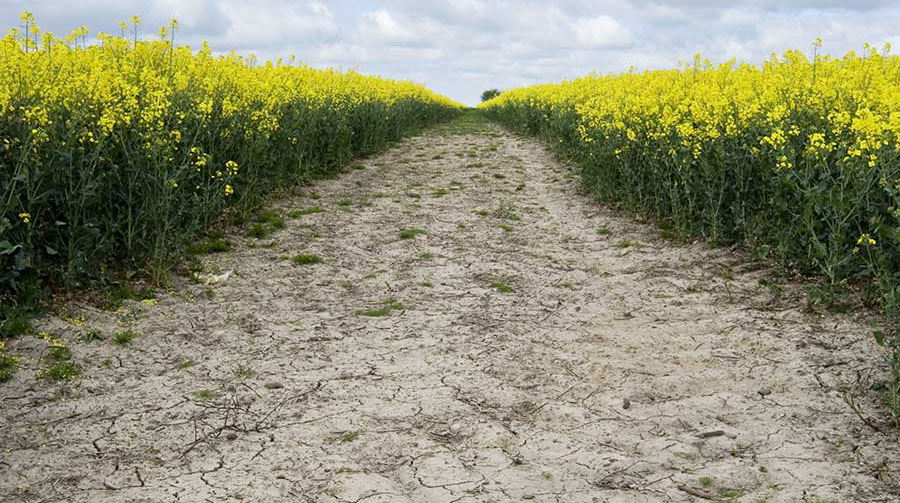 Climate change and agriculture are intrinsically linked – food production is the biggest contributor to global warming and suffers the most from its effects.

This was the focus of the final Arable Horizons talk held at Aurora centre of the British Antarctic Survey in Cambridge.

Although a number of climate change sceptics remain, the scientific evidence showing the Earth warming at an unprecedented rate is overwhelming.

While its precise impact on future weather patterns is unclear, one certainty is a fundamental change to food production systems is required to adapt to more extreme climate and reduce farming’s contribution to global warming.

Climate change is caused by the build-up of greenhouse gasses in the atmosphere – predominantly carbon dioxide, methane and nitrous oxide – that act like a blanket around the planet.

Average global temperature records show a steady linear rise from 1880 to the present day – a trend predicted to continue for the foreseeable future.

Watch the video of the talk and read the full report below.

Tim Benton was speaking at the fifth and final Farmers Weekly Arable Horizons lecture. The series of talks, in association with Syngenta, have explored tomorrow’s farming technology.

Find out more about Arable Horizons, and to catch up on all the lectures.

Tim Benton, professor of population ecology and global food security expert at Leeds University, says we are already seeing an impact on the UK climate, which has historically had “Goldilocks weather”.

This refers to its typically moderate and predictable nature across seasons – not too hot, not too cold, clement wind speeds and reasonable amounts of rainfall throughout the year.

Prof Benton adds this predictability is being eroded by climate change, with extreme events such as the wet summer of 2012 becoming increasingly common.

“There’s data that supports this and anybody who lives outside is noticing we could have any seasonal weather in more or less any week of the year now.”

UK weather is moderated by the jet stream, a westerly moving belt of very strong winds 9-16km above the surface of the Earth that divide cold air around the Antarctic and warmer air to the south.

As the atmosphere warms and ice caps melt, the jet stream has become increasingly unstable and started to meander further from the confines of its usual path.

The UK’s maritime climate is particularly sensitive to these shifts, either pulling in hot air from the South, as it did in spring 2012 – one of the hottest on record – or cold air from the North as in spring 2013, where farmers lost thousands of sheep to snowstorms.

However, what is perhaps more concerning is the picture scientists are building on the wider impacts of shifts in the jet stream on global food production.

Prof Benton explains when he began working with the government on food and climate, there was a general lack of concern about the impact of changing extreme weather in the context of food security, as the thinking was if conditions are poor here, they were likely to be OK elsewhere.

This assumption has increasingly been proven wrong, with the meandering of the jet stream causing extreme or adverse weather in multiple places around the world at the same time, showing how vulnerable global food production is to extreme events.

“The risk of having multiple breadbasket failures simultaneously is much higher than we thought five years ago,” he adds.

Average temperature in the UK is on course to rise by 3.5C by the end of this century – putting our climate on par with the south of France. Were this to happen gradually, farming would be able to adapt through gradually changes in management and investment.

This is the best-case scenario, however, and Prof Benton believes it will be a far bumpier road as weather becomes much more variable and unpredictable.

In the worst case, there could be a step change in the pattern of the gulf stream – an ocean current that brings tropical waters from the Gulf of Mexico up into the Atlantic and provides warmth for the UK and north-west Europe.

There is a 10-30% chance over this century – but it could occur within decades – that this could be switched off and see temperatures in Europe plunge by several degrees, resulting in longer and colder winters, more frequent storms and a significant reduction in food production.

Elsewhere, Prof Benton says collateral damage would include tropical monsoons dropping south out of key rice-producing areas, plus increased desertification in sub-Saharan Africa and drought in the soya-producing Cerrado region of Brazil.

“If you put all those things together, perhaps a third of the world’s productive capacity might be switched off,” explains Prof Benton.

While this scenario is concerning enough, Prof Benton says there are potential social, political and economic problems such a fall in food production might cause, with the 2007-08 and 2010-11 food price spikes clear examples.

He explains how a one-third of 1% a drop in global grain production in each time period was caused by prolonged droughts in Australia and Eastern Europe .

This led to food riots in the Middle East and Africa and uprisings including the Arab Spring and Syrian conflict.

Closer to home, the fallout from mass migration was felt in the Brexit vote.

“Imagine what might happen if we lose a third of calorie production, and the consequences from the rationing of the calories produced between those that can afford it.”

More extreme UK weather patterns are predicted to be the most immediate threat to farming systems closer to home, with narrower odds on extended periods of wet or dry.

In addition, there is likely to be increased pest threats, such as aphids, and a higher prevalence of diseases such as fusarium in cereal crops.

How climate change effects will transform food production by 2030

Tim Benton, professor of population ecology and global food security expert at Leeds University outlines four possible solutions for how the UK agricultural industry can adapt and get used to weather extremes:

Can agriculture slow the acceleration of climate change?

Food production accounts for about 30% of global greenhouse emissions each year.

If nothing is done to reduce this contribution, the industry will single-handedly use up the Paris Agreement carbon emissions budget within the next 20-30 years.

At present, the global food production system generates about 76% of the world’s calories from just eight crops; only 40-50% of that output is consumed.

This inefficiency is due to an abundance of cheap food, which supports a vicious cycle of waste, overconsumption and health problems, environmental damage, increased demand and ever more climate change.

To make a difference to greenhouse gas emissions from agriculture, Tim Benton, professor of population ecology and global food security expert at Leeds University, says not only does production need to become more efficient by moving from free-trade global markets to more locally produced food, but society must also change its diet.

Doubling food production at all costs to feed a growing population is now off the agenda and policymakers must look to make diets healthier and less meat-based and stop overproducing.

“We can’t expand land, so we have to tap into the 50% of inefficiency to free up enough land to deal with climate change.

Farmers should not bet on the future being “business as usual” with increasing globalisation and reliance on commodity crops.

“If we do that, we drive ourselves into a ratchet of climate change,” he says.

Improved agricultural efficiency is recognised as instrumental in tackling both the causes and the implications of climate change.

Syngenta invests about £1.1bn/year in global agriculture R&D. Syngenta’s advances in the field of crop plant breeding and agronomy innovation will help growers to cope with greater weather extremes and build greater resilience against the impacts of climate change.