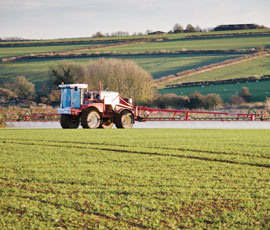 A protracted germination of blackgrass coupled with poor weather and cloddy seed-beds impairing pre-emergence herbicide performance will put even more pressure on Atlantis this autumn. But growers are being urged not to delay applications until next spring.

Blackgrass is one of the most prevalent grassweeds in the UK, with Atlantis (iodosulfuron + mesosulfuron) being the main herbicide used to control it.

BASF/ADAS 2012 dormancy results indicated that dormancy in blackgrass this autumn is high (90%), leading to a protracted germination period and concerns of a much higher emergence within crops, putting greater pressure on post-emergence herbicides such as Atlantis.

Independent agronomist Sean Sparling believes about 65% of blackgrass is still dormant (9 October) and will require farmers to be extra vigilant if they are to control it. “The biggest mistake growers could make is to go too early in autumn, and then come spring, when there is a flush of blackgrass, being unable to do anything.

“If blackgrass plants are at the one-to-two leaf stage in the majority of the field, then you need to apply the Atlantis. It would be a big mistake to wait, as blackgrass would be much harder to control effectively once it’s past this stage.” says Mr Sparling.

Bayer CropScience combinable herbicides manager Chris Cooksley believes the high dormancy should not be something farmers worry too much about. He advises farmers to forget the calendar, “get out into the field” and follow three basic principles for determining when to spray.

“First, you need to ensure there’s active growth, which shouldn’t be a problem with the current moisture in the soil. Next is size – it should be at leaf stages one to three, which although is normally at the end of October, could vary this year. And finally, most have emerged.”

Mr Cooksley warns farmers against being cautious and leaving it until the spring, by which time it could be too late. “There is also the uncertainty of when you are able to get on the field.”

He urged farmers not to be put off by the disappointing performance last autumn, highlighting that with moisture in the soil this year, conditions are more ideal for an autumn application.