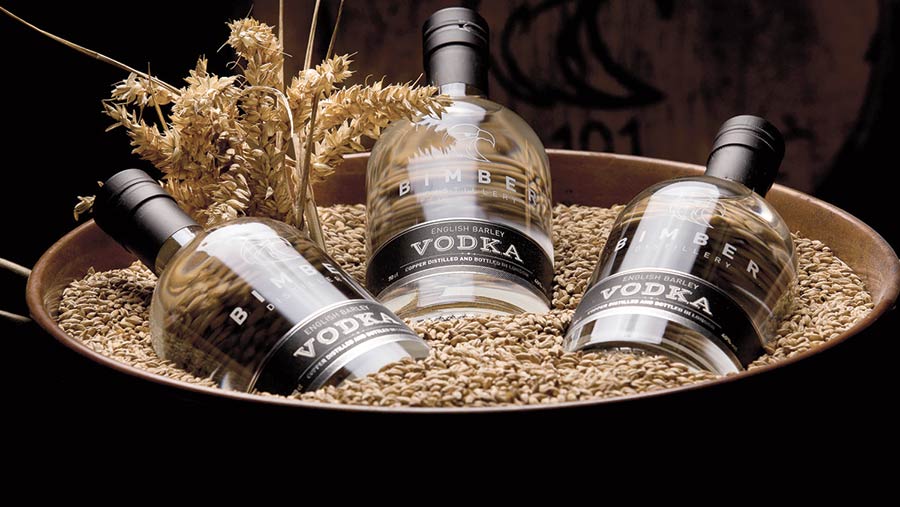 An expanding band of barley growers in southern England is producing low-nitrogen grain destined for the spirits market and earning themselves a useful price premium.

Having a secure domestic market for their grain rather than relying on exports, which may be liable for tariffs as Britain prepares to leave the European Union, could be a good move in these uncertain times.

In the second of our three-part series, David Jones visits two of these growers in Hampshire to find out how they are meeting the tough demands of the distilling industry.

Chris Allen is the only malting barley grower supplying the uber-trendy gin and vodka brand Bimber, which he hopes will shelter him from the cold winds of Brexit.

His spring-sown barleys are malted in Wiltshire and transported to the four-year old Bimber distillery in London which will help to insulate Mr Allen from the uncertain world of grain exports as Britain prepares to leave the European Union.

“The grain is being used in this country for distilling so we are not dependent on exports, and therefore we are helping to Brexit-proof our business,” he tells Farmers Weekly.

He is farming in traditional malting barley country of light chalky soils, and in eight years of growing the old distillers’ favourite variety Concerto has always ducked under the maximum 1.65% grain nitrogen demanded.

Even in a difficult 2018 beset with a cold, wet spring and a summer heatwave, his 180ha of the variety turned in a yield of just over 6.5t/ha of sub-1.65% nitrogen barley sold to three big maltsters as well as feeding the Bimber stills.

Yields have varied from 6.3t/ha up to 7.5t/ha largely depended on the weather, so last year’s outcome was towards the bottom of this range – understandable due to the late spring and summer drought. 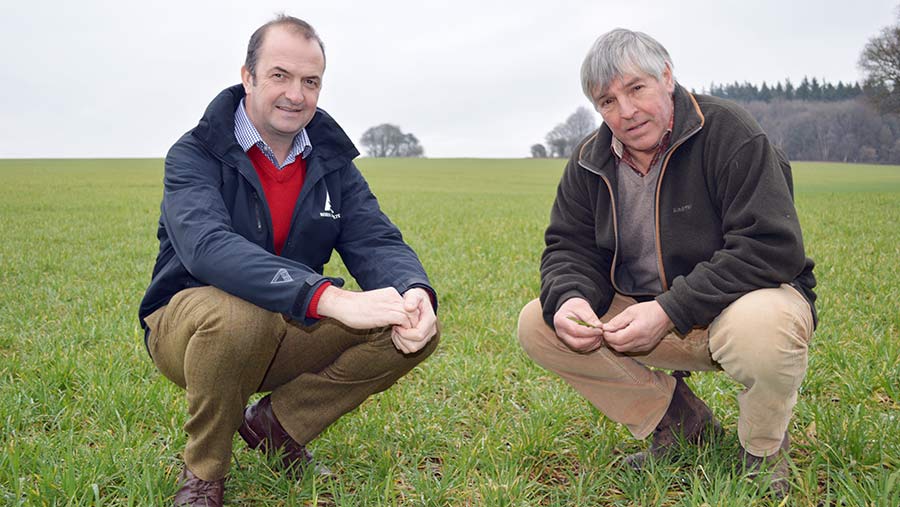 Hampshire-based grain merchant Robin Appel is instrumental in finding premium distilling markets for good malting barley like Mr Allen’s, not only across southern England but increasingly across Britain.

“We are looking to encourage farmers who can grow low-nitrogen barley while not jeopardising yields,” says Robin Appel’s group director Jonathan Arnold.

Distilling price premiums vary according to season, but range between £5-£30/t above brewing malting barley varieties such as Propino and Planet.

The almost insatiable demand of the Scottish whisky distillers is supporting these prices. as 55% of UK’s 1.9m tonne annual demand from the maltsters now head for the distilling stills, including the upmarket niche producers such as Bimber.

Soil types vary from chalky banks to clay caps and only the lighter land is used to grow the 180ha of spring barley, while variable rate drilling is used to cope with these variable soils.

His annual crop of 1,000-1,200t can head off to big maltsters such as Boortmalt, Crisp and Muntons or to Robin Appel’s small maltings at Warminster for small niche distilling users.

Even though Concerto is starting to be outclassed by newer varieties on yield, Mr Allen is impressed by the variety’s reliability, with no splitting of the grain or necking, or brackling, of the barley heads.

“We find the variety is incredibly consistent. In a wet year it shows little pre-germination, and in dry year, no grain skinning,” he says.

As long as there is a good demand for the variety, Mr Allen says he will continue to grow the variety, although newer ones such as Laureate show promise.

His nitrogen fertiliser strategy is aimed at applying 110-120kg/ha of solid ammonium nitrate – one-third just after drilling and two-thirds soon after at the three-to-four-leaf stage – and this has consistently given him low-nitrogen grain.

He aims to drill in the first half of March, not too early as some of his land rises to 195m (640ft), and he sows the crop at variable rates so cutting seed rates in the fertile valley bottoms and pushing rates up on the chalky hillsides.

Last year he only made a start in mid-April due to the late spring. However, good drilling conditions, high levels of sunlight and a high water table on his chalky soils helped his spring crops to the impressive 6.5t/ha average yield.

“We were incredibly surprised by the good yield after drilling one month later than usual and then the summer heatwave,” he says.

His grain impresses Polish distiller Dariusz Plazewski, who took to the farm’s barley when he set up his Park Royal craft micro distillery in north-west London in 2015, naming it Bimber – which is Polish for moonshine.

Mr Plazewski markets his spirit as English barley vodka, with his first aged whiskies due for launch in June 2019.

He also markets fruit-infused, oak-aged vodka and London Dry Gin made from wheat.

He likes Mr Allen’s barley for his vodkas and whiskies as it is sourced close to London and gives him good-quality grain in terms of low screening and big, bold barley, just what he needs for distilling.

Mr Arnold says the farm is one of about 30 across Hampshire, Wiltshire and Dorset, producing about 20,000t annually of top-quality distilling barley for his group, and he is on the lookout for more growers.

Jonathan Harley turned to growing the distilling spring barley variety Laureate in 2018, and was so impressed he is committing 90% of his spring area to the variety this year.

He believes that newer varieties, such as Laureate, are more vigorous and a lot quicker to develop than older ones, and also give him the opportunity to use less nitrogen fertiliser. 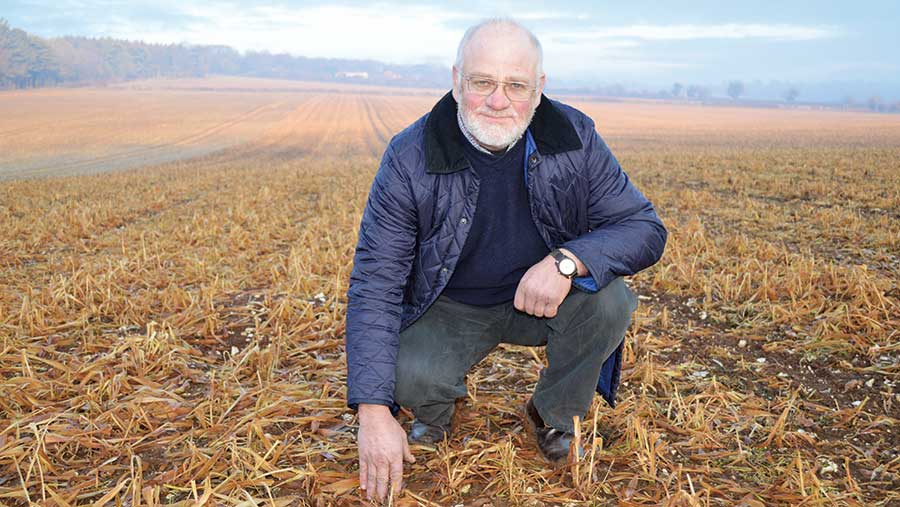 Growing for the domestic market on his Hampshire farm rather than hoping it will head for a boat at Southampton for export gives him more confidence as Britain prepares to leave the EU.

“All our barley is malted in this country, so there is more certainty for the crops we grow with Brexit around the corner,” he says.

He is growing 200ha of spring barley this year – 90% Laureate and the rest Diablo – as the Laureate last year on its first year on the farm outperformed other varieties Planet and Concerto.

His Laureate yielded 6.3t/ha over 100ha in 2018, which was half a tonne above Planet and Concerto last year using the same level of nitrogen fertiliser.

He usually applies about 120kg/ha of nitrogen, but last year, due to the dry weather, he cut back to 100kg/ha and managed to harvest a crop of 1.5-1.6% grain nitrogen and sold all the barley for distilling.

His aim is to drill in the second week of February with di ammonium phosphate (DAP) applied at drilling as his chalky soils tend to be low in available phosphate.

He looks to drill early as his crops can suffer in a dry April if the barley does not get its roots into the chalk.

He has moved to a narrow drill row width of 125mm (5in) with his tined Dale drill as he believes this prevents a lot of heavy heads being produced, which can easily snap off.

All nitrogen is liquid, with 60% applied as soon as the crop is through the ground and the rest two to three weeks later at the three-to-four-leaf stage.

Last year, due to the late drilling, 100kg/ha seemed enough, which was a little less than normal.

“This is a low-nitrogen farm and we are usually producing 1.4-1.5% grain nitrogen barley, which is all sold for distilling,” he says.