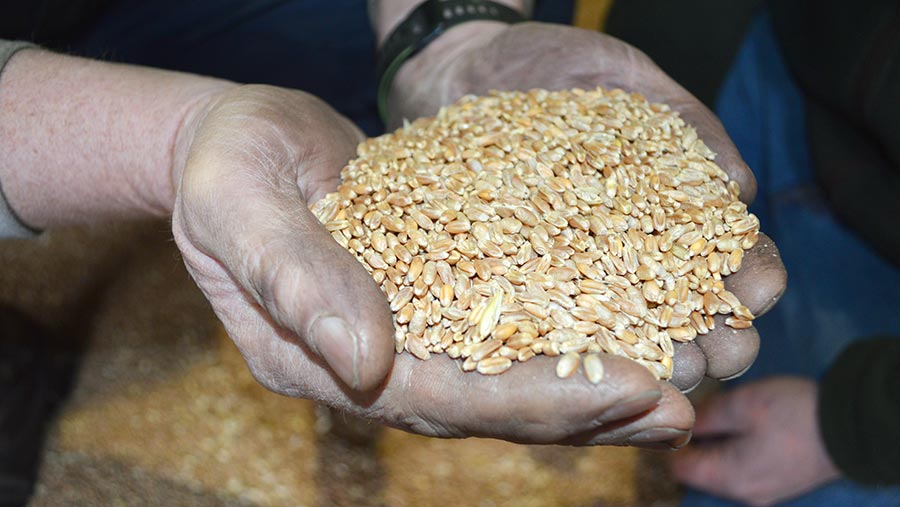 Crusoe makes up about 80% of Mr Lane's milling wheat area

A group of British farmers is growing milling wheat for the domestic bread maker Warburtons, earning a decent price premium and helping to insulate themselves from the worries surrounding Brexit.

As many worry about the effect of export tariffs, these growers can see their wheat ending up in bread products on the supermarket shelves and guaranteeing them a reasonable return.

In the first of a three-part series, David Jones talks to one of these wheat growers. Later he will meet up with other cereal farmers looking to earn a premium from home markets.

David Lane is growing milling wheat for one of Britain’s biggest bakers and believes doing this on a guaranteed price contract will help him cope with the uncertainties of Brexit.

With the UK trading relationship with the rest of the European Union clouded in the near future, he sees a minimum £20/t premium over feed wheat and knowing where his milling grain ends up as important benefits.

He is keen to work closely with his ultimate customers, and that’s one of the attractions of working with family owned bread maker Warburtons, while his milling winter wheat crop generally ends up being the most profitable on his Staffordshire farm.

“As we go through the Brexit process, I am looking for some certainties in an uncertain world,” he tells Farmers Weekly.

The price premium on his contracted 1,700 tonnes of Warburtons wheat can hit a maximum of £40/t over feed, but the £20/t guarantee is key when the milling premium can easily shrink below £10/t after a good national wheat harvest.

He was one of the first of 300 nationwide growers to supply the bread-making group, and generally hits the quality demanded even though his farm’s rainfall is slightly higher than in the breadbasket of East Anglia.

“I like to be invested in the final product and see what happens at our local Warburtons bakery at Wednesbury,” he says.

The bread maker stipulates which wheat varieties it wants, bans the use of any foliar liquid nitrogen applied to the wheat ear, and then lets its farmers get on with growing their crops.

Warburtons’  quality specifications are a little lower than the industry benchmark at 12.5% protein, 225 hagberg and 76kg/hl specific weight, compared with 13%, 250 and 76kg/hl, but what the baker is very keen on is consistency for its bread ovens.

Mr Lane is growing Crusoe and Skyfall, two of the four varieties stipulated by the bread maker, with Crusoe taking up 80% of his milling wheat area and Skyfall the rest.

Crusoe is more reliable for protein and hagberg levels, while the variety’s Achilles heel – its poor brown rust resistance – is not a problem on his farm. Skyfall is slightly higher yielding but can disappoint with lower protein levels.

He budgets for a yield of 8t/ha to fulfil the contract, but in general sees medium-term average yields of 8.5t/ha across his light to medium soil types.

The result is that Mr Lane was one of three winners of the Golden Loaf award in 2014 for the best quality grain and service levels supplying the bread maker.

For the 10-plus years he has been growing for Warburtons he has generally hit the correct protein-hagberg-specific weight specification at the family-run 790ha Home Farm, four miles southeast of Lichfield on the edge of the West Midlands conurbation.

The nationwide co-operative Openfield is contracted to supply Warburtons with grain, and the co-op supplies all the certified seed, advises on the growing of the crop, and arranges transport for the grain to a third-party flour miller.

Mr Lane runs the farm with his son Matthew, recently back from studying agriculture at Newcastle University, and his brother Stephen. 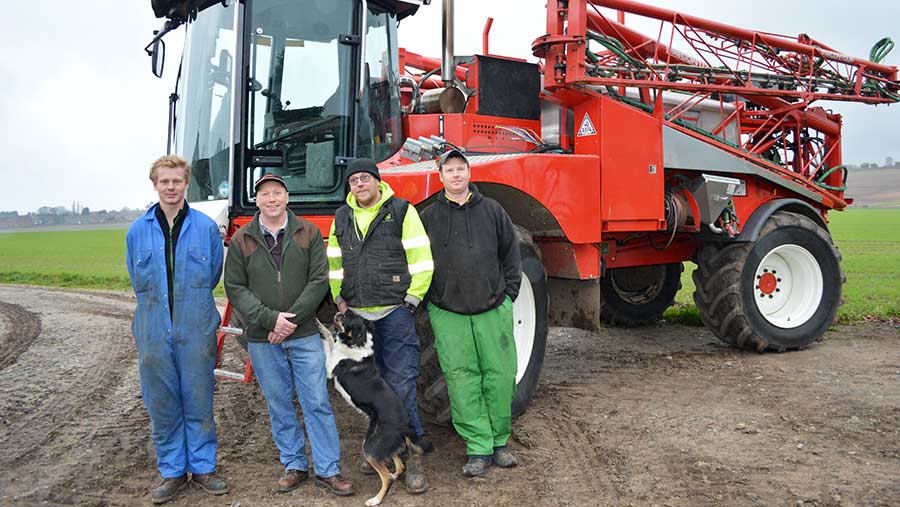 The majority of the 293ha of the farm’s winter wheat  is down to milling varieties, with only 40ha of feed wheat grown on poorer soils, so nitrogen strategy is key to hitting the correct protein.

A four-way nitrogen fertiliser split is used up to 260kg/ha of the nutrient, with sulphur added to the first dose as it is very important in the baking process. Nitrogen levels are cut to 220kg/ha when wheat follows oilseed rape or beans.

“We are looking to backload the nitrogen regime and so apply it later to manage the protein levels, and in most years we are hitting 12.5%,” he says.

That means a relatively small dose of ammonium sulphate in early March and then a switch to ammonium nitrate at end-March, each supplying 40kg/ha of nitrogen, with the main dose of 140kg/ha coming at the end of April. 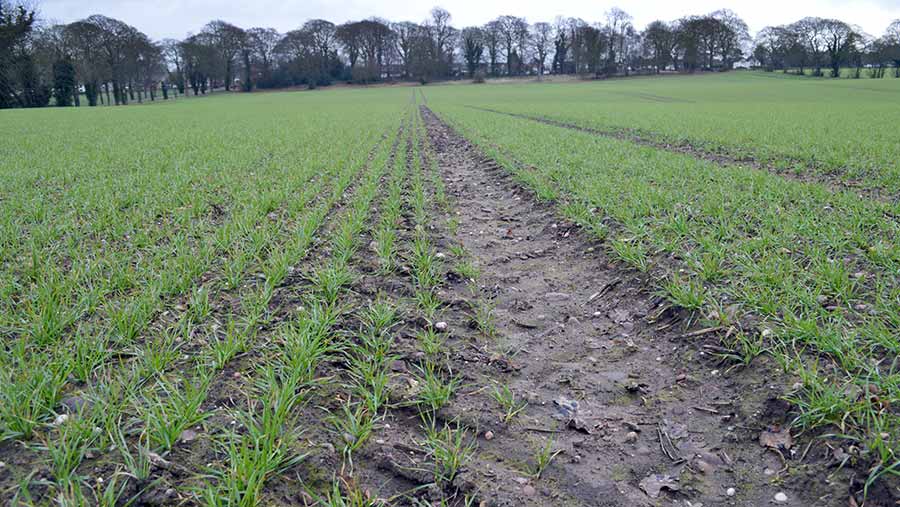 The final application of a further 40kg/ha is applied at the flag-leaf stage in early May. Any late applications of liquid nitrogen are banned as they are not deemed to produce the right type of protein in the grain.

At harvest time, usually in the second week of August, the priority is to cut the milling wheats ahead of other crops to protect the valuable hagberg level.

Hagberg is only a problem in a very wet harvest, and with annual rainfall at nearly 700mm, the farm is only slightly wetter than East Anglia, so hitting the right hagberg level is usually not a problem.

Protein levels can slip in a wet year when yields are higher on his light soils, but this is rarely a problem on the farm.

Septoria is the main disease concern as rusts are not often a problem, but there is an emphasis on treating his manganese-deficient light soils as crops low in this minor nutrient can be more susceptible to mildew.

Fungicide strategy is a fairly standard four-spray, two-SDHI programme, with an azole mix as a T3 head spray to protect the final quality of the grain.

With no blackgrass on the farm, delayed drilling is not essential so it takes place in late September and early October with a pre-emergence herbicide and then a spring tidy-up weed-killer used.

Mr Lane’s philosophy is that as he is farming good wheat land he is keen to look for the price premium on offer from the bread makers. A family-run farm is growing milling wheat for a family owned baker.

A British farm producing wheat for a British baker to feed British consumers perhaps fits in well for these uncertain times surrounding Brexit.

Read the series of three articles profiling cereal farmers who are finding secure contracts to help them face an uncertain future in a post-Brexit world.

The growers stretch from Yorkshire down to Kent and from Shropshire across to East Anglia, reducing the risk that localised weather can hit grain quality at harvest.

The Lancashire-based baker buys annually about 150,000 tonnes of UK wheat out of its annual needs of 350,000 tonnes. The rest of its intake is high-protein Canadian spring wheat.

Its contract calls for 12.5% protein wheat, and Bob Beard, the baker’s cereal development director, explains that it looks for slightly lower protein than the more common 13% demanded by other bread makers as it restricts the use of extra foliar nitrogen on the wheat ear.

The UK-produced 12.5% protein wheat is milled by a third party and then blended with 15.2% protein tariff-free Canadian spring wheat to make the grist for its baking products.

The baker, headquartered in Bolton, likes the ethos of working with family farms and has been contracting UK farmers for more than 20 years, and there is currently a waiting list of wheat growers wishing to join.

It stipulates four varieties of wheat for its milling contract – Skyfall, Crusoe, Illustrious and the spring wheat Lennox.

School children on the farm

Mr Lane’s farm has joined a volunteer programme to show inner-city children around the farm, explaining where wheat comes from and touring around its sheep flock and chickens.

The scheme is funded by Warburtons through the Country Trust charity, and the baker pays for training courses and health and safety updates, and advises on an agenda for the visits.

Groups of 35 children aged 7-8, together with teachers and helpers, visit the farm in June and July to find out how the crop is grown and how it is treated with “plant medicines” or fungicides.

In the rest of the day, the children are shown how to brush down hedgerows to sees the insects that live there, such as ladybirds, see how potatoes are harvested and visit the farm’s livestock.

After two years of such visits, Mr Lane sees this as a very real part of his job, explaining where food comes from to his future customers.