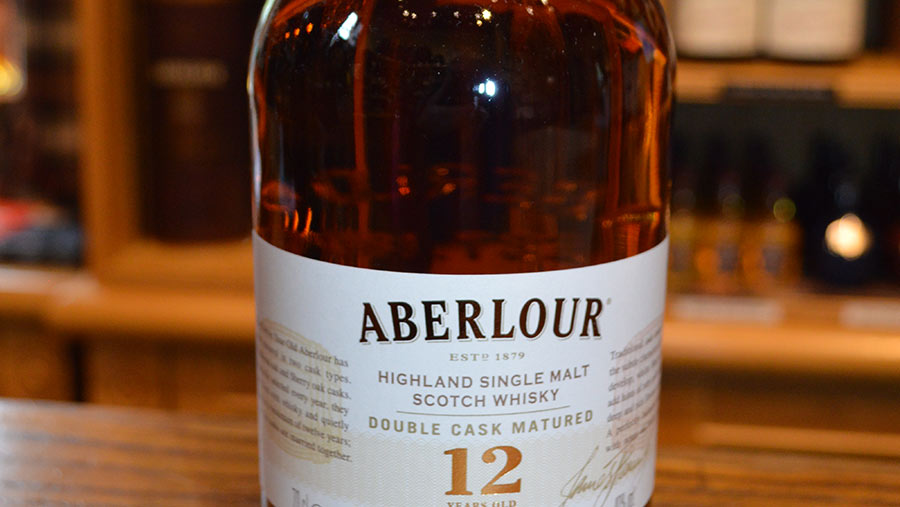 A group of Scottish malting barley growers is banding together to supply the needs of one malt whisky distillery to put them in a good position if the scotch cycle ever turns down.

Specialist spring malting barley farmers along the Moray Firth are growing grain for Aberlour, one of 100-plus malt whisky distilleries scattered across the highlands and islands of Scotland.

The Speyside distillery produces one of Iain Green’s favourite drams and prompted him to send 2,500t of his best barley to produce one of the industry’s top-selling single malt whiskies.

Mr Green’s family farm grows 722ha of spring barley from a base near the mouth the River Spey, with more than half the farm’s barley heading up the river to the well-hidden Speyside distillery.

“We are hoping that there will be a long-term gain so if the market ever becomes saturated then we will still get a good price premium,” he tells Farmers Weekly.

The current price for his Aberlour barley is the same as that of his other malting barley crops, but there are hopes of gaining a small price premium in the future.

There is also a hope that if the whisky industry takes a downturn as it did in the 1980s, when many small, less well-known malt distilleries were mothballed, he will have a ready market for his grain.

Fellow malting barley grower Frank Thomson also supplies Aberlour and is only two-and-a-half miles from his local maltings so he can deliver all his grain himself by farm tractor and trailer and is proud of the local providence.

The two farmers make up a group of 40 growers within a 15-mile radius of Aberlour growing for the distillery in the heart of malting barley country along the Moray Firth coast in north-east Scotland.

The area boasts six big maltings – from Muir of Ord just west of Inverness to Buckie – feeding the stills of the biggest concentration of malt distilleries in Scotland dotted along the banks of River Spey and its surrounds.

Spring barley is by far the biggest crop on Iain Green’s family farm and some of his fields have grown it continuously since 1962, albeit with plenty of cattle and pig manure. 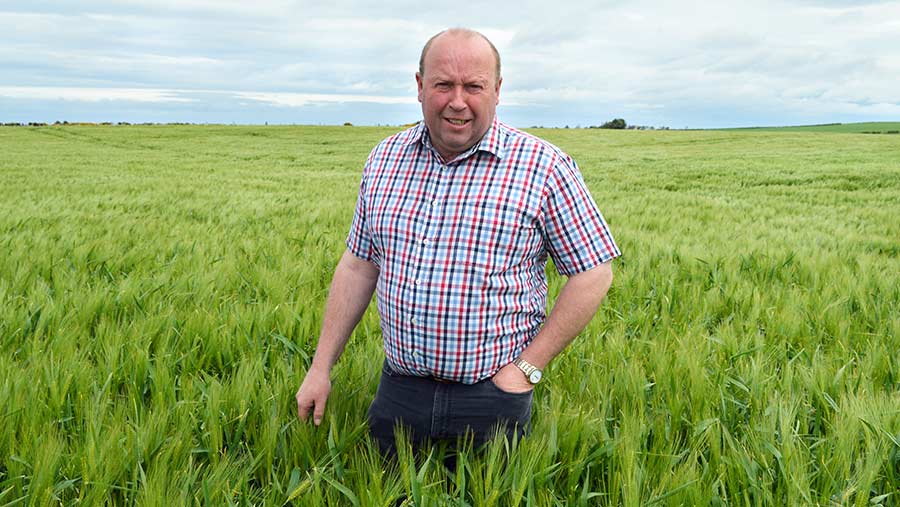 His light, sandy loams are ideal for growing grain of the low nitrogen content to suit the demanding maltsters, and it is a reliable crop when markets for wheat in northern Scotland are uncertain.

Winter wheat tends to be more profitable than spring malting barley, but in a wet harvest and when the big industrial grain distilleries switch to imported maize instead of home-grown wheat and the price dips, then malting barley becomes a much more attractive proposition.

The spring-sown crop suits the dry climate and long, summer days along the Moray Firth as it can be drilled early, ripens quickly and be cut in mid-August, whereas winter wheat can be late to harvest and suffers if September turns wet.

This year, the farm has moved towards Laureate, with almost 60% of the area in the variety, or 440ha, with the old favourite Concerto now abandoned due to its lower yields.

Last year, the bulk of the barley was 50:50 split of Laureate-Concerto. 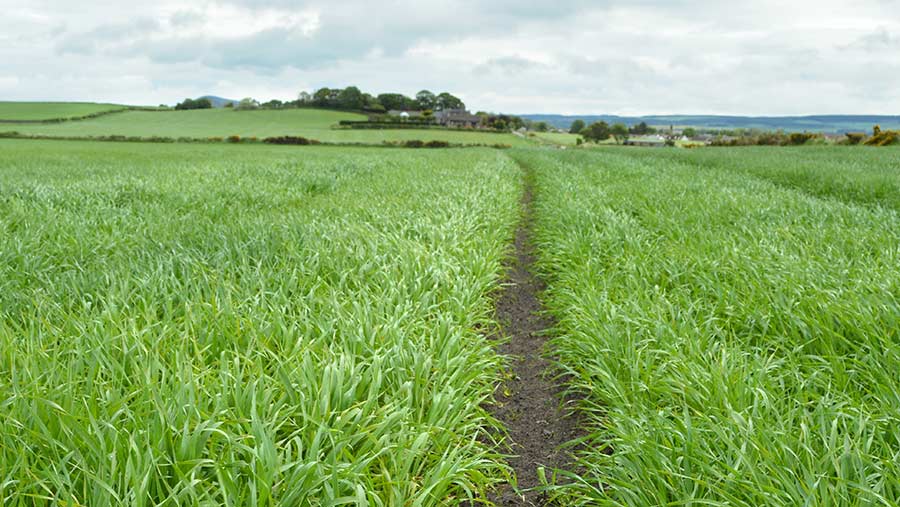 Other varieties include 80ha the new variety Diablo and also the specialist high nitrogen variety Fairing used for malt in grain distilling.

The farm generally hits the 1.65% nitrogen content demanded by the maltsters at an average yield of 6.5t/ha, and Mr Green is sending 2,500t of his annual production of 4,500t to Aberlour.

All land destined for spring barley is ploughed, with the straw baled for the farm’s stock.

Heavy land is ploughed in November and lighter land in January and February.

Minimum tillage has been tried on the farm, but has often led to poor crop establishment, greater weed problems and poorer yields.

“Establishment is so important and ploughing works well for us, especially on land where we have out-wintered cattle,” he says.

Drilling gets under way in early March using a power harrow and drill combination, with the sowing rate aimed at 360 seeds/sq m to give about 330 plants/sq m.

A compound nitrogen-phosphate-potash fertiliser is used in the seed-bed with sulphur added.

The land is generally high in phosphate from all the manure, while variable rate potash has been used for the past nine years.

Applying seed-bed nitrogen is a tricky calculation because the amount of manure used on the farm and also with 60-80ha of grass leys being ploughed up each year.

The crop is top-dressed with liquid nitrogen at pre-emergence, or up to when one to two leaves are visible, and the usual total nitrogen rate is 88-119kg/ha, and never going above the higher level.

“It’s critical to get the nitrogen right, and we have to treat each field individually depending on how much muck it has received,” he says.

Manure and slurry are applied using the farm’s soil maps, as he is always looking to maximise yields while controlling inputs and keeping a good level of soil fertility.

Generally, one or two fungicides are applied along with manganese on this light land, with mildew and ramularia the main disease concerns.

Low annual rainfall of 680-710 mm means that rhynchosporium is not the problem it can be over in wetter neighbouring Aberdeenshire.

This season, the spring had been very dry with little rain from mid-March to mid-May, so heavy rain in late May and into June was welcome to a crop desperately in need of a drink.

With the European Union three-crop rule in place, Mr Green needs to be growing winter barley and wheat.

The hybrid winter barleys are used to feed the pigs, while wheat, some of which is grown continuously, has an average yield of nearly 10t/ha.

So spring barley has its place as a premium crop grown close to the marketplace and relatively early to harvest, during mid-August, for this area of northern Scotland. 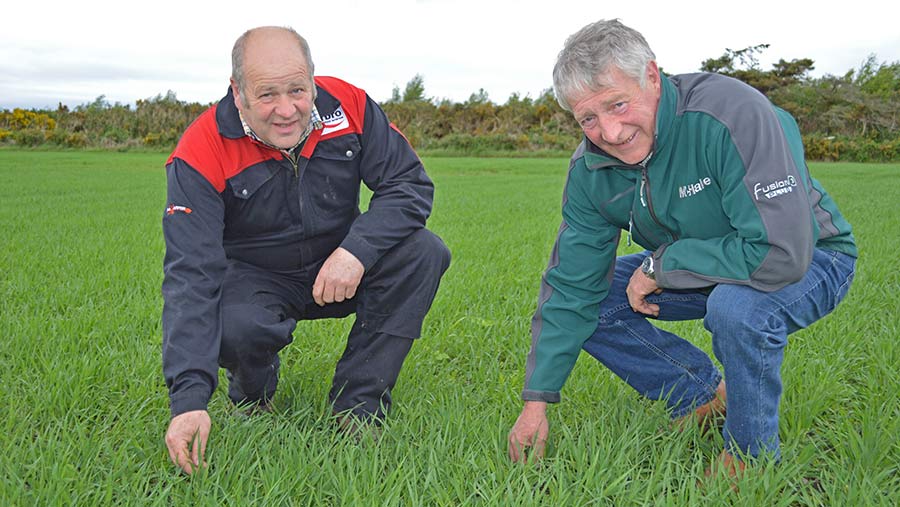 All his 2,500t of malting spring barley heads to the Crisp Maltings plant at Portgordon, two-and-a-half miles away, then the malt is sent up the Spey valley to the malt distillery.

“All our barley is supplied to Aberlour and in the future we might hope to see a price premium as there is obvious providence and traceability for the grain,” he says.

He farms with his brother Wilson and son Hugh across 800ha at Burnside of Tynet, just to the east of the mouth of the River Spey, with some 440ha of spring barley, and they have consistently produced good sub-1.65% nitrogen malting barley.

They have moved toward Laureate, with three-quarters of the farm’s area down to the variety, but the farm still holds on to the older Concerto for the rest as the variety maintains its head well in exposed sites at harvest.

“We are seeing how Laureate handles as we must go the way of improved varieties with increased yield,” he says.

The Laureate is generally yielding  6.9-7.5t/ha compared with Concerto at 6.25t/ha, on the farm’s light, sandy loams, just inland from the coastal towns of Portgordon and Buckie.

Most of the land is ploughed after straw is removed and disc pressed, and then is ready to sow with a combine drill at a seed rate of 200kg/ha with 38kg/ha of nitrogen along with phosphate and potash.

A top dressing of 75kg/ha of liquid nitrogen is applied as soon as the crop is through the ground with sulphur also added, to give a total nitrogen of 113kg/ha.

“The top dressing goes on as quickly as possible after drilling as we don’t want it affecting the nitrogen content of the grain,” he says.

“Spring barley is an important crop for us as it comes to harvest in the first two weeks of August and so is a good entry for oilseed rape,” he says.

The group of 40 growers is coming up for its fourth spring barley harvest supplying Crisp Malting at Portgordon, which then produces 100% of the malt for the Aberlour distillery.

All growers are in a 15-mile radius of Aberlour and are supplying about 20,000t every year to the coastal malting plant.

Three grain merchants are the link between the farmers and the maltings – GrainCo, Duncan Grain and Frontier – and the contracts are largely based around a £20/t premium to November wheat futures.

However, Charlie Birnie, commercial director of GrainCo, which is the marketing arm of Tyne Grain co-operative, hints there may be a premium over the market price for the malting barley in the future.

“The advantage for the growers is that they are involved in the way the Scottish whisky industry is moving towards, and we will see how the contacts are tailored for specific growers in the future,” he says.

Aberlour is owned by the French drinks giant Pernod Ricard, which itself is the second biggest scotch whisky producer after Diageo, and Pernod’s top-selling single malt Glenlivet now has a similar scheme of growers following the lead from Aberlour.

Crisp at Portgordon is just one of six maltings along the Moray Firth coast, with Diageo having three at Roseisle, Burghead and Muir of Ord, Borthmalt at Buckie, and Bairds at Inverness.

Graeme Cruickshank, Aberlour’s operations manager, says the distillery is following its founder James Fleming, who, in 1879, established the distillery on the present site and being a local grain merchant would have sourced his raw materials locally.

“The partnership with Crisp has grown to build the relationship, not only with the maltster, but with the growers in the area, as we strive to become a more sustainable and responsible business,” he says.